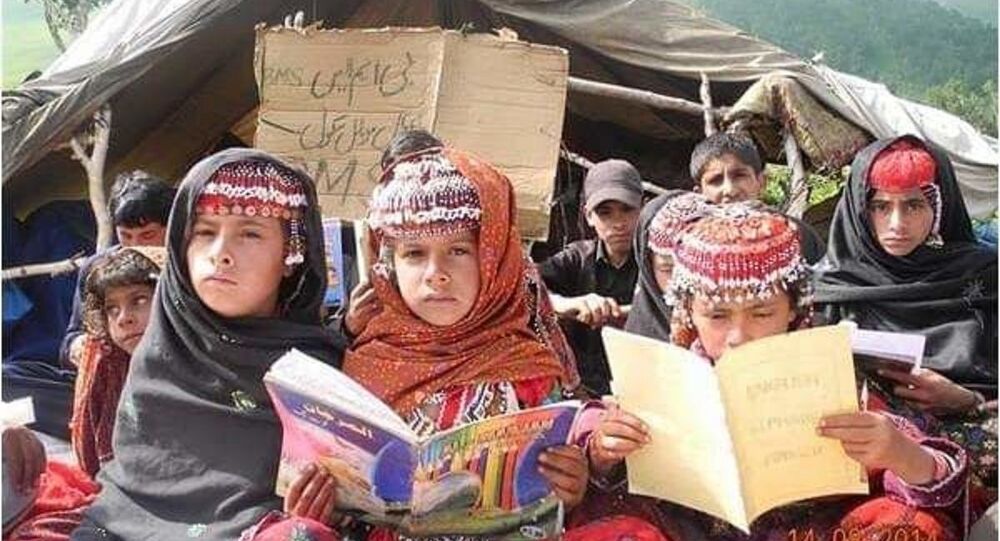 The Gujjar and Bakerwals community, also known as the shepherd tribe of Jammu and Kashmir, live in the Muslim dominated cold and hilly area of Kashmir during the summer, while in winter they migrate to the plains of Jammu, which is Hindu-dominated. These tribes are predominantly Muslim.

On 24 May, at least thirty people, including two women, five journalists and ten members of the Gujjar community were injured in clashes with forest officials in the Zhampatri area of South Kashmir’s Shopian district.

Among the injured, three people sustained serious injuries and were admitted to hospital.

​The clashes erupted after the forest department officials started an eviction drive in the area; Gujjar members resisted it.

“Forest officials are now trying to spread fear among the community, especially among women. Many of our community members received an eviction notice last year. But nobody can drive us out of these forests, they have been a home to us for ages and ages,” Showkat Shabir Choudhary, a Tribal Rights Activist told Sputnik.

“The forest department is clearly violating the rights of the forest dwellers. We demand the high court to intervene in the matter,” Choudhary said.

What Do the Police Say?

Police claimed that clashes broke out after Gujjar community members attacked them during the eviction drive. At least 15 officials received injuries during these clashes.

Sheikh accused Gujjar community members of encroaching upon government land for the past two years.

However, the tribes denied these charges and tribal activist Chaudhary underlined that it was only in March when 30 families settled in the Zhampatri forest. "Before that, they were in plains of Jammu,” Chaudhary added.

"Why did fifteen police, along with journalists, come to serve us an eviction notice? And why were only our people admitted to hospital?” Chaudhary said while countering the allegations made by police.

Who Are Gujjars and Bakerwals?

Gujjars and Bakerwals, are a nomadic sub-tribe which moves from place to place seasonally in the mountainous pastures of Jammu and Kashmir along with their herds of goats, sheep and horses. According to the 2011 Census, they make up approximately 12 percent of the population of the Union Territory, approximately two million.

The tribe of nomads mainly migrates to the region of Pir Panjal, Shopian, Rajouri, Chenab Valley, Kashmir Valley, and Kargil in Kashmir.

Gujjars mostly rear cattle and Bakerwals rear goat, sheep and horses for a living; both are scheduled tribes in India. Their main source of income comes from herding about a thousand goats, although some younger people have also started doing other daily wage works in cities.

Strategic Importance Of the Tribe

“Undoubtedly these people have acted as the eyes and ears of the Indian Army,” Brigadier Rumel Dahiya (Retd), former Deputy Director-General at the Institute for Defence Studies and Analyses told Sputnik.

“Be it the 1948 crisis or the 1999 Kargil war, Gujjars and Bakerwals has emerged as the trusted informant. But, over a period of time, the challenges posed by militancy are something else altogether, and the community has often been caught in the crossfire,” Dahiya said.

The community take pride in being called the “backbone of the Indian Army for manning borders”.

Back in 2003, around 300 militants took refuge in the shelters established by the Gujjar and Bakerwal communities in the Hillkaka area of the Pir Panjal range, in Poonch district. At the time, these militants held the indigenous community members as hostages. As a way to counter the militants, members of the Gujjar and Bakerwal communities who had managed to escape the hostage situation joined forces with security officials and led a Police Special Operation Group to the insurgent camps at an altitude of 11,000 ft.

“Operation Sarp Vinash lasted five months. Around 300 militants were hiding in shelters established in the inaccessible recesses of the Pir Panchal range. Over 60 militants were killed in the operation,” Dahiya added.

The tribal leaders and local media reports confirm that communities have received notices from the forest officials for 18 months, which classify their structures, whether permanent or mud houses, as being the illegal occupation of forest land.

In November last year, at least 15 temporary structures in the Pahalgam areas of Anantnag district were demolished by the forest department. The forest officials said that the land had been illegally occupied by these people.

Since the scrapping of Article 370, the Forest Right Act (FRA) 2006 got extended to the Union Territory of Jammu and Kashmir.

​The Scheduled Tribes and Other Traditional Forest Dwellers (Recognition of Forest Rights) Act gives them the rights to access, manage and govern forest lands and resources within village boundaries.

This act protects these tribes from forced displacement, and under this act, they also have grazing rights and access to water resources.

Technically, the law should have been implemented in 2019, but the Bharatiya Janata Party (BJP) administration delayed it. After a protest by state activists, it promised to implement the act in November 2020. Now, the act is implemented in the state, “but, only on paper. In reality, it has not yet safeguarded the rights of the Gujjar and Bakarwal communities,” tribal activist Chowdhary added.

The BJP had cited the erstwhile semi-autonomous status of J&K as the main reason for the non-implementation of the Forest Rights Act. However, many state journalists and politicians believe that BJP doesn’t want to implement FRA 2006 in the Union Territory as they are acting against these nomadic people living in the forest.

The government officials explained that eviction is being carried out “following a high court order”.

In July 2019, the Jammu and Kashmir High Court directed the government to refrain from encroachments into forest land. The region’s forestry department had stated in the court that 64,000 people have illegally occupied 17,704 hectares of forest land.

Another tribal activist, Guftar Ahmed, alleged that BJP is trying to change the demography of the region by attacking the “most vulnerable people of society”.

“Even the 24 May eviction drive was launched after a local BJP leader, Javid Ahmad Qadri, addressed a press conference in Shopian saying nomads have encroached upon the forest land,” Ahmad said.

According to Ahmad, his tribe has become an eye in the storm of the BJP since 2018.  After an upper-caste Hindu murdered an eight-year-old Bakerwal girl in Kathua, a district in the Jammu division, right-wing activists had called for a social and economic boycott of these communities.

Mohd Zulkarnain Chowdhary, a community activist and advocate by profession, also feels that BJP is trying to change the demography of the state before holding assembly elections. Even after implementing the Act, “they are saying nomads are illegal encroachers. No, those nomads belong to the tribal community of the state.”

“The authorities are sending eviction notices selectively to the people of the Gujjar-Bakerwal tribal community. They just want us to settle in the Jammu plains, which is Hindu dominated area, which will also change the voting demography,”  Zulkarnain Chowdhary alleges.

The former chief minister of the region, Mehbooba Mufti, who had formed a government in alliance with the BJP in the past, said the eviction is part of an illegal process that started with the stripping of the region’s special status last August by the government of Prime Minister Narendra Modi.

A gujjar from Kellar in Shopian was beaten to pulp by the Forest department. On one hand this administration makes tall claims about the implementation of Forest Rights Act while at the same time they continue to hound & persecute these communities. pic.twitter.com/xaCxa3uS6F