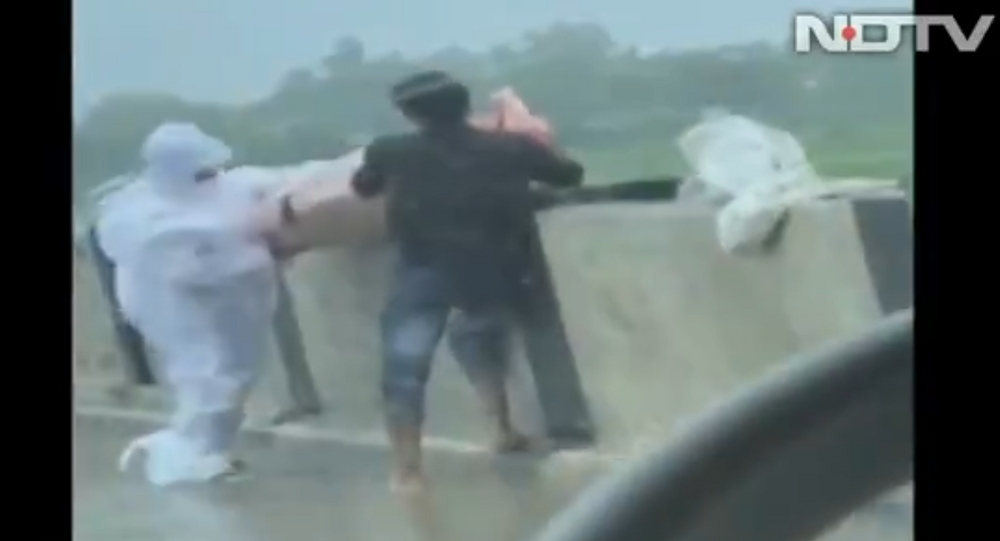 The video has come to light days after several bodies, allegedly of Covid patients, were found floating in rivers in India. The incidents shocked people around the world and led to immense criticism of local authorities, prompting the government to investigate who was responsible.

A video of a Covid patient's body being thrown into a river by two men in Uttar Pradesh, India has been shared by the news channel NDTV.

The incident was recorded by unidentified people who were driving by the spot in the State's Balrampur District on 28 May.

In the video, two men, one of them in a PPE suit, are seen lifting a body on the bridge which is built over Rapti River in the district. The PPE-clad man can be seen tinkering with the body and he seems to be trying to get it out of the body bag.

The Chief Medical Officer of Balrampur later confirmed that the body was actually that of a Covid patient whose relatives were trying to dump it into the river, NDTV reported.

Warning: Some viewers may find the following video disturbing.

A case has been filed against the relatives and the body has been returned to the family.

Earlier this month, thousands of bodies were buried in shallow graves by the holy river Ganges; many others were dumped in the river, making headlines around the world.

Following an uproar, the Indian government ordered several states to prevent dead bodies from being discarded in rivers. The central government also directed the states to increase patrols along the riverbanks to stop such activity.

As per media reports, the bodies had washed up on the banks of the Ganges River in parts of Bihar and Uttar Pradesh states earlier this month. In the Buxar district of Bihar, 71 bodies were retrieved from the riverbank. Thousands of other bodies have been found buried in the sandbanks of the Ganges. Local authorities opined that the bodies could have floated up during high tide.

The second wave of coronavirus has devastated India and its healthcare system. According to the federal Health and Family Welfare Ministry, India has recorded a total of 325,972 deaths and over two million active cases.