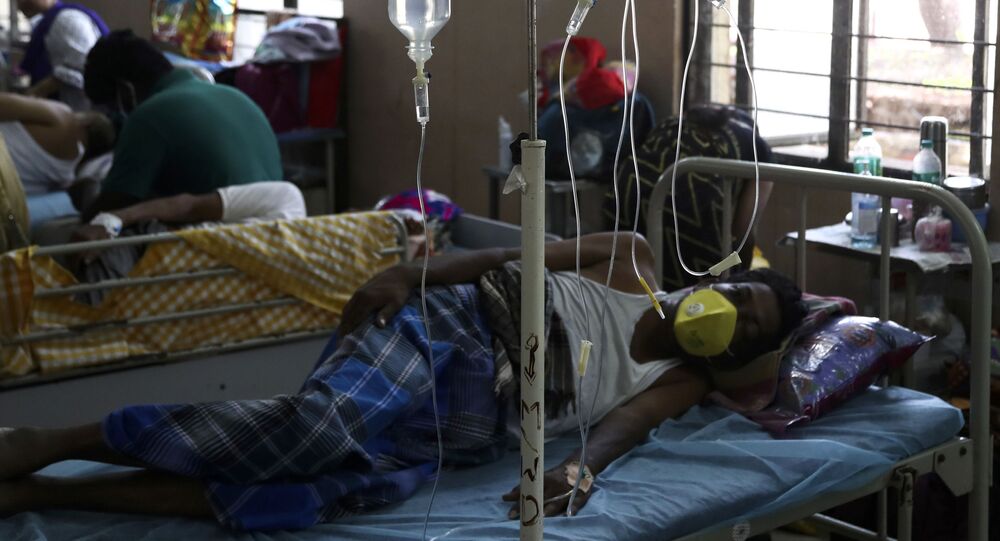 US Sends 200,000 Doses of Black Fungus Drug to India Amid Shortage

US-based pharma firms like Gilead Sciences and Mylan will be supplying a total of one million doses of AmBisome (Amphotericin B injection), a crucial anti-fungal drug used in Black Fungus treatment, amid the shortage of the drug and rising cases of the rare fungal disease across India.

India's Ambassador to the United States Taranjit Singh Sandhu announced on Sunday that another consignment of AmBisome (Amphotericin B injection), a crucial anti-fungal drug used in Black Fungus treatment, has reached India.

"Total 200,000 doses already there so far," Sandhu said. The consignment has come after Indian Prime Minister Narendra Modi instructed officials to procure Liposomal Amphotericin B injections from anywhere they could, anywhere in the world.

Another consignment of AmBisome from @GileadSciences, used in Black Fungus treatment, reaches India. Total 200,000 doses already there so far. More to follow! pic.twitter.com/Vka0mQb2bK

On Friday, India received 50,000 vials of Amphotericin-B from US-based pharma firms like Gilead Sciences and Mylan.

As per reports, Indian missions to various countries are trying to secure supplies of this life-saving drug and due to their efforts, Gilead reached out and sent the life-saving drugs to India.

The American biopharmaceutical firm Gilead Sciences is working on accelerating the supply of Liposomal Amphotericin B injections (AmBisome) to India. The company will be supplying a total of one million doses of AmBisome.

Meanwhile, procurement is being facilitated by Mylan, a global generic and speciality pharmaceuticals company.

50,000 vials of #AmphotericinB arrives at Mumbai Airport.
We are putting in a lot of efforts to meet its requirement in the country.
I am thankful to @GileadSciences and @MylanNews for their outstanding support in India's fight against COVID-19. pic.twitter.com/I0QjP0qHTL

Due to the mounting number of Black Fungus or Mucormycosis cases, the Indian government has been trying to ramp up domestic production of Amphotericin B.

The government has awarded licenses to five pharmaceutical manufacturers to produce the drug, in addition to the five that are already involved in its production. The Indian states have been hit hard due to a shortage of Amphotericin B injections.

The fungal infection has wreaked havoc, especially in Covid-19 patients. Many states have declared this fungal infection as an epidemic disease, including Madhya Pradesh, Rajasthan, Uttarakhand, Tamil Nadu, and Bihar.

India has reported over 12,000 cases of Black Fungus so far and most of these cases are being reported in Maharashtra and Gujarat. According to doctors, excessive use of steroids and the use of industrial oxygen are some of the possible causes of this sudden outbreak, which may lead to the loss of jaws, eyesight, or even death.