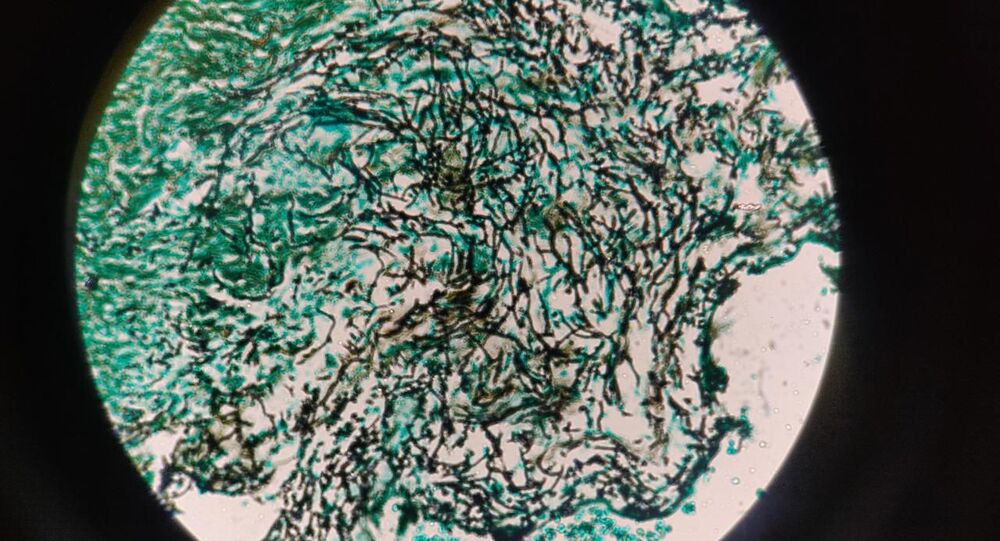 With COVID cases gradually decreasing in India, the spread of black, white, and yellow fungus has wreaked havoc now. Recently, two rare cases of black fungus affecting the small intestine were reported in India's capital city and now a rare case of white fungus causing holes in multiple internal organs has been reported.

A 49-year-old woman who was admitted to Delhi's Sir Ganga Ram Hospital has been diagnosed with a rare case of white fungus causing holes in the food pipe, small intestine, and large intestine.

She was admitted to the hospital on 13 May after complaints of severe abdomen pain, vomiting, and constipation.

Talking about the reasons behind the complications developed in the women, Dr (Prof) Anil Arora, chairman of the Institute of Liver, Gastroenterology and Pancreaticobiliary Science told Sputnik: "She had undergone breast cancer surgery in December and had received her chemotherapy until four weeks ago. She also contracted COVID-19 which made her immunity very low".

"There were holes in the food pipe, small intestine, and large intestine due to white fungus. White fungus is normally present in the body but due to her low immunity the fungus caused the damage", he added.

"Normally the intestine remains in perfect harmony with the fungus called Candida. In immunosuppressed states like diabetes, injudicious use of steroids, overzealous broad-spectrum antibiotics and chemotherapy for underlying malignancies, there is inward migration of the white fungus from the intestinal lumen into the body tissues by disrupting the normal gut barriers. This is followed by intestinal complications like ulcers, bleeding, gangrene, and perforation followed by transmigration of the white fungus across the beleaguered gut barrier into the blood culminating in septicemia and multiorgan failure", Dr Arora explained.

A CT scan of the woman's abdomen revealed free air and a moderate amount of free fluid in the abdominal cavity. She was taken for surgery on 14 May and doctors placed a tube inside the abdomen and drained about one litre of bile-stained pus.

The dead part of the intestine was removed and sent for a biopsy. "The biopsy report revealed the presence of a severe ulceration of the intestinal wall with resultant perforation and necrosis (a form of cell injury) caused by white fungus", Dr Arora said.

The woman underwent a second surgery for a small leak five days after the first operation.

Dr Arora said that "COVID-19 affects the lungs and upper respiratory tract. Infection of the intestine by the black fungus (Mucormycosis) secondary to steroid use has been recently reported but white fungus causing severe ulceration and gangrene of the intestine presenting with multifocal perforations in the food pipe, small intestine, and large intestine in the setting of COVID-19 infection has not been reported in the literature to the best of our knowledge".

According to the doctor, both surgeries were successful and the woman is now recovering.