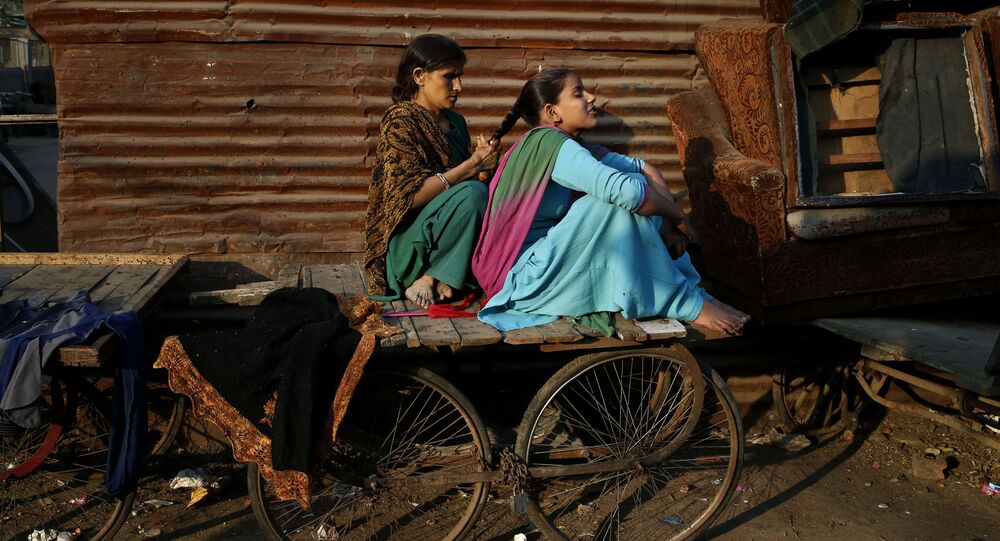 Dr Nazrul Islam, the officer in charge of the development research branch at the United Nations Department of Economic and Social Affairs (UNDESA) and the lead author of the World Social Rport (WSR) 2021, has spoken to Sputnik about the economic fallout of the devastating second COVID surge in India.

What's made the second COVID surge in India particularly worrisome is the impact on the nation's rural areas. As per the available data, almost 30 percent of the total COVID cases on record in April were those from predominantly rural areas, up from 21 percent of the national caseload in March. A four-fold increase in cases to May has also been witnessed in 243 districts classified as being the most economically backward in the country.

Experts believe the cases on record are just the tip of the iceberg, with many thousands more going unreported because of poor diagnosis and lack of adequate healthcare infrastructure in these rural areas as compared to the urban centres in the country.

As per the last federal Census carried out in 2011, almost 70 perdent of India's workforce lives in rural parts of the country, contributing some 46.9 percent to the overall gross domestic product (GDP). While the agricultural sector, one of the largest employers in rural areas, was the only one to grow last year as the country witnessed a historic GDP contraction and recession due to a COVID-induced lockdown, that too will be hit.

The grim COVID statistics in the countryside will have an adverse economic impact on overall economic growth, but more specifically in India's hinterland, worries Dr Nazrul Islam, the lead author of the World Social Report (WSR) 2021.

Sputnik: How badly will the rural parts of India be hit in economic terms by the second COVID wave? How will it affect overall growth?

Dr Nazrul Islam: The second COVID wave has had a significant adverse impact on India's growth. While the World Social Report does not provide country-specific economic assessments, DESA's other flagship publication, the World Economic Situation and Prospect that was launched on 11 May, projected India to have 7.5 percent growth in 2021 (calendar year). We should note that the forecast was made when we were just seeing the tip of the second wave in India and is contingent on the assumption that the country will manage during the second half of this year to expand vaccination to reach all demographics, including in regional areas.

Given the higher prevalence of COVID-19 in rural areas during the second wave and the dramatic impact of vaccination, it is imperative that villages and small towns are fully included in the vaccination campaign. India's economic growth is not just sensitive to supply-side effects, but it is also particularly dependent on household spending, as we saw last year when economic growth picked up rapidly as soon as restrictions were lifted.

We expect policymakers to take stock of the lessons learned from India's first wave as well as experiences abroad, tailoring local and regional restrictions to maximise their epidemiological impact while minimising economic harm.

Sputnik: India's agricultural sector contributed 19.9 percent to the nation's GDP last year, even as overall GDP witnessed a decline of 8 percent and India was pushed into a recession. Will agricultural growth be impacted this time around?

Dr Nazrul Islam: The crisis has pushed millions of Indian households into poverty, especially in rural areas. Strong agricultural development could thus be a powerful lever to remedy the disastrous impact of the crisis. Fortunately, trade and investment are expected to pick up in 2021 thanks to continued government stimulus and improving external conditions, which should benefit agricultural growth.

However, rapid and comprehensive vaccination and well-targeted stimulus measures are absolutely critical to unleash domestic demand and to reduce COVID-19-induced supply-side bottlenecks.

Sputnik: We are also witnessing a reverse migration of workers from urban centres to their villages. What could the consequences be, particularly for the unemployment situation?

Dr Nazrul Islam: This year's WSR notes the possible long-term effect of COVID on reversing the rural-to-urban migration trend. Some countries' experiences during the pandemic have illustrated the possibility of rural populations engaging in employment traditionally considered urban, which has been made increasingly possible by improved ICT connectivity and other technological advances such as 3D printing.

The employment implication of a such reversal of people's movement would depend on the state of the labour market and the broader economic structure in rural areas. The WSR calls for governments to consider in situ urbanisation as a rural development model that enables living standards in rural areas to rise to urban levels.

And two key factors in the process of in situ urbanisation are the improvement of agricultural productivity and the expansion of productive rural non-farm economy. Without which, there will remain limited gainful employment in rural areas, and the reverse migration of workers from cities to villages will likely produce unfavourable labour market outcomes – not only in terms of unemployment, but also underemployment, and low wage growth, etc., in the long run.

There is evidence that suggests employment guarantee schemes – such as the one in India – have the potential of improving participants' incomes, which can be channeled into higher consumption levels and accumulation of assets. Such schemes could be an effective component of a social protection system going forward, but only if it is properly complemented by other parts of the social protection system.

For example, participation in an employment guarantee scheme would be infeasible for families without a working age member. In this case, social assistance schemes without work-related requirements would be necessary. An employment guarantee scheme would also need to ensure jobs offered in the scheme match the skills of the workers and the wages are commensurate with the tasks being done for it to be effective.

Sputnik: Is liberalising Indian agriculture a solution that may help in attracting foreign investment and boosting farmers' incomes? That seems to be the government's logic in introducing the new farm laws, which have triggered protests by farmers.

Dr Nazrul Islam: Until recently, rural development was considered an appendage of urban development. It was assigned a residual role, mainly as a source of labour for the expansion of urban economies. Unfortunately, such a residual view of rural areas has often not been beneficial for either rural or urban populations. In this sense, the efforts to improve farming by boosting productivity and revenues is helping to return agriculture to its preceding role in development, as the WSR argues.

Agricultural reforms should be done with the well-being of farmers in mind. Recent protests by Indian farmers show the necessity of rural development strategies that balance technocratic solutions with an understanding of social and political concerns.

More importantly, liberalisation reforms for productivity growth must be accompanied by efforts to improve outcomes for rural communities, offering them a path towards better lives and livelihoods, and ensuring sustainable development for the country.

The WSR argues that policies should be designed to ensure that benefits accrue to communities and those most in need, and that preference should be given to agricultural models that support, rather than discriminate against, smallholders. The farmers' protests in India show the importance of moving rural development to the centre of attention.