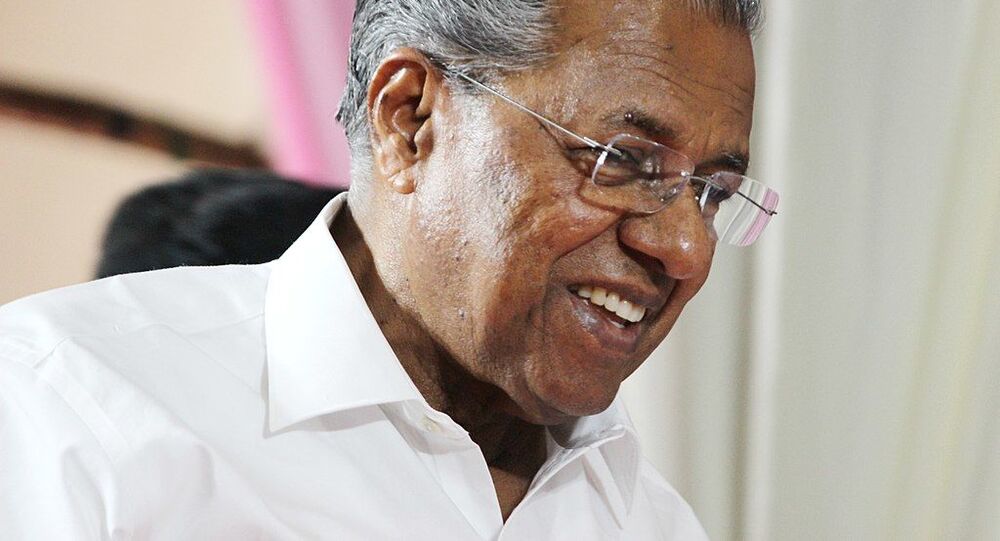 In a Pre-emptive Move, India's Left Takes Step to Save Kerala From Vicious Communal Politics

With a landslide victory, the Left Democratic Front (LDF) alliance formed the government in India's southern state of Kerala on 3 May. Detailed analysis of the poll results shows that support for the LDF from minorities, particularly the Christian community, has increased compared to previous general elections.

The swearing-in of Vijayan Pinarayi as state chief has unraveled Kerala’s political fabric on two counts. For the first time in forty years, the LDF has become the first front to secure a second consecutive term. All the earlier elections saw votes swinging in favour of the LDF and the Congress-led United Democratic Front (UDF) alternately every five years. Secondly, for the first time, the state chief has kept the crucial minority affairs portfolio for himself.

Last week, there were speculations that the department would be given to V. Abdurahiman, but in an unprecedented move, Pinarayi kept it for himself.

© AFP 2021 / DIBYANGSHU SARKAR
BJP Will Surprise Everyone With Its Performance in Kerala: Ex-Minister KJ Alphons
The minority affairs portfolio came under the scrutiny of the courts and opposition leaders after the allegation that the then-minister KT Jaleel was trying to appease the Muslim community in the state while neglecting the concerns of the Christian community.

Not only did Jaleel come under fire from opposition leaders, but in April 2021 he resigned on moral grounds.

“Pinarayi has done extremely smart work by keeping the minority ministry to himself. It shows how seriously he considers the minorities in the state,” Rashid Kidwai, a political analyst, told Sputnik.

Kerala is a state where the minority population plays a decisive role in forming the government. Of the population of 33.34 million in the state, Muslims account for 8.8 million, while the Christian population stands at 6.1 million.

"We were not happy with the disbursal of minority welfare funds under KT Jaleel. Our community children were deprived of scholarship. As the state chief has taken over the control of the minority ministry, it is a kind of assurance for our community," Palackappilly stressed.

Bharatiya Janata Party (BJP), which failed to grab even a single seat in the state, is now eyeing the 2024 general election, leaving no stone unturned to woo the Christians in the state.

Former BJP state chief P.S. Sreedharan Pillai, targeting the Pinarayi government, has said that 80 per cent of the funds for the minority community are going to one particular group, and the entire Christian community is getting a mere 20 percent.

"It would be interesting to see whether he will do something to help Christians or not, let's wait and watch," Alphons added.

Calling the move "intelligent," Kerala-based political analyst NK Bhoopesh said, "The allegation of corruption in minority department was used by the BJP's parent organisation Rashtriya Swayamsevak Sangh (RSS) to drive home their point that the Muslims are unfairly benefitted in Kerala. RSS used this as another way to reach out to the Christian community."

"Now, when the state chief has taken over the minority department has, in fact, assured the Christian church their concerns are seriously addressed. And by doing so, the chief minister foiled the RSS attempt to capitalise on the subject and spread canards on Muslims. And also to keep Christian churches in good humour so that they don't drift towards the Sangh camp. This is an intelligent political move by CM Pinarayi Vijayan," Bhoopesh added.

Were Christians Really Swaying Towards the BJP?

The clear answer is “No”, says Rashid Kidwai, “seeing the 2021 assembly election result, it's not possible."

The state assembly result, which was announced on 3 May, saw the Communist Party of India-Marxist (CPI-M)-led Left Democratic Front (LDF) winning 99 of the 140 seats and the Congress-led United Democratic Fund (UDF) 41. In comparison, the BJP-NDA alliance became a cropper.

In the wake of the consecutive wins of the LDF, experts believe that the traditional voting pattern in Kerala has undergone some important changes.

With Hindu votes divided between the two main parties, the Christians prefer Pinarayi over the Congress alliance, which is reflected in Lokniti-CSDS's post-poll survey data. Christian majorities in 33 assembly segments, nearly one-fourth of total assembly seats, could have affected the results in constituencies across Ernakulam, Kottayam, Idukki and the Pathanamthitta districts.

According to the data, the main reason for the result could be that Congress tried to compete with the IUML in the hopes of attracting the Muslim vote, but it backfired on Congress as they lost Christian support, while the Muslim community didn't turn out to vote for them either.

"And, LDF won because it had the votes of both communities this time,” Kidwai added.