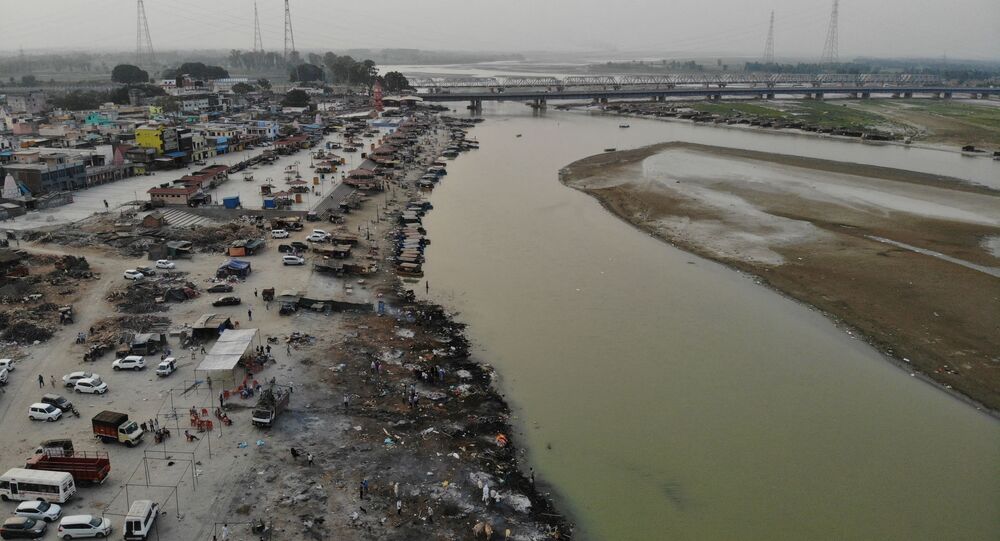 India has been struggling to cope with a rocketing number of COVID-19 cases during the second wave of coronavirus, and because of that Prime Minister Narendra Modi and his government have attracted blistering criticism for their alleged mishandling of the pandemic.

Officials in India's Uttar Pradesh state seemed to be in trouble after videos appeared of people cleaning the bamboo sticks and sheets placed over the corpses of those who have been buried in the sand by the side of the Ganges.

​Over the past month, hundreds of bodies have been found buried in the sand along the banks of the river Ganges across Uttar Pradesh. Most of these bodies were wrapped in clothes and could be identified by their accompanying bamboo sticks.

Speaking to Sputnik, an official in the Uttar Pradesh government said the state is planning to cremate the bodies which were buried in the sand but which have now surfaced, and they have started the process. "The bamboo sticks and clothes placed over the bodies have been removed to be donated to the poor. We are clearing the dirt left over the bodies by animals and will start cremating the corpses in the sand which have been uncovered or dragged away by stray dogs," the official added.

However, some locals claim the authorities are removing identifying marks to conceal exactly how many have died.

"People used to bury bodies around the holy river of Ganges. But in the past month, the number of such burials has shot up. However, because of media attention and strict action by the administration the state wants to reduce the number of bodies buried in this way," Vikram Mishra, a resident of Prayagraj told Sputnik.

However, despite the state's wishes, river bank burials have carried on unabated.

Speaking to the media, Prayagraj city's police superintendent said: "It is against the law to bury bodies near the Ganges. We have urged people not to do that and the local administration is helping them to cremate their loved ones."

Over the past month, state officials came under attack from the authorities after hundreds of bodies were found floating in the Ganges. The locals claim the authorities are turning a blind eye to the plight of the poor whose poverty is so great that they have no alternative but to bury their dead by the Ganged since they cannot afford the last rites for their loved ones lost during this pandemic.