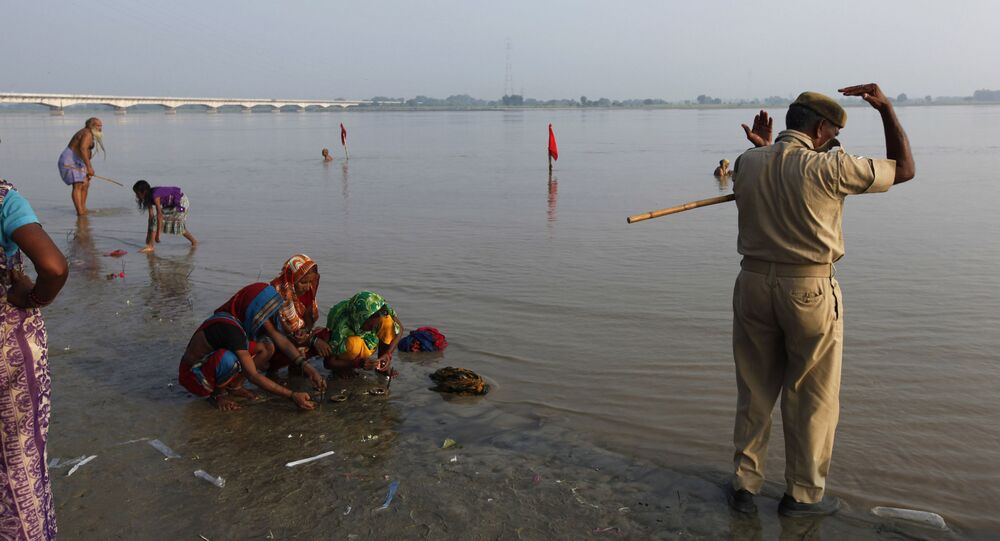 To contain the deadly second wave of COVID infections, India’s federal government has been emphasising vaccinating citizens as soon as possible. Starting 1 May, India’s vaccination drive opened up for everybody above the age of 18.

Over the weekend, a major incident unfolded in Sisaunda Village in the Indian state of Uttar Pradesh (UP) when nearly 200 people ran around the village and eventually jumped into the Sarayu River. The reason was that they did not want to get vaccinated with the "injection of poison" as they refer to the medication.

When the healthcare workers arrived in the village to inoculate the residents, they were asked to leave. Just as they tried to convince people to get inoculated, it created a situation of panic among residents of Sisasunda Village, who ran towards the Sarayu river to “prevent” themselves from the “poison injection”.

The village, located in the Ramnagar Block of the Barabanki District in Uttar Pradesh (UP), is home to around 1,700 people.

© REUTERS / ADNAN ABIDI
Rural India is Still Struggling to Get COVID Resources, Says Indian Medical Association President
“Most of these villagers are illiterate. They are adamant that they do not want to get vaccinated. After this incident, our officials are going from home-to-home educating people about the importance of vaccinations and clearing doubts. The situation will be better in the coming days," a police official from the Ramnagar police station told Sputnik on Monday.

"We cannot forcibly get people vaccinated, nor can we arrest them and put them behind bars for being scared of getting injected. So we are ramping up awareness initiatives,” the official added.

Health and police officials in UP villages are educating residents on the importance of COVID vaccines after around 200 people jumped into Sarayu river to evade vaccination.

Video sourced by @SputnikInt from locals of Ramnagar region. pic.twitter.com/S2SiiJxsHV

​In order to understand what has caused fear against vaccination in the region, Sputnik reached out the locals of Sisaunda Village. While noting that as of now there are no active cases in the village, Gulshan Kumar of the village revealed that people simply don't understand why everyone should be inoculated.

“They think, only people who have got infected with the virus must get vaccinated. It’s confusing for them to understand why others who remain untouched by the virus also need to get jabbed,” said 22-year-old Kumar, who hails from Sisasunda and works as an optician’s apprentice in Ramnagar.

The Sisaunda resident also added that in villages, news literally “travels faster than light” through word-of-mouth.

"People talk amongst themselves and when word-of-mouth spreads from one person to another, information easily gets converted into misinformation with added masala (spice or additional inputs). It is all this because of which the villagers have developed a fear against vaccination,” he added.

“If the police officials and health care workers visit people and convince them – the situation could change,” Kumar further noted.

People trying to run away from vaccination in UP's Sisaunda village. pic.twitter.com/NiVLEy1hkD

While around 200 people jumped into the Sarayu River in the village, several stood on the river banks threatening to jump into the water as healthcare workers reached the village to vaccinate people against COVID-19.

Rajiv Kumar Shukla, the Sub-Divisional Magistrate (SDM) of Ramnagar, had reached the spot to calm down these villagers and get them out of the water, the Indian media reported over the weekend.

After Shukla explained the importance of vaccination, 18 people in the village who had registered for slots using the CoWin app got the jab.

Meanwhile, Gushan Kumar, a native of Sisaunda village, has urged the government to also set up vaccination camps in remote villages for people aged between 18-44.

© REUTERS / DINUKA LIYANAWATTE
Outcry in India as People Under 44 Need to Register Online For COVID Jab
“Many people are aware about vaccination and are on board, but there is a lot of confusion and backwardness regarding online registrations for the vaccine that the government has mandated for people aged between 18-44."

"Like for people above 45 years, the government should allow younger people also to simply walk in for vaccinations without having to go through the online registration process. For now, some of us who understand the working of smartphones and internet are helping our community people with online registrations,” Gulshan Kumar said.

India saw an addition of over 222,000 fresh COVID infections taking the total tally to over 26.7 million In the last 24 hours; 4,454 Indians died due to COVID, taking the total number of deaths to 303,720 according to the federal Health Ministry.