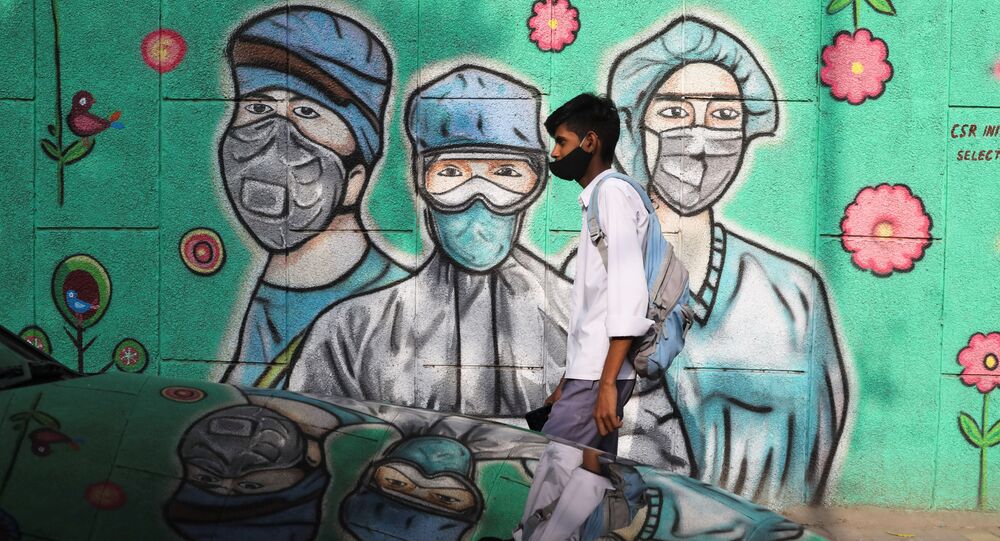 In April, over seven million Indians were let go. The unemployment rate jumped to 7.9 percent in April from 6.5 percent in March, according to a report released by the Centre for Monitoring the Indian Economy (CMIE). Real estate, the gem and jewellery industry, and other sectors have been affected by the pandemic.

Prem Khampariya, a 34-year-old man from Khawasa, a village in Madhya Pradesh in central India, was working as a mason in a small construction firm in Nagpur city. However, in mid-April, the second wave of COVID hit the city and within days, the markets and construction sites were shut down. Hundreds of skilled labourers like Khampariya lost their jobs overnight.

India’s real estate sector, for instance, is expected to be worth $1 trillion by 2030 and by 2025, the sector is estimated to contribute an impressive 13 percent to the country’s annual national income. However, the coronavirus has left thousands of workers involved in the sector and related industries jobless. Workers at construction sites, special machinery operations, crushers, cement factories, paint companies and others – have all been asked to take a break. For most of them, this unwelcome hiatus from work is unpaid.

Arpit Mishra, a real estate dealer from Madhya Pradesh tells Sputnik that the sector has been completely swept away by the second wave of COVID in India right now. Mishra reveals that home prices in India will barely rise this year, an observation also made by Reuters. According to its survey of nearly 20 property market experts, home prices nationwide are forecast to rise just 1.3 percent this year.

“Under these unprecedented circumstances, the biggest challenge is to stay afloat in the market until this virus storm passes by. Because our revenue streams were blocked due to city lockdowns and social distancing norms, we had no option but to size down our workforce. Some workers, who are still helping us with menial jobs, are all from the city. The others from smaller towns and villages nearby went back home,” Mishra says, while noting that once the COVID situation stabilises, his company will take back all its workers for as much pay as the company can afford.

The wives of these workers, who are often maids, also lost their jobs as people haven't been letting others inside their homes due to the virus.

“It has been difficult for us to survive in the city with a combined monthly income of less than $200,” Rameshwar Verma, a migrant worker, says.

© REUTERS / DINUKA LIYANAWATTE
PM Modi Vouches Bolstering Vaccine Supplies As Gov't Critics Face Unprecedented Crackdown in Delhi
Analysts believe that had the Narendra Modi government prioritised mass vaccinations starting in February or March, the second wave would not have been so devastating.

“Sectors like construction, gems and jewellery are high employment-generating industries. Because these sectors have either been totally or mostly shut down, many job losses have happened. India should have focused on mass vaccination from the beginning of the year, rather than exporting so many doses abroad,” Akash Jindal, an economic commentator, tells Sputnik.

Meanwhile, those who work in the gems and jewellery sector are now concerned that China, one of the country's main rivals in the industry, will take advantage of the health crisis in India and boost its position in the market.

Between April and March, India’s diamond hub Gujarat witnessed conflicting government orders regarding lockdowns for the gems and jewellery industry, which caused much confusion, Chintan Gujarati, who hails from a diamond trading family, tells Sputnik. At one point, the state government allowed diamond manufacturing, but halted trading. Industry workers fled to their home towns, fearing lockdowns in big cities.

“The workers kept opposing the idea of dragging the industry under a lockdown. On a professional front, they were scared that China would take over the market and on the personal note they expressed concerns on having to go through hungry days if the sector pulled its shutters down. But the virus effect was devastating. Surviving over earning was the priority. Everybody eased out on the business and workers were allowed to go home. We had no income to pay them salaries", Gujarati says.

In a bid to bolster the industry after the spread of coronavirus slows down, Gujarati suggests the government should consider easing export duties for eight to ten months, before China outstrips its neighbour.

Since over 7 million jobs were lost between March and April this year and online marketplaces were focusing on delivering essential products, manufacturing sales, including tech and auto, also dropped.

“There has been a huge dip in the purchase of mobile phones and automobiles, which hold a major stake in the semiconductor market of India. This has also led to a ripple effect, showing decline in other intermediate products like paints. China, being a key exporter of paints and coatings, has made the situation worse. Most areas of the countries remain temporarily closed, creating a huge deficit of demand and supply in all these sectors combined," Kunal Thusu from one of India's largest chemical manufacturing firms, Gujarat Fluorochemicals Limited (GFL), told Sputnik.

While noting that the pharma sector of the country is doing well, Thusu revealed that production in the chemical sector has also declined by almost 2.4 percent as compared to last year.

“Almost all manufacturing sectors are hit. There is a disrupted supply chain, reduced demand, and a labour shortage, which is expected to hit Indian economy and show the actual disruption when the COVID dust settles. Other manufacturing industries like cosmetics, foods and beverages have also shown a decline in their production. The major reason being the offline stores have now been closed and the online market is the only source for purchases,” Thusu said.

Crux of the Unemployment Crisis in India

The country's unemployment woes are perhaps the worst side-effect of the pandemic. The reverse exodus of migrant labourers in India has left industries in dire need of manpower.

Amid vaccine shortages, a peak number of COVID cases, and new epidemics like Black Fungus and White Fungus, India's internal migrant workers are hesitant to return to the cities. The death toll from coronavirus includes many such workers, while others have been killed during the perilous trip to their far-flung rural communities, industry experts agree.

What Can India Do Next

Akash Jindal told Sputnik that on 28 May, central and state authorities are slated to gather for a “crucial” Goods and Services Tax (GST) council meeting. They will decide the rates and future plans for GST taxes.

“It’s recommendable that GST should be waived for all COVID-related equipment like oximeters, ventilators etc. Also, GST should be reduced for labour intensive sectors. If we reduce GST on those industries, the prices of things would go down, more demand would be generated and more industrial jobs will open up, and India's employment status would improve exponentially,” Jindal said.