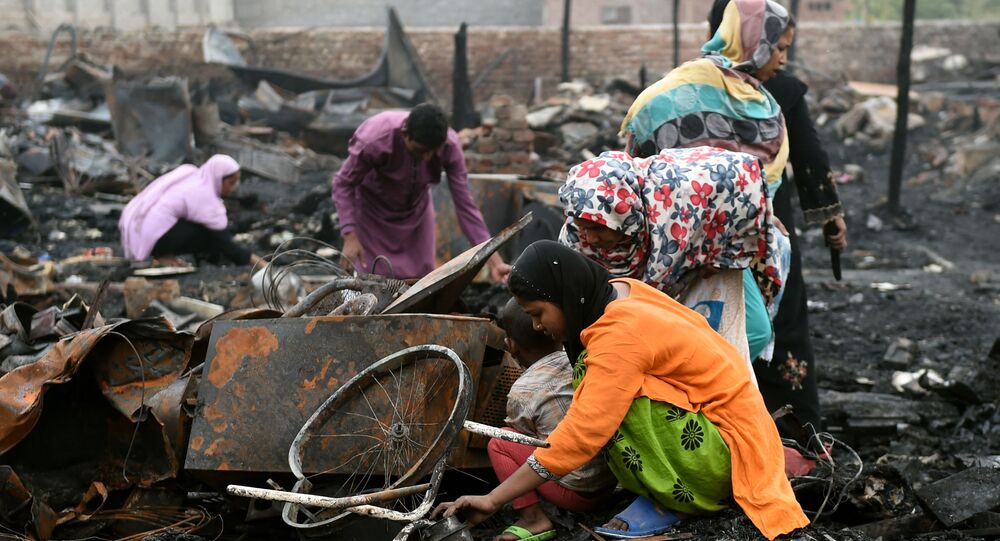 The Indian state of Mizoram shares a border with Myanmar, where the military coup on 1 February has displaced thousands, many of whom are fleeing to India.

Despite the Indian federal government's cautious approach to Myanmar in the wake of its military coup, the state government of Mizoram has been providing shelter to people fleeing the country since late February. The army seized power from Myanmar's civilian leader Aung San Suu Kyi on 1 February,  alleging “fraud” in the last election.

Sputnik spoke to C Lalramzauva, adviser to the state chief Zoramthanga, who has been at the forefront of a series of initiatives to help the refugees.

Sputnik: How many people from Myanmar have crossed into the Indian state of Mizoram since the military coup on 1 February, 2021?

C Lalramzauva: I have verified from the officials in the state and I can tell you that the number of people crossing over to Mizoram is increasing by the day. About 20,000 people from Myanmar have come to Mizoram since the border of India with Myanmar is very porous. On 11 May, we had recorded about 15,468 refugees but the numbers have increased in the past 10 days and easily crossed 20,000. The highest numbers, over 6,000, are in the state capital Aizawl city, and another 2,500+ people in Hnahthial district.

© REUTERS / Stringer
Protest against the military coup, in Mandalay

Sputnik: Given the pandemic, are refugees coming from Myanmar fueling the spread of the virus?

C Lalramzauva: Many of those coming from Mizoram have been found to have contracted the coronavirus. Some have fallen sick and the treatment is being given by the government in COVID care centres. Some have recovered and many are still recuperating. If they are found to be infected, then necessarily they have to be isolated and given treatment by the state government. As of now COVID positive cases, the active ones, are not very high in Mizoram as compared to other states, and the fatalities stand at 29. The population itself is very low in Mizoram, less than 1.5 million.

Sputnik: People in Mizoram and the state government are very sympathetic to the people of Myanmar who are crossing over. Why?

C Lalramzauva: The people of that area of Myanmar, the Chin state that borders with Mizoram, are ethnically related to people of Mizoram. It's very difficult for the people of the bordering area to say no to those people who are fleeing for their lives.

Sputnik: Who is looking after all of these people?

C Lalramzauva: Now they are under the care of the non-government organisations in the state of Mizoram who are actively looking after their needs and making provisions. Mainly the Young Mizo Association is looking after them and some others like women associations, senior citizen associations, and even some child associations are there. It's not possible to single-handedly manage all the problems of such a vast number of people.

Sputnik: What kind of help is the state government giving to the refugees?

C Lalramzauva: The government is not directly giving any aid to the refugees. It is a federal subject, and the Indian federal government has not done anything for their provision. That is why the local NGOs are stepping in.

Sputnik: Mizoram's head Zoramthanga made an appeal to the federal Home Minister Amit Shah to be sympathetic to the Myanmar refugees. Has there been any response from the federal government, and does it share the state government's point of view on the subject?

C Lalramzauva: Mizoram's chief secretary wrote a letter to the federal government. In that letter, the information was given about people entering India from Myanmar. At that point, their number stood at about 6,000, but it has since increased. The federal government has given no help and no financial assistance so far.

Zoramthanga also wrote a letter to Prime Minister Narendra Modi saying that Myanmar areas bordering Mizoram are inhabited by Chin communities who are ethnically our Mizo brethren with whom we have had close contact even before independence. Therefore, Mizoram cannot remain indifferent to their suffering.