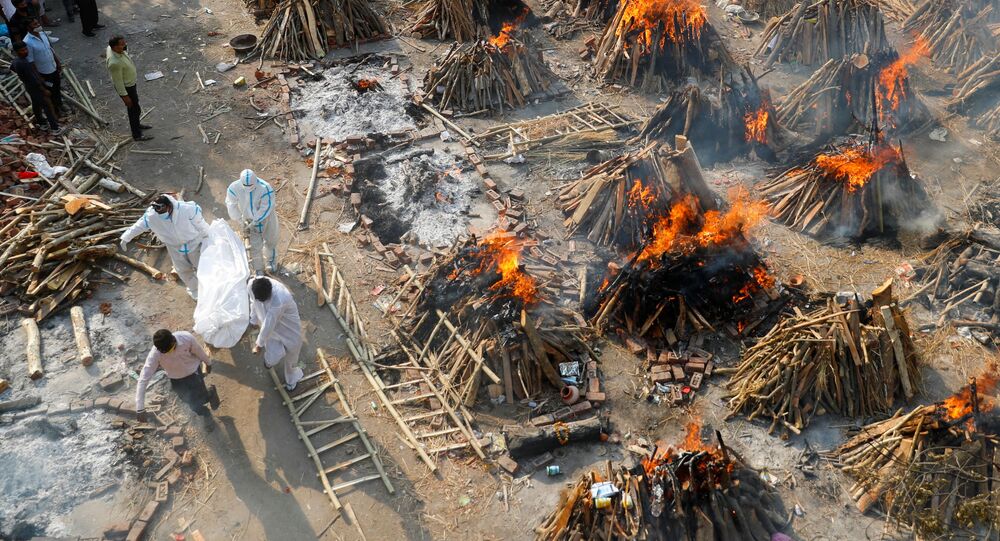 The second COVID wave in India, which started to peak in mid-April, has led to the nation becoming the second-worst COVID-hit country in the world, with only the US faring worse in terms of the number of cases. So far, more than 25.7 million people have been infected with COVID in the country, with more than 287,000 also succumbing to the virus.

An analysis of six "birth-death" mathematical models by an Indian academic has predicted that the devastating second COVID surge in the South Asian country will start to decline in early June.

Professor Narayanan Viswanath, an associate professor at the Government Engineering College in Kerala’s Thrissur city, told Sputnik that the mathematical model devised by him pointed towards “lower infectivity rates” in the country after 4 June, which would translate into a lower number of cases.

Overall, the Indian mathematician premises his predictions on six birth-death models, with the first five covering two-week spans between 13 February and 14 May. The sixth model covers the entire period.

“The infectivity rates are found to be ever-increasing in the case of the five initial models. The infectivity rate for the sixth model, which is based on the data from 13 February to 14 May 2021, shows a decreasing nature with an increase in time. This indicates a decline in the second wave, which may start from 4 June 2021 according to the fitted parameters”, estimates Viswanath.

The infection rate measures how rapidly a disease spreads among a given population. Another crucial parameter is the reproduction number (RO), which measures the number of people infected by every individual.

“The RO in India has been more than one during the second wave. However, this is starting to come down now”, he says.

Viswanath observes that 13 February is now widely accepted as the starting date of the second COVID surge in the country. India recorded more than 200,000 new infections on a daily basis for almost three weeks starting 15 April. It recorded more than 300,000 new infections for the first time on 21 April, the highest anywhere globally since the onset of the pandemic last year.

The COVID-battered nation shattered all previous records by reporting more than 400,000 new cases on 1 May. The highest daily caseload was recorded on 7 May, with 414,188 new infections, which is recognised as the "peak".

Viswanath’s findings have been published in the US-headquartered medRxiv journal, published by Cold Spring Harbour Laboratory, and are yet to be peer-reviewed.