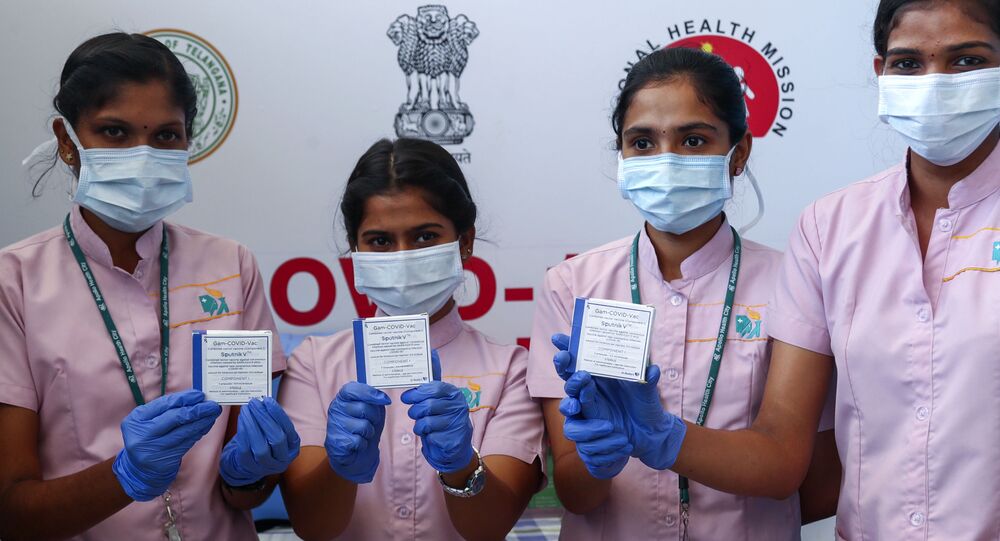 With an efficacy of 91.6%, as published in The Lancet, the Russian Direct Investment Fund has signed a deal to produce 750 million doses of Sputnik V in India. Sputnik V was given emergency use authorisation by the Drugs Controller General of India in April and was first approved in Russia last year.

Amid reports that several medium- and small-sized hospitals in India might start administering doses of the Russian-made COVID vaccine, Sputnik V, starting next month, many Indians have put their vaccination plans on hold.

"I want to get inoculated with Sputnik V. That is why I have not registered for the Covishield vaccine, which is the only one available here in government hospitals", says Rohit Sharma, an entrepreneur in the Union Territory of Chandigarh.

"I know it might take time reaching here but I am willing to take the risk of waiting for it. Until I get the jab, I plan to stay at home", he adds.

The Indian government is inoculating its population free of charge in government hospitals, with two vaccines, the Oxford-AstraZeneca Covishield produced by the Serum Institute of India and the domestically-developed Covaxin.

Many, however, are willing to shell out money to pay for Sputnik V instead of opting for the free jabs being given in government hospitals. The Hyderabad-based Dr Reddy's, the company ensuring Sputnik V's availability in India, said the cost of the vaccine is around $14 per dose.

"For the past 10 days we have been flooded with queries regarding the availability or the expected time when Sputnik V will be available in the market here. People are waiting for the vaccine to get themselves inoculated and want to know if they can book their doses in advance", says Mukesh Anand, owner of a pharmacy outlet in Chandigarh.

Private hospitals in several Indian states and cities are expecting their stocks of the Sputnik V vaccine by 15 June as they prepare to procure vaccines through their lobby group - the Association of Healthcare Providers of India (AHPI), an association that represents 2,500 super speciality and 8,000 smaller hospitals.

AHPI Director General Girdhar J. Gyani told the media that "we have been informed that the supply of Sputnik V will begin from 15 June. In the first tranche, we have demanded 1.5 million doses which will be distributed to hospitals in Mumbai, Chennai, Delhi, Kolkata, Bengaluru, Ahmedabad, Hyderabad, Pune, Jaipur, and Kochi".

A second batch of #SputnikV has landed in Hyderabad today!
We are very happy to see that the #RussiaIndia joint fight against #COVID19, which is one of the vital areas of our bilateral cooperation nowadays, has firmly stood on rails & moving forward. pic.twitter.com/DxgfMmqHmh

"I heard that Sputnik V might even become part of the national vaccination programme after July when the manufacturing of adequate doses begins in India. I hope that happens. I will not get myself jabbed with any other vaccine", says Sunil Kakkar, a teacher in New Delhi.

Last week, Delhi Chief Arvind Kejriwal said his government had written to Dr Reddy's wondering when the Russian vaccine will be availaibe in the Indian capital.

@msisodia @ArvindKejriwal when will Sputnik V be available in Delhi?

Govt. needs to contact @sputnikvaccine ..for sputnik light vaccine so that country gets vaccine available as early as possible. Pls allow it privately. So that people whu can afford.

India has so far given out more than 180 million doses of two approved vaccines - Covishield and Covaxin. The country aims to vaccinate 250 million "priority people" by the end of July. The severity of infections and the lack of supplies have slowed down the vaccination drive in India since May. To expedite the vaccination process, Indian states like Maharashtra, Uttarakhand, Kerala, and Chhattisgarh have decided to float global tenders to procure coronavirus vaccines amid a shortage of supplies from domestic manufacturers.