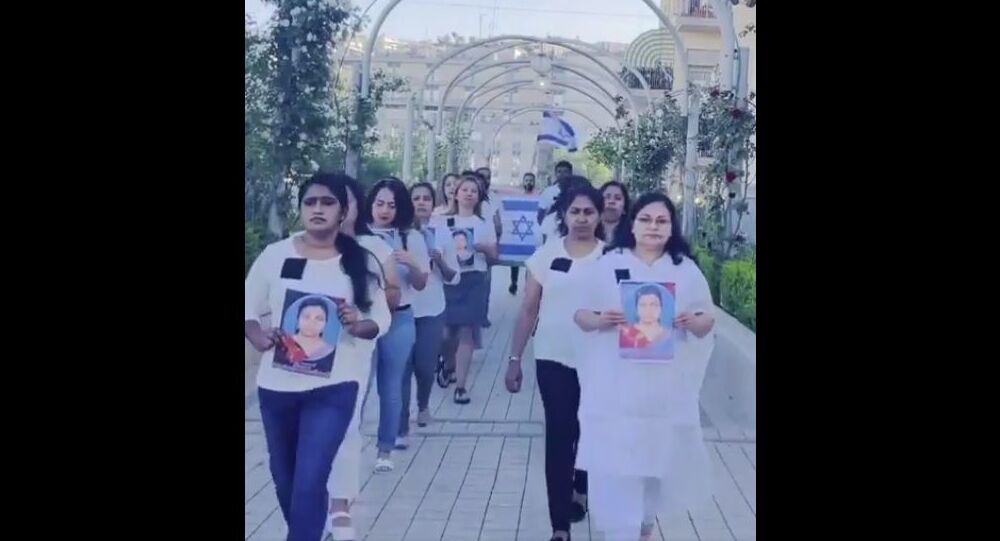 The 30-year-old woman from the Indian state of Kerala, worked as a care worker who was looking after an elderly woman in the southern Israeli city of Ashkelon.

Members of the Indian community in Israel held a candle-lit vigil in memory of an Indian woman, Soumya Santosh, who was killed in a Hamas rocket attack in the Israeli city of Ashkelon last week.

An expression of solidarity!
The 🇮🇳 nationals living in 🇮🇱 held a candle march in memory of Ms. Somya Santosh, who was killed in a horrific airstrike by #HamasTerrorist. Indians and Israelis share this grief🇮🇱🇮🇳.
May her memory be a blessing 🙏pic.twitter.com/vR4iIvnEUy

​The video has attracted many emotional reactions from Indians, who have sent their condolences to the Israeli and Palestinian families who have lost family because of the violence.

Santosh had lived in Israel for the past seven years, working as a care worker looking after an elderly woman. She was talking to her husband in India on video call on the evening of 11 May when a rocket fired from the Gaza Strip fell on the terrace of her building and killed her.

She is survived by her nine-year-old son who is with his father in India's southern state of Kerala.

On 19 May, Israeli President Reuven Rivlin spoke to Santosh’s family in India and sent his condolences.

Her remains were sent to India on 14 May in a specially arranged flight from Israel which reached her hometown, Idukki, on 15 May.

Tensions on the Israeli border with the Hamas-controlled Gaza Strip started to escalate nearly two weeks ago. Fighting was prompted by the planned eviction of Palestinian families from Sheikh Jarrah, a predominantly Palestinian neighbourhood in East Jerusalem, and the decision by Israeli authorities to restrict access to the al-Aqsa mosque - one of Islam's holiest sites - and has led to the worst violence between Israel and Palestinians in years.

As of today, more than 4,000 rockets have been launched against Israel from the Strip, and Tel Aviv has responded with strikes on Hamas targets in the Palestinian enclave. According to the latest data, there have been 12 deaths on the Israeli side with more than 50 people seriously wounded, and 227 deaths - including 64 children - on the Palestinian side.