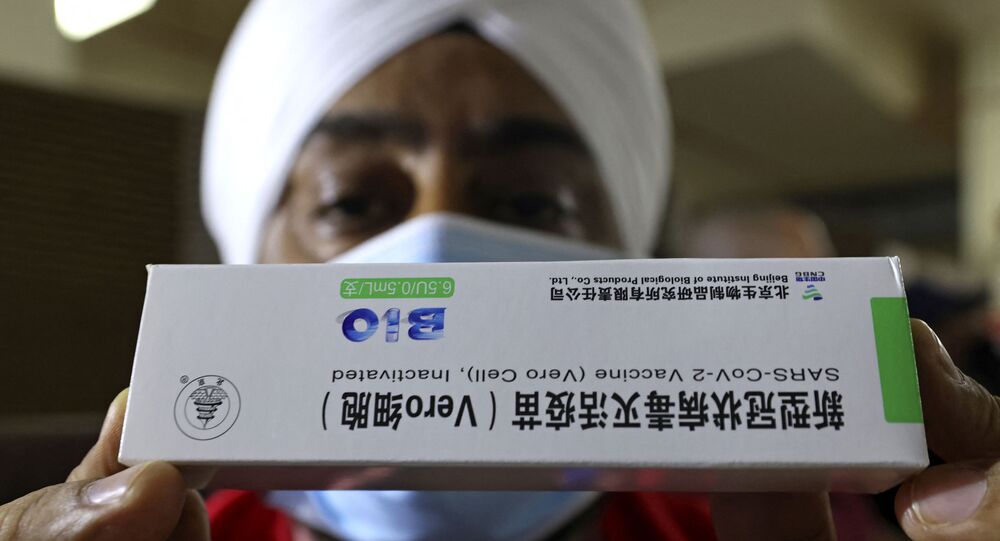 China’s state-backed Sinopharm vaccine was approved for emergency use for a global rollout by the World Health Organisation (WHO) on 7 May, making it the fifth vaccine to be validated by the global health outfit. The WHO has, however, stated that it has “low confidence” about the risk of side effects of the jab in older patients.

India's federal regulator the Central Drugs Standard Control Organisation (CDSCO) has expressed reservations about the efficacy of China's Sinopharm vaccine, as several state governments in the COVID-battered South Asian country have begun floating global tenders to procure jabs directly from foreign manufacturers to tide over the ongoing crunch in the nation.

"Any vaccine listed in the WHO Emergency Use Listing (EUL) can enter the Indian market, provided it undergoes parallel bridging clinical trial", a CDSCO official told Sputnik, adding that even the vaccines procured by states through global tenders will have to be approved by the drug regulator before being rolled out to the masses.

“The global tenders that individual states are floating are not our concern. But the state governments must keep in mind that whichever vaccine they select must be approved by us”, added the official.

He informed that as part of the approval process, any new vaccine will first have to be tested on a group of 100 people and the safety outcomes studied properly before a mass rollout.

India has so far approved three vaccines for emergency use authorisation (EUA)—AstraZeneca and Oxford University’s Covishield, Bharat Biotech’s Covaxin, and Russia's Sputnik V, which was developed by the Moscow-headquartered Gamaleya Research Institute of Epidemiology and Microbiology.

The official observed that besides WHO experts raising doubts over the efficacy of the Sinopharm vaccine, there was “emerging evidence” that takers of the Beijing-backed jab may require a third dose beyond the conventional two doses.

Developed by Beijing Bio-Institute of Biological Products Co Ltd, a subsidiary of China National Biotec Group (CNBG), the Sinopharm COVID-19 vaccine was approved by the World Health Organisation (WHO) for emergency use on 7 May.

The WHO’s Strategic Advisory Group of Experts on Immunisation (SAGE) at the time estimated its efficacy to be nearly 79 percent. The “evidence assessment” document prepared by SAGE expressed “confidence” in two doses of Sinopharm vaccine preventing COVID-19 in adults, but raised questions on the data provided by the Chinese company when it came to gauging the side effects in older patients.

Besides WHO’s observations, the United Arab Emirates' (UAE) government, one of the biggest foreign users of the Chinese vaccine, is reportedly mulling a third dose of Sinopharm for people who have already been administered two doses in view of the low level of antibodies generated.

Before its validation by the WHO, the Chinese vaccine had already been approved for emergency use in 45 countries, with over 65 million doses administered globally.

At a virtual meeting of foreign ministers from South Asian countries last month, Chinese State Counsellor and Foreign Minister Wang Yi said that Beijing was ready to offer the Sinopharm jabs to New Delhi in the coming days. The foreign ministers’ meeting wasn’t attended by India.

The South Asian country has been facing a severe vaccine crunch amid an exponential surge in COVID infections since last month.

The vaccination guidelines mandate that states procure 50 percent of their vaccine requirements on the open market, with the federal authorities required to shoulder the other half.

While the tender issued by Maharashtra state’s civic agency the Brihanmumbai Municipal Corporation (BMC) explicitly bars companies from countries sharing a land border with India (including China) from the vaccine procurement process, the one issued by Tamil Nadu has no such clause.

However, even the tender issued by the BMC, which is inviting submissions until 25 May, doesn’t categorically bar foreign companies making Sinopharm in third countries not sharing a border with India.