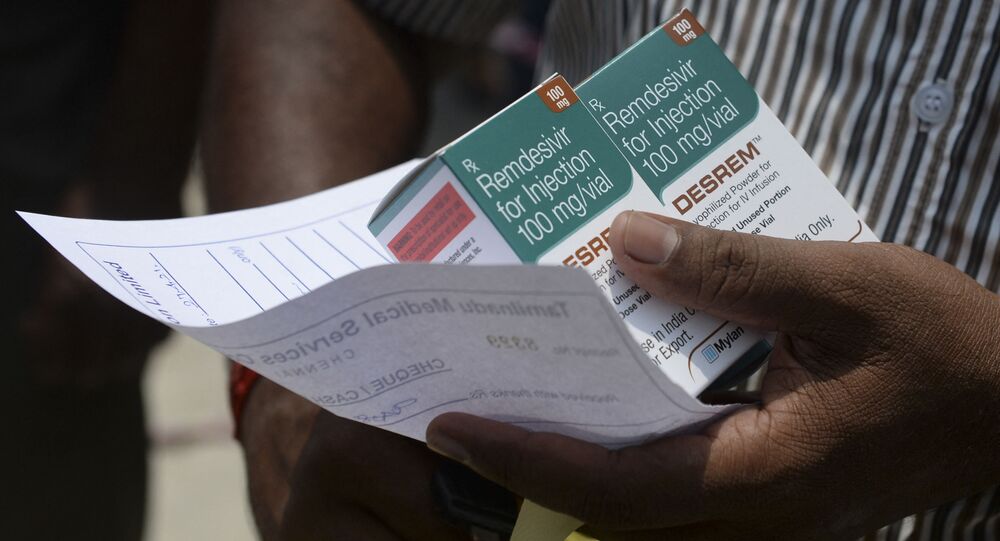 Just as India's drug manufacturers and pharma businesses are catching up with demands for anti-viral drug Remdesivir, plans are afoot to remove the drug from the list of things with which COVID-19 may be treated. Remdesivir's inadequacy in halting the transmission of coronavirus is the reason given for its removal.

The demand for Remdesivir has rocketed in the country among COVID-19 patients and there have been several stories of the drug being touted on the black market. But recently, the head of the All India Institute of Medical Sciences, Dr Randeep Guleria, said that the anti-viral drug is not a magic bullet against infections.

Indian pharmaceutical businesses have expressed concerns as Remdesivir, an anti-viral medication, may be dropped from India's COVID-19 treatment. Speculation is particularly rife since Dr DS Rana, the chairman of Delhi's Ganga Ram hospital, said on Tuesday that there is no evidence of its efficacy in treating COVID-19 patients. He added that medicines that do not have any effect will have to be discontinued.

"Approximately 10 new manufacturing facilities have now opened, resulting in a 20 percent increase in output. Since the previous wave of the pandemic, manufacturers have doubled the output of Remdesivir. Because of the exceptional demand for medicine, they increased production,” Dr Gurpreet Sandhu, President, Council for Healthcare and Pharma, explained to Sputnik.

The manufacturing capacity of the seven licensed domestic producers has been expanded to around 12 million vials from 3.8 million each month as the Indian government approved 38 additional manufacturing sites in an attempt to meet the tremendous demand since April this year.

“With more than seven pharmaceutical companies, including Sun Pharma, Cipla, and others investing millions to increase production of Remdesivir, dropping the drug would cause huge losses for the manufacturers and pharma industry," Sandhu said.

The President also said that dropping Remdesivir may create initial panic among people until they understand that it's necessary for saving costs and investing in new and better medicines.

In November last year, the World Health Organization (WHO) issued conditional recommendation that Remdesivir should not be used on patients in hospital, regardless of how severe the disease is, as there is no evidence that Remdesivir improves survival.

After pharmaceutical company Gilead criticised the WHO's solitary trial on Remdesivir and some other drugs, saying the findings appeared at odds with other studies, the agency hired epidemiologist Richard Peto to evaluate the results.

“According to Gilead, the findings appear inconsistent with other studies published in reviewed journals confirming the clinical and recovery benefits of Remdesivir. So, whether Remdesivir will be dropped or not has yet to be seen. And even if it is, there are many clinical trials in the works for new drugs and vaccines to combat COVID-19. The future is bright, and we should be optimistic," Dr Sandhu said.

However, some doctors who used the anti-viral medicine to treat patients with COVID-19 support the use of Remdesivir.

Dr Kiran Khushal Patil, a critical care consultant at S L Raheja-Fortis Hospital in Khar, Mumbai, told Sputnik: "The treatment of critically ill COVID-19 patients depends entirely on when certain treatments are administered including Remdesivir. According to my experience, the medication has shown good results and proved to be a game-changer. If it is dropped from the list of treatments, we will lose on an effective medicine used in preventing complications of COVID-19. It's an effective medicine. Loss of Remdesivir would have an acute effect on humanity. Pharma companies will also face the brunt."

Last year, Remdesivir was approved for restricted emergency use in India to treat COVID-19 patients. It can only be sold with a prescription, in the form of an injection, and only hospitals and chemists are allowed to stock it.

"Even after the trial data results, there was and still is an enormous push to use this drug with prices rocketing and companies raising production after the government intervened to fast-track approvals to new makers so they could scale up production to almost a million vials per month. However, if this drug is dropped, big pharma will take a big hit as they have thrown everything at importing, marketing, and manufacturing this drug at a frantic pace," Dr Sanjith Saseedharan, the chief intensivist at SL Raheja Hospital's Department of Critical Care in Mumbai's district of Mahim, told Sputnik.

"Patients would feel the loss of a drug which could possibly save them and this would depress them emotionally whereas if the pharma industry were to get rid of their stocks prices would fall to rock bottom. However, this would take a while to sink in to the minds of doctors involved in care as they have been using it as a panacea and would be unable to pull out of it immediately," Dr Saseedharan underlined.

Meanwhile, Cipla, one of India's oldest drug makers, recently said that they are boosting the production of the drugs to meet the overwhelming demands in the country. According to reports, Cipla's production of Remdesivir is five times higher than the monthly output of 200,000 to 300,000 vials during the last wave of the pandemic in 2020.