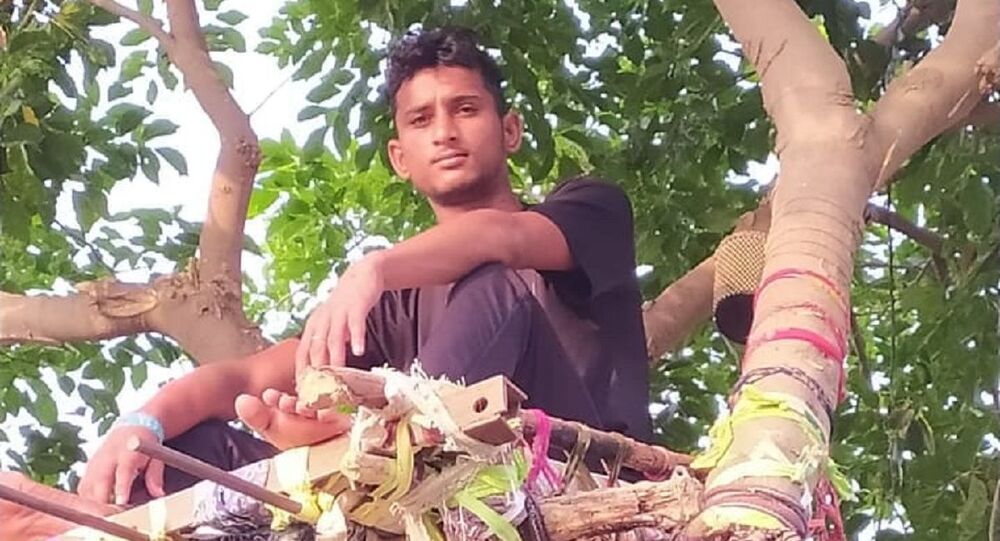 COVID is wreaking havoc in India's remote settlements, where access to healthcare is limited, forcing people to resort to unorthodox anti-virus methods.

An 18-year-old man built a bed in a tree so he could isolate after testing positive for COVID in Kothanandikonda, a remote tribal hamlet in the Nalgonda district of India's Telangana state.

Ramavath Shiva tested positive for coronavirus on May 4 and was suffering from mild symptoms. A primary health care (PHC) worker advised him to isolate at home as a result, but because he lives in a single-room house with only one washroom, Shiva decided to build an isolation bed made of bamboo in a tree near his home.

“After advice from the PHC worker to be under home isolation, I feared that if I isolate myself in the house, my family members might also get infected by the virus, therefore, I decided to build an isolation bed on a tree in front of my home,” Shiva told Sputnik.

© Photo : Ramavath Shiva
Ramavath Shiva built a bed in a tree so he could isolate after testing positive for COVID in Kothanandikonda, a remote tribal hamlet in the Nalgonda district of India's Telangana state

His family provided him with meals, medicine, water, and other essential items via a bucket tied to a rope.

Shiva said the PHC worker prescribed him medicine which he took during the isolation period. "Apart from this, the people in the villages are so much in fear that they didn't come forward to help. The families living here are rarely stepping out of their homes," he added.

People living in remote tribal hamlets often have to travel up to 30 km to reach the nearest hospitals, but PHC centres are more convenient; the nearest is 8 km away from Kothandikonda, where almost 350 families live.

© Photo : Ramavath Shiva
His family provided Ramavath Shiva with meals, medicine, water, and other essential items via a bucket tied to a rope

Shiva remained under isolation in the tree for 10 days until he tested negative on Tuesday. He said his mobile phone helped him during that period because he was able to keep in touch with his friends and family.

Shiva told Sputnik that he's really happy to be back with his family again, especially as no relatives were infected.

As per the reports, the Nalgonda district is among the worst-affected in Telangana, where so far 532,784 cases have been reported of which 49,341 are active. So far, around 2,980 virus-related deaths have been reported. In the last 24 hours, the state registered 3,961 cases and 30 deaths.