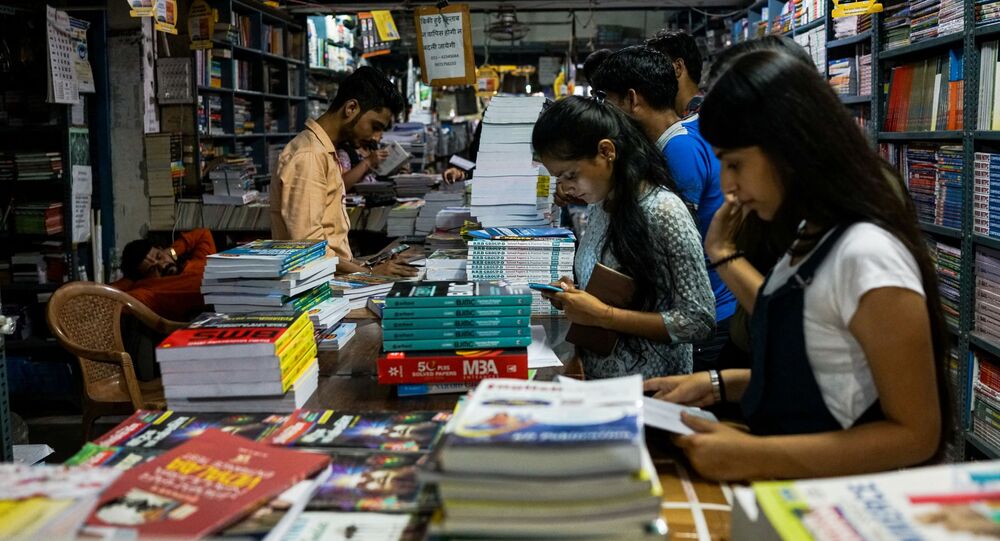 The second wave of COVID-19 has strangled India's education sector, with schools closed and exams cancelled.

India's COVID crisis has devastated the country's education sector from top to bottom; schools have now been closed for over a year, with many exams postponed until further notice.

“However, due to the efforts of our teachers and quick adaptability of our students, the country witnessed a greater acceptance of online education during the pandemic times. To ensure continuous quality education for our students the ministry has taken up various initiatives to ensure that all the students across the country have access to quality education,” the minister emphasised.

The government and private institutions claim that everything has been done to keep education in India moving but the pandemic has been too overwhelming. Parents are demanding school fees be wavered as unemployment and salary cuts soar.

Talking about the challenges faced by schools, Dr. Sunita Gandhi, who runs City Montessori School (Lucknow), told Sputnik: “They were rather operational constraints that made most of the educational institutions uncomfortable in the beginning of the sweeping pandemic. While many of them were quick to adopt the online teaching model, some were reluctant of being far too dependent on technology than they should have.”

However, she believes COVID has been a valuable learning experience for education leaders, schools, teachers, and students.

“The COVID-19 pandemic saw an unprecedented shift in the education sector. With digital learning, students have become more tech-savvy; an essential skill for the digital economy. However, new-age learning also comes with its fair share of challenges. The socio-economic disparity is an obstacle to children from economically disadvantaged families who lack access to devices like laptops, tablets, mobile phones, or internet connectivity,” Prajodh Rajan, co-founder and CEO of EuroKids International, said.

Aboli Ruikar, director of a pre-school in Pune, said: “The pre-schools suffered the most as a lot of parents believe that there is no need for online teaching for children of such a small age group. In such a scenario, a lot of pre-schools failed to sustain during the pandemic. This will bring a huge learning gap as children learn a lot in pre-schools and develop a habit of following a routine.”

Around 55 percent of pre-schools in the country have shut down over the past year following an 80 percent decline in admission due to various factors. As far as primary education is concerned, ASER's (Annual Status of Education Report) annual survey revealed that the dropout rate of children aged 6-10 reached 5.3 percent in 2020, up from 1.8 percent in 2018, while the dropout rate of children aged up to 16 has hit 5.5 percent from 4 percent.

Parents have struggled during the crisis; salary cuts and lay offs have risen making it harder to pay for school fees. Amit Pandey, whose son is in second grade, told Sputnik: “I lost my job during the COVID times due to which I was not able to pay the school fee for about two months. I totally agree that schools can’t be operated without the fee so I had decided to take out my ward from the school for the time being. After getting another job at the start of this year, I got his admission done in a school where the fee was less. I faced such a crisis for the first time and was really disappointed for compromising with my child’s education.”

Ramesh Raja, who has a daughter in sixth grade, said “I was forced to withdraw her from school and admit her into another cheaper school with fewer facilities as I suffered a pay cut in my job and it was hard to manage."

However, some companies have contributed to their employees' school fees to help out. “Covid forced a lot of schools to shut and resort to online learning. With the reduced inflow of funds, the schools have also not been able to sustain and pay the salaries to the staff. Not every school across the country has enough infrastructure or capabilities to pursue online education which is resulting in increasing the gap. Dropouts have indeed increased, not just due to increasing cost of education but also due to unavailability of alternatives to offline education in many parts of the country,” Rohit Gajbhiye, CEO and founder of Financepeer, told Sputnik.

“Fee Financing has proven to be a key enabler for the education industry that has facilitated both the end of ecosystems i.e. schools and parents to have funds available to sustain. We have seen a surge in the demand for fee financing and have reached over 1 million students and parents in the last 12 months,” he added.

Narottam Parida, a parent who benefitted from his company contributing to school fees, told Sputnik: “I had to support my son's education as it was a crucial year for him. I had even tried for an education loan but the banks didn’t help. They kept sending me from one window to another. The fee financing model was the easiest and hassle-free way to take a loan that too on zero interest. I feel that awareness about such a model should be there so that a lot of parents who are in need of easy finance can be benefited from it.”

Experts and India's Education Ministry believe that the education sector will evolve into a hybrid model.

“There will be an exemplary shift in all sectors, education being a part. The classroom processes will change. There will now be a focus on digital learning, blended learning will be the new normal. However, MHRD will be vigilant on the principles of access and equity, thus strategies will be devised to reach all the students,” Indian Education Minister Nishank said.

Sunita Gandhi said, “I’m a great advocate of community action service that should require every child graduating their high school to have a social service track record. In my opinion that can happen if a student becomes a teacher and takes responsibility to help an illiterate fellow read literature, write, and calculate basic mathematics. We are a nation with the biggest illiterate population, so, a literate person passing on his knowledge to an illiterate could help reduce the gap.”

ASER also revealed that despite the move to online education, only one third of India’s school children are actually studying online. Apart from this, only 11 percent of all students enrolled in both private and government schools are using online classes, 21.5 percent are using videos or recorded classes, and only 8 percent of government school students were using online classes across the country.