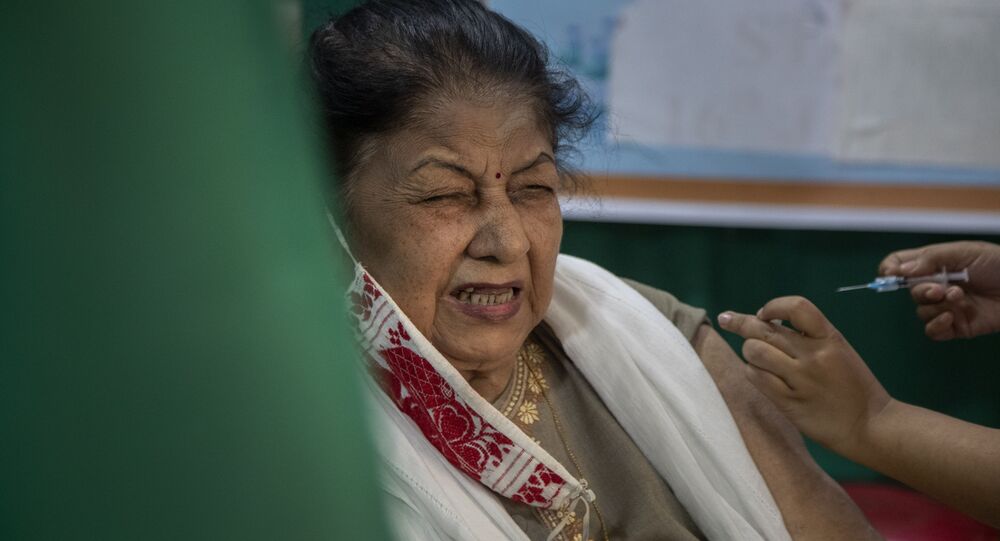 Production Delays, Lack of Trust: Experts Say it May Take 9 Years to Vaccinate All of India

In January, India started its national vaccination programme to contain the spread of COVID-19 disease. The government initially prioritised health and frontline workers, while all adults will be offered the jab from 1 May.

With India kicking off its vaccination drive in January, more than 135 million people have so far been inoculated across the country. However, some medical experts are concerned about the pace, claiming that if things don't speed up it will take nine years to vaccinate 70 percent of the population and achieve herd immunity.

Speaking to Sputnik, Dr. Bipin Jibhkate, ICU director at Wockhardt Hospital, said that in the past 50 days around 97 million Indians have been vaccinated, with approximately 15 million taking the second dose.

"It's determined that at this pace our country will take at least nine years to vaccinate each and every individual and more than 12 years will be required to administer the second dose to the entire population of the country,” he said.

“Herd immunity will take more than eight years to be achieved. Vaccinating about 70 percent of people will help acquire herd immunity," Jibhkate added.

He stated that to increase the pace, more effort should be made to raise vax awareness among India's rural communities.

After much debate and delay, India will offer the COVID jab to all adults from 1 May. However, Jibhkate argues that more needs to be done.

"The production of the vaccines will need to be increased as the demand is going high. Now, even people over 18 will be allowed to get the jab after 1 May. The region or places having a lot of Covid active cases should be provided a large number of vaccines to curb the rapid spread of the virus," he added.

Another doctor – Khyati Chauhan, a Delhi-based BHMS – said that people's lack of trust in the vaccine is stalling the rollout.

"The anxiousness is there due to the slight uncertainty as to the effects of the vaccine. People have been frequently instilled by the posts over the social media about the futility of the vaccines. While most of them are waiting for the pandemic to subside using preventive measures. But this virus is more infective and needs active measures to be controlled. Vaccination is the need of the hour," Dr. Chauhan said.

Recently, the Indian Council of Medical Research (ICMR) shared that the post-vaccination COVID infection rate in the country is just 0.04 percent.

"The contraction of virus after being inoculated with a single or both doses of the vaccine is referred to as post-vaccination breakthrough infection," ICMR Director-General Dr. Balram Bhargava explained during a Health Ministry.

Earlier in January, the Drug Controller General of India approved two vaccines – Oxford-AstraZeneca’s Covishield and Bharat Biotech’s Covaxin, which has been cleared for restricted use in emergency situations.

However, vaccine makers in India have not been able to keep up with demand.

Both Bharat Biotech and the Serum Institute of India, whose vaccines are currently authorised for emergency use in India, have asked the government for funds to help ramp up production.

India recently cleared Russia's Sputnik V vaccine for emergency use, making it the third coronavirus vaccine to be cleared by the drug regulator.