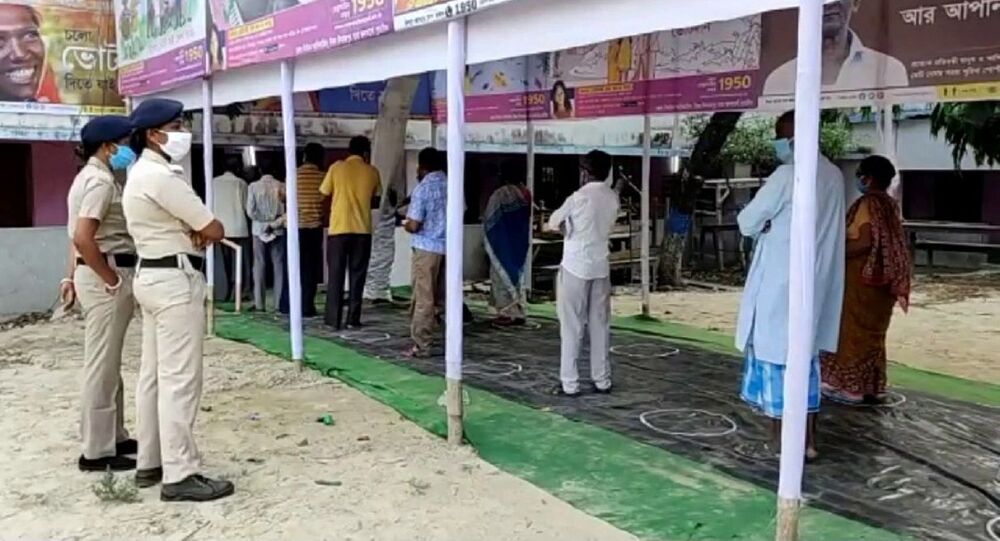 India’s West Bengal is among the five states in the country that have been holding assembly elections since 27 March. The elections being held in West Bengal, Tamil Nadu, Kerala, Assam, and Puducherry have been divided into eight phases and the counting of all states' results will be declared on 2 May.

India's West Bengal state on Thursday entered into the sixth phase of ongoing assembly elections. Residents of 43 constituencies across four districts --Uttar Dinajpur, Nadia, North 24 Parganas and Purba Bardhaman – are visiting the polling booths to cast their votes despite  over 63,000 active COVID cases in the state as well as reports of violent incidents.

Photos of masked voters lining up in queues following social distancing protocols in West Bengal have surfaced on social media.

A voter at a booth near Nandigram village, Katwa, Purba Bardhaman given first aid by @ITBP_official medic during 6th phase #WestBengalElections2021 pic.twitter.com/X3m4x68P0E

​There is a sense of panic amongst voters in the North 24 Parganas district because this morning, the body of an unidentified man with stab wounds was recovered from a pond located in the city’s Habra region.

In the same city, a local leader of the state's ruling Trinamool Congress (TMC) reportedly suffered injuries following an alleged violent encounter with members of the opposition Bharatiya Janata Party (BJP), which has denied all such allegations.

The people of West Bengal are voting to elect a new assembly. On the sixth phase today, urging those whose seats are polling to exercise their franchise.

​West Bengal Assembly polls are being held for a total of 294 seats.