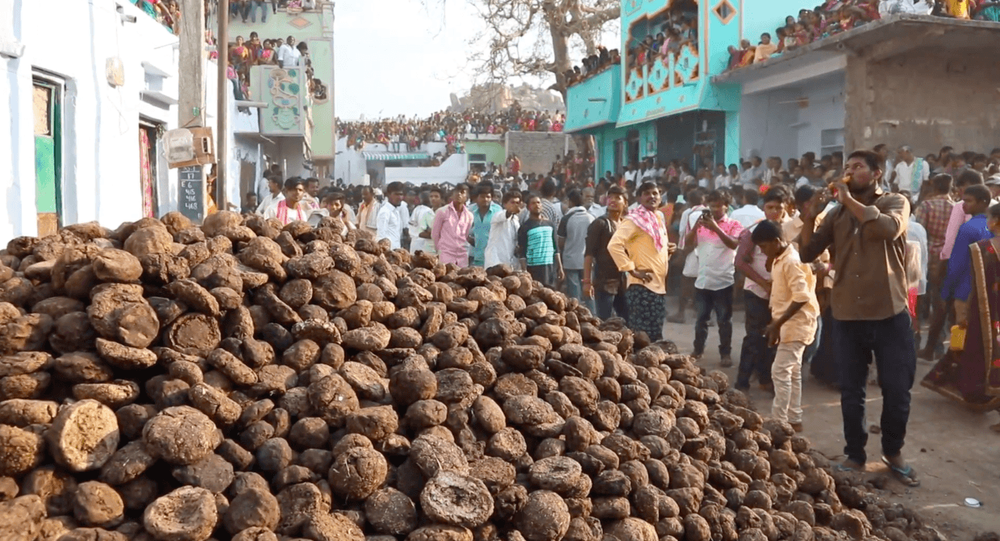 India has been witnessing record numbers of Covid cases on a daily basis over the past 10 days, following which several states have been forced to reintroduce lockdown-like curbs on social movement. The Delhi government also announced a weekend curfew on Thursday.

Amid a record surge in the number of Covid cases in the country, thousands of people in India's Andhra Pradesh celebrated the regional festival Ugadi in their unique traditional way – hurling cow dung cakes at each other.

A video of people cheerily hurling cow dung cakes at one another as part of the Ugadi celebrations in Kurnool district is going viral on social media. People can be seen violating the Covid norms, as no one in the video is seen maintaining social distance or wearing mask.

As per the rituals, the dung cakes are made a month ahead of the celebration and thrown as part of a traditional contest.

Ugadi, or the beginning of a new age (New Year) as per the lunar calendar, is observed in the Indian states of Andhra Pradesh, Telangana, and neighbouring Karnataka.

According to police, more than 100 people were injured in the traditional fight, but no official police complaint was made.

The celebrations were witnessed amid consistently mounting Covid cases in the country.

According to the government, India on Wednesday witnessed 200,739 new cases, a new record daily surge. Several states including Maharashtra, Delhi, and Punjab, have imposed strict measure to keep check on the rising cases.