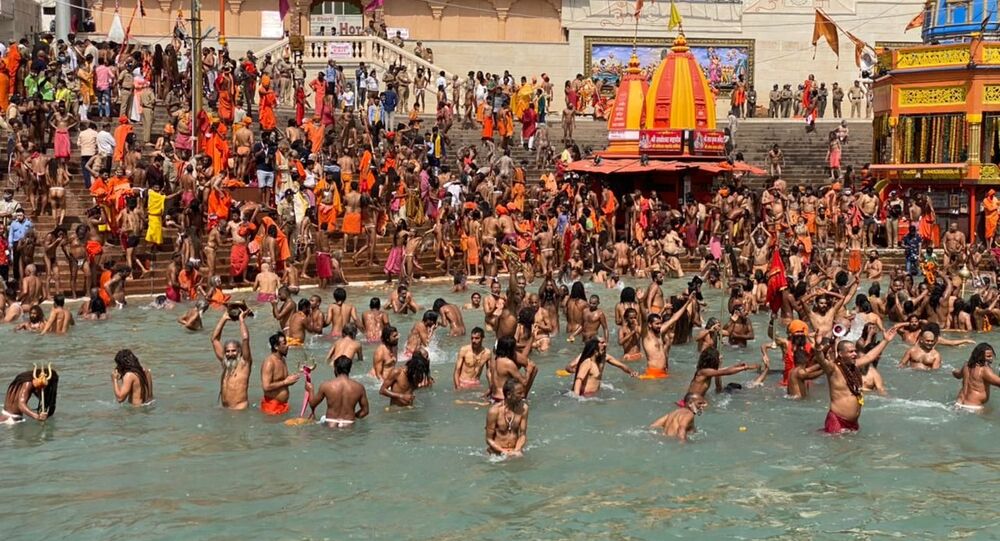 On 13 April, over 100 attendees of the ongoing massive Hindu congregation Kumbh Mela in the Indian city of Haridwar tested positive for Coronavirus. Since this congregation is generally attended by millions nationwide, the detection of over 100 COVID-positive attendees has signalled the possibility of a larger outbreak of the deadly virus.

Despite a steep surge in COVID-positive cases, thousands of devotees have converged in India's Haridwar city for the third “Shahi Snan” (royal bath) in the sacred water of the Ganges river on Wednesday.

It is said a holy dip in this river absolves people of all their sins, especially during the ongoing Kumbh Mela. The a Hindu congregation that started on 11 March this year in Haridwar, located in Uttarkhand state, will culminate on 27 April.

At this point in time, several Indian states and cities including Mumbai and Delhi remain under strict lockdowns curbs, visuals of the crowded 'Har Ki Pauri', the main river bank and its nearby point, in Haridwar have emerged on social media, offering a glimpse of the prevailing situation.

Not only are thousands of people collectively taking a dip in the river, most are seen without masks, pushing and shoving each other into the crowds.

​The visuals from Haridwar also show police officials standing on the river banks with the masses, watching the rule infractions helplessly along with other people.  No social distancing is being followed near the banks of the Ganges, pictures obtained by Sputnik reveal.

Look at these police officials from #Haridwar, helplessly gazing at the #KumbhMadness amid rising cases.

If this is not scary, what is? pic.twitter.com/7d6DbHHZff

​The state authorities of Uttarakhand have advised Kumbh attendees to follow COVID protocols after several reporters slammed the state officials for not mandating the basic thermal screening and COVID-negative report for the attendees.

Kumbh Mela, which is celebrated four times over a course of 12 years in India spanning four locations - Prayagraj, Ujjain, Haridwar, and Nashik – is scheduled according to the planetary positions of the Sun, Moon and Jupiter. Under a certain alignment of these celestial bodies, Hindus believe that the water of the Ganges turns into an elixir of purification, allowing devotees to cleanse their souls of sins as they take dips in the water.

The religious gathering during Kumbh, generally considered highly auspicious by Hindus, is being called a “ticking time bomb” this year by some netizens.

This week, India surpassed Brazil to become the second worst COVID-infected nation in the world following the US.