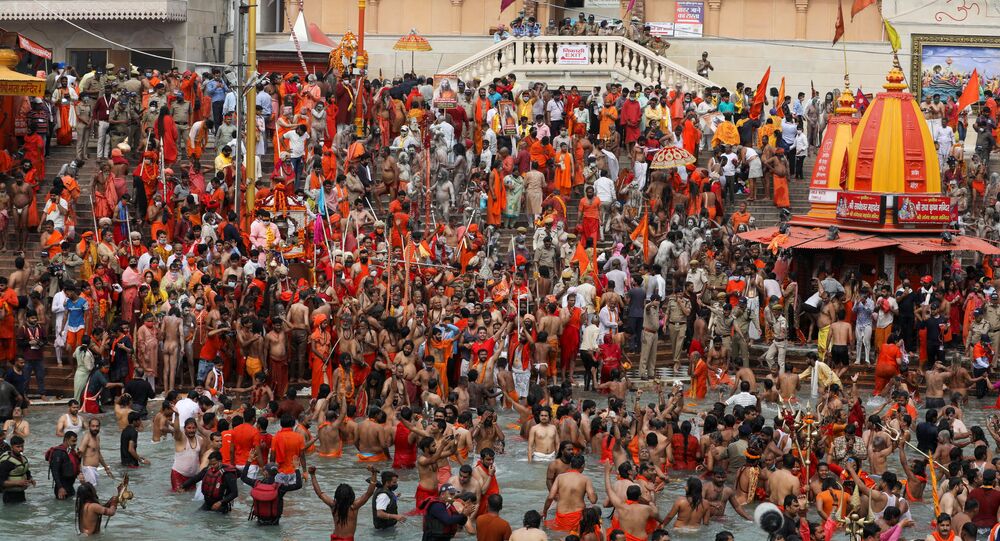 Earlier this week, India surpassed Brazil to become the second most COVID-affected country in the world behind the US. Several Indian states have introduced partial lockdowns and night curfews in a number of cities following a drastic spike in the number of cases and fatalities.

Almost 72 hours after testing over 18,000 people at a Hindu gathering during Kumbh Mela celebrations in the city of Haridwar in Uttarakhand state, more than 100 people have tested positive for COVID.

On 11 April, over 280,000 devotees from all over the country attended the second Shahi Snan (Royal Bath) in the Ganges as part of the ongoing festivities.

© REUTERS / DANISH SIDDIQUI
Almost 2 Million Indians Gather on Banks of Ganges for Hindu Festival, Despite COVID Pandemic
Images of revellers flouting coronavirus restrictions and taking collective dips in the holy river have been surfacing online for some days now. Journalists working on the ground have also reported that there are no temperature checks in place to monitor possible COVID symptoms among the devotees flocking to the banks of the Ganges.

The news of over 100 people testing positive has created panic.

Netizens have been criticising the mass gathering as India is being choked by a second wave of the pandemic, saying the festival is like a ticking time bomb for the rest of the country.

Just realised this as i was talking to a friend. It's not just a kumbh issue, it's a ticking time bomb for everyone. Yikes https://t.co/q6QTXxrEjd

People were allowed to enter despite not having a negative RT-PCR report.

102 people have tested Covid positive at #Kumbh. 28 lakh devotees visited #Haridwar on Monday. There is no thermal screening nor any action against those not wearing masks. The lives of lakhs of devotees are being put at risk due to the negligence of the Uttarakhand govt.

​As of now, the Uttarakhand state government under its newly elected chief Tirath Singh Rawat has not commented on the fresh outbreak.

Kumbh Mela, which is celebrated four times over the course of 12 years in India in four locations, Prayagraj, Ujjain, Haridwar, and Nashik, is dictated by the positions of the Sun, Moon, and Jupiter.

© REUTERS / ANUSHREE FADNAVIS
Comparison Between Tablighi Jamaat, Kumbh Mela Congregations Fuels Hindu-Muslim Disharmony in India
Under a certain alignment of these celestial bodies, Hindus believe that the water of the Ganges turns into an elixir of purification, allowing devotees to cleanse their souls as they bathe in the water. The Maha Kumbh, which happens once in 12 years, is one of the largest religious gatherings in the world.

This year, however, instead of bringing festive cheer and salvation from sin, Kumbh Mela has paved the way for a surge in coronavirus infections.

In the last 24 hours, India has recorded a massive rise of 161,736 COVID cases, taking its total tally to nearly 13.7 million. In addition, India has also seen 880 virus-related deaths in the last day, with 171,089 fatalities registered overall so far.