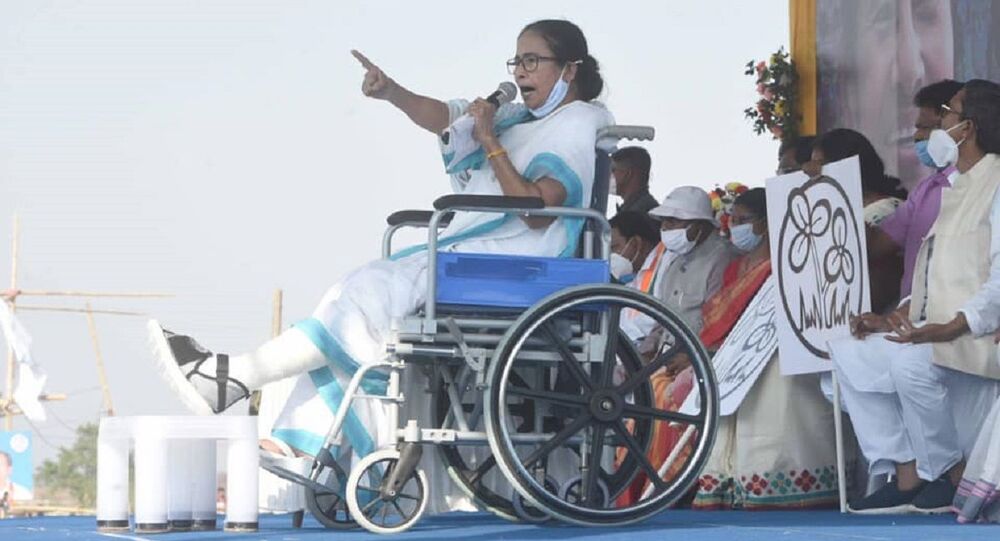 India's West Bengal state assembly elections are being held in eight phases this year, with half of them already conducted. The next phase will be held on 17 April and the final results will be announced on 2 May.

On Tuesday, India's West Bengal state chief and Trinamool Congress supremo Mamata Banerjee began her sit-in protest after the Election Commission of India (ECI) imposed a campaigning ban on her for 24 hours.

At least two paintings done in the last one hour that Mamata Banerjee has been sitting on protest at Gandhi Murti #Kolkata #BattleForBengal pic.twitter.com/oDraoRkOC6

​The ECI on Monday barred Banerjee from campaigning from 8 pm (local time) of 12 April to 8 pm the following day.

The poll panel was unsatisfied with Banerjee’s response after she was flagged for her remarks against the central government and a statement with alleged religious overtones.

Last week the ECI issued her a notice following her appeal for votes along communal lines, saying that it was a violation of Section 123 of the Representation of the People Act.

"Commission hereby condemns such statements potent with serious law and order problems across the state (s) and sternly warns Mamata Banerjee and advises her to desist from using such statements while making public utterances during the period when Model Code of Conduct is in force," the ECI stated.

Hours after the ECI notice was issued, she took to Twitter to brand the move "undemocratic and unconstitutional."

To protest against the undemocratic and unconstitutional decision of the Election Commission of India, I will sit on dharna tomorrow at Gandhi Murti, Kolkata from 12 noon.

​Assembly polls are being held for 294 seats of the West Bengal state legislature and vote counting will be held on 2 May. The Bharatiya Janata Party (BJP) is hopiong to defeat the Mamata Banerjee-led Trinamool Congress government, which has governed the state for 10 years.