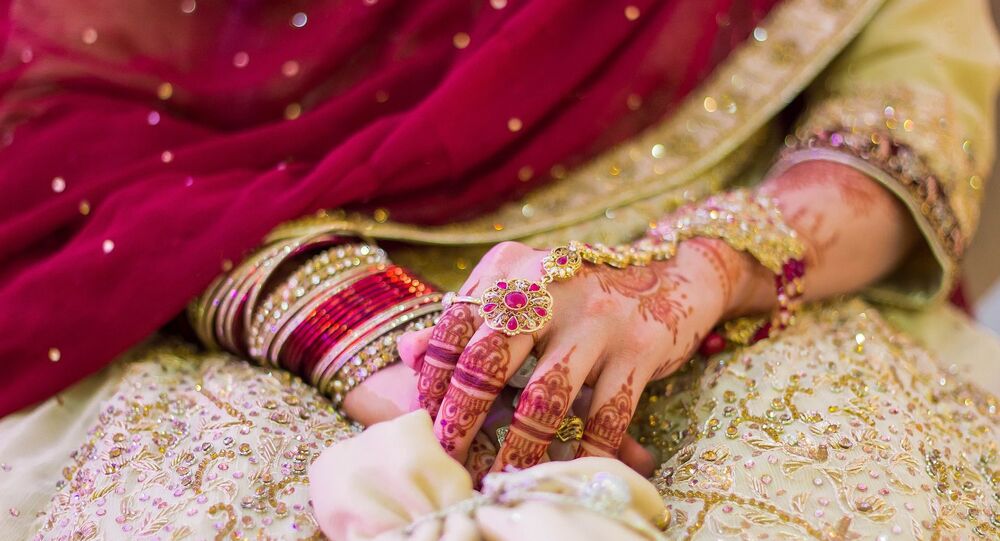 Several Indian states and cities have released a set of restrictive guidelines in a bid to check the steep rise in coronavirus cases. The major metro cities, Mumbai and Delhi, have prohibited residents from wandering around at night, have shut down schools and colleges again, as well as limited the number of attendees at funerals and weddings.

In India, auspicious dates for weddings are pre-appointed by priests. Every city witnesses a number of brides and grooms shopping around, distributing invitation cards and preparing for their big day.

While usually the lucky dates to get hitched flood India’s winter calendar, there are a few dates in summer as well.

This year was no different until a few weeks ago, when the number of coronavirus cases in the country began rising dramatically again after a brief halt.

With a fresh wave of COVID-19 hitting the Indian capital, the "brides" of Delhi have turned into “panicking bridezillas” because after months of expensive and extensive planning, their wedding ceremonies have suddenly been dragged under the clouds of uncertainty.

As a precaution, the number of wedding attendees in Delhi has been restricted to just 50, including the bride and the groom, until 30 April. The guest numbers will be reviewed again according to the situation in May.

Speaking to Sputnik, Delhi-based journalist Taniya Tikoo who is set to tie the knot mid-May in Delhi (hopefully), says that instead of feeling the excitement of beginning a fresh chapter of her life, she is severely anxious.

“It is so difficult to plan anything for the wedding, with policies changing every day. I am constantly anxious. The pre-wedding times when I am supposed to enjoy with friends, go out to shops, I have confined myself at home, hoping not too catch the virus. It’s a nightmare. I think brides will turn to bridezillas under these circumstances,” shares Tikoo.

Usually, Indian weddings go on overnight before the bride is officially given, there are farewells during the dawn period after a night full of rituals and ceremonies. Because the Delhi government has imposed night curfews as a preventative measure against coronavirus, young couples and their families have been left wondering how the ceremonies will happen.

Several bookings, especially from Noida and Delhi in India’s National Capital Region (NCR) are now being shifted to Gurugram city, which shares borders with Delhi but falls under the Haryana state. As of now, Haryana allows 200 guests to attend functions in the state.

“This is petrifying. The shopping has come to an indefinite halt. Catering and hall bookings have already been paid for by us months ago and now all that food will go to waste. Most hotels are refraining from issuing immediate refunds on changes or cancellations because their businesses are also going under the bridge. We are not even sure if our friends from out of town would be able to come for our wedding. The stress has become very real,” laments Puneet Kapani, a media professional also based in Delhi.

Several banquet owners from Delhi have revealed to the media that at least 25 percent of the bookings have been cancelled due to the restrictive circumstances.

In July last year, several wedding ceremonies in different parts of India emerged as epicentres of coronavirus, some even leading to the deaths of the bride and/or the groom as well as their relatives who were attending the ceremonies.

In a record-breaking high, India on Monday reported a total of 168,912 Covid-19 cases oover the last 24 hours along with 904 deaths. As per India’s Health Ministry, the country is not only the second-worst nation around the world with 13,527,717 total cases, but is also the world’s fourth-worst hit country in terms of active cases.

Just like Delhi and Mumbai, restrictions on public gatherings have also frustrated the wedding plans of people in other parts of India, especially Maharashtra, Tamil Nadu and Madhya Pradesh.