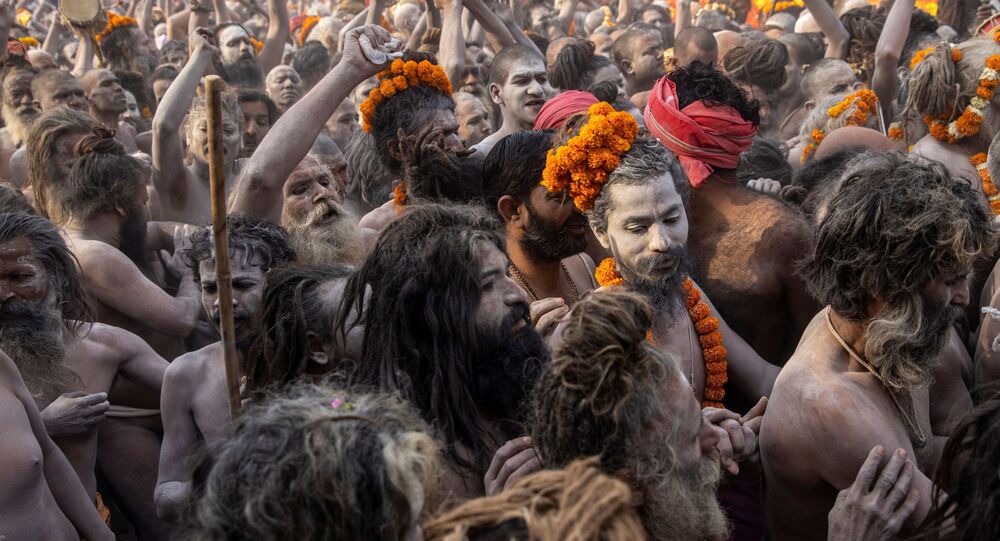 Hindu tradition dictates that a holy dip in the Ganges absolves one of all sins, which is why so. many Indians have gathered on its shores, despite the pandemic.

Thousands of Naga Babas, the ash-smeared naked holy men – alongside seers and hundreds of thousands of others – took a collective ceremonial dip in the sacred Ganges river on Monday in India’s Haridwar city, despite social distancing regulations.

For the Hindu “Kumbh Mela” festival, bathing in the river is an important ritual, which is why massive crowds gathered on its banks. The majority of people weren't wearing masks.

Around 1.7 million people are estimated to have congregated to celebrate the festival as the COVID pandemic grips India.

It's believed that the water from the river turns into purifying nectar, allowing devotees to cleanse their souls as they take a bath and seek salvation.

While 11 March marked the first "Shahi Snan" (royal bath), 12 April marked the second, while the third cleansing is set for 14 April. The final festive bath is scheduled for 27 April.

​Sea of Devotees in Haridwar

Videos and photos of the heavily crowded banks of the Ganges from Haridwar, the city located in India’s Uttarakhand state, are flooding social media, showing little concern for COVID-19 protocols.

People can be seen jostling for space and shoving each other in the huge crowds. India has reported 168,912 positive COVID cases on Monday, meaning its surpassed Brazil to become the second-most affected country globally by the virus. The overall count reached 13.5 million, overtaking Brazil's 13.4 million cases. India is now only behind the United States, which has reported more than 31 million cases.

Officials in Haridwar told the media that they are struggling to impose safety measures due to the huge crowds..