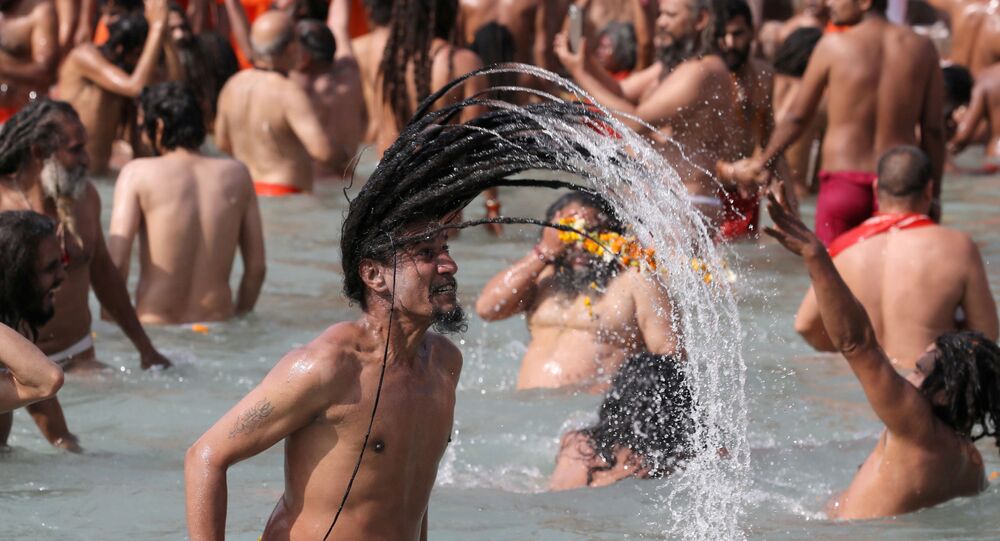 In March 2020, over 2,000 Islamic scholars from around the world reached the famous Hazrat Nizamuddin area of Delhi to attend the annual Muslim congregation of Tablighi Jamaat. By April, when the same area began reporting COVID cases, Tablighi Jamaat and its members were accused of contributing to a major virus outbreak in Delhi.

A year after an Islamic missionary society's congregation was accused of spreading coronavirus in Delhi, a massive congregation of Hindu devotees is being held as part of "Kumbh Mela" celebrations in the Indian city of Haridwar.

© AFP 2021 / MONEY SHARMA
Millions of Hindu Devotees Set to Take 'Holy Bath' in Ganges on Kumbh Mela Amid Surge in COVID Cases
As the country is witnessing record-breaking numbers of COVID cases, the Hindu religious gathering called the "Kumbh Mela" is flourishing in all its glory on the banks of holy river Ganges in Haridwar, located in the Himalayan state of Uttarakhand.

Videos and photos of heavily crowded banks of the Ganges from Haridwar have flooded social media in India, clearly showing no COVID-19 protocols are being followed there. The attendees are pushing and shoving each other into the crowds, multiple people are also seen unmasked. Collective dips in the water of the Ganges are also a shocking sight for many locals, especially when India has reported over 100,000 positive cases every day for the past few days.

These visuals have sparked a major debate on social media, where Indian liberals and secularists are calling out Hindus for being hypocrites for enjoying and supporting their religious gatherings but calling Tablighi Jamaat attendees “terrorists” for gathering last year and spreading the virus in the early days of the epidemic.

Some members of the Muslim community have also pointed out that India and its national media owe Islamic scholars an "unconditional apology".

All the folks, including politicians & news channels, that went berserk over Tablighi Jamaat even deeming it "Corona jihad" last year at the beginning of the pandemic seem to have suddenly lost their voice over Kumbh. Hypocrisy got your throat? Shameless bigots. This is criminal https://t.co/mXDBb7Pn8s

Last year, the media ran a vile propaganda against the Tablighi Jamaat.

It is so disgusting to see the double standards of the media! pic.twitter.com/bU3rOZbdK3

Tablighi Jamaat were hounded for a meet organised when Govt was saying “Corona is not a health emergency” and total cases were less than 5000. Today when Cases are in Lakhs everyday, Kumbh Jamaat and Shahi Snan Jamaat have gathered in Lakhs to spread Covid all over India

​The Kumbh Mela, which is celebrated four times over a course of 12 years in India in four locations (Prayagraj, Ujjain, Haridwar, and Nashik), is scheduled according to the positions of the Sun, Moon and Jupiter. Under a certain alignment of these celestial bodies, Hindus believe that the water of the Ganges turns into an elixir of purification, allowing devotees to cleanse their souls of sins as they take dips in the water.

This year, the Hindu congregation started on 11 March and will culminate on 27 April in Haridwar.

Local police officials have repeatedly told the media that it is very difficult to maintain social distancing among the crowds right now. However, cops have been trying to get as many people as possible to wear masks.

As per standard operating procedures, only those devotees who have a negative COVID-19 test done 72 hours prior to the date of visit will be allowed to enter the area. Check posts and entry points have been established at the district borders.

As for the Islamic scholars who had flown to Delhi from other countries last year to attend Tablighi Jamaat, India slapped a 10-year travel ban on them last year as a punishment for gathering during a pandemic and propagating it.

As of now, Indian politicians, especially from the pro-Hindu ruling Bharatiya Janata Party (BJP) have not commented on the ongoing Kumbh Mela, which is drawing Hindu devotees from around the country to Haridwar.

In a record-breaking high, India on Monday reported a total of 168,912 COVID-19 cases over the last 24 hours along with 904 deaths. As per India’s Health Ministry, the country is not only the second-worst nation around the world with 13,527,717 total cases, but is also the world’s fourth-worst hit country in terms of active cases.