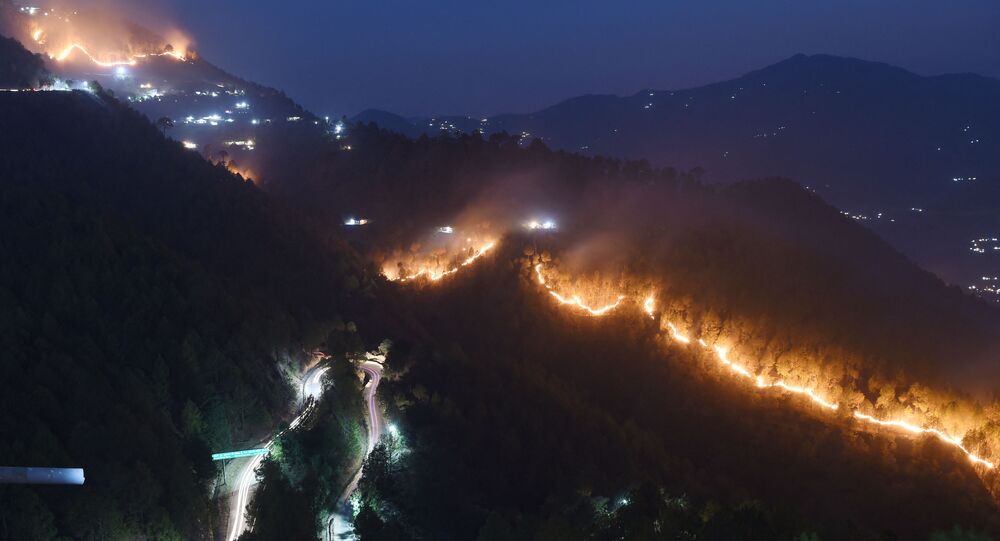 The Indian state of Uttarakhand is currently battling 45 active forest fires. The state chief claims to have deployed around 12,000 forest workers, and 1,300 fire crew stations to douse the flames. It has already spread across 67 hectares of land.

India's Himalayan state of Uttarakhand, which has 71% of its area under forest cover spread over 38,000 square kilometres, lacks effective laws or strategies to deal with yearly forest fires, say experts.

Forest fires are a regular occurrence in the state, usually in mid-February and last until the onset of the monsoon in mid-June.

Speaking to Sputnik, Dr Jagdish Krishnaswamy, senior researcher at the Ashoka Trust for Research in Ecology and the Environment (ATREE), a research institute focussing on biodiversity conservation and sustainable development, said, "There is a lack of winter rains in the state. Normally, the state receives 50 millimetres of snow or rainfall from December to March, but it was only 10 millimetres this year. Due to global warming, the state is receiving less rainfall", says Dr Krishnaswamy.

"All these factors are contributing to dry vegetation which easily results in the spreading of forest fires", he added.

"Post-monsoon rainfall plays a vital role in the Himalayas' vegetation and deciding the temperature of the forest", Krishnaswamy said.

Anoop Nautiyal, an Uttarakhand-based environmentalist and founder of a social development for communities foundation said, "The only way to deal with forest fires is getting locals involved. Dousing forest fires should be a people's movement, and a policy should be made on it".

"The forest is so huge, and no official can check the entire forest every week. Hence, local people should be taught techniques like how to check the fire in advance. And, how to control fire when no water is available around the area", Nautiyal said.

"Every year, fire causes massive loss to the biodiversity of the Himalayan state, and the state government has failed to take any step in this regard," he said.

According to the state media report, so far six people have died due to fire. The federal government has sent two Indian Air Force helicopters to douse to help the state. Federal Home Minister Amit Shah has also assured all necessary help to the state government.