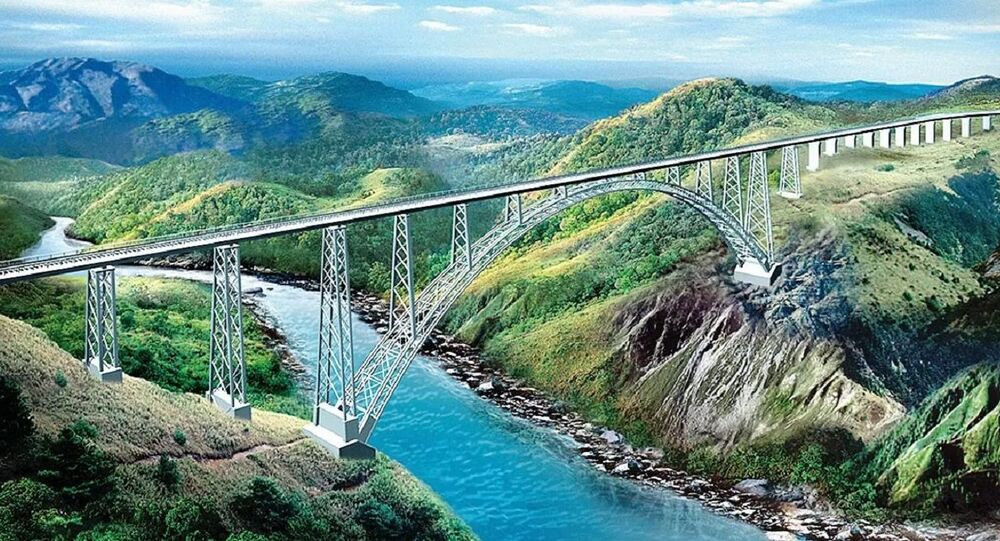 The Chenab Bridge is just 60 km away from the militarised Line of Control between India and Pakistan in Jammu and Kashmir. It has critical strategic importance as it connects Kashmir with the rest of India and will pave the way for uninterrupted transportation of weapons and equipment to the border.

People living in India's Jammu and Kashmir region will be able to travel beyond the state by train after the Chenab Bridge is completed.

The $92-million bridge is a part of the Jammu-Udhampur-Srinagar-Baramulla Rail Line (JUSBRL) project being undertaken by the Ministry of Indian Railways. The bridge will include a 14-metre-wide dual carriageway and a 1.2-metre-wide central verge.

The project is expected to be finished by December 2021 – it will be in operation for 120 years and contribute to the economic development of the state.

The Chenab Bridge – 1,315 metres long and 359 metres high – will be the tallest railway arch bridge in the world, standing 35 metres higher than the iconic Eiffel Tower in Paris.

It will cross over the deep gorges of the Chenab River and connect Kashmir Valley with Udhampur, the northern command headquarters of the Indian Army.

It's also the first steel arch bridge in India and is designed to withstand temperatures as low as -20 degrees Celsius and wind speeds of up to 200 kmph.

Jammu and Kashmir is prone to terrorist attacks so the bridge will be fortified with 63-mm-thick special blast proof steel and concrete steel.