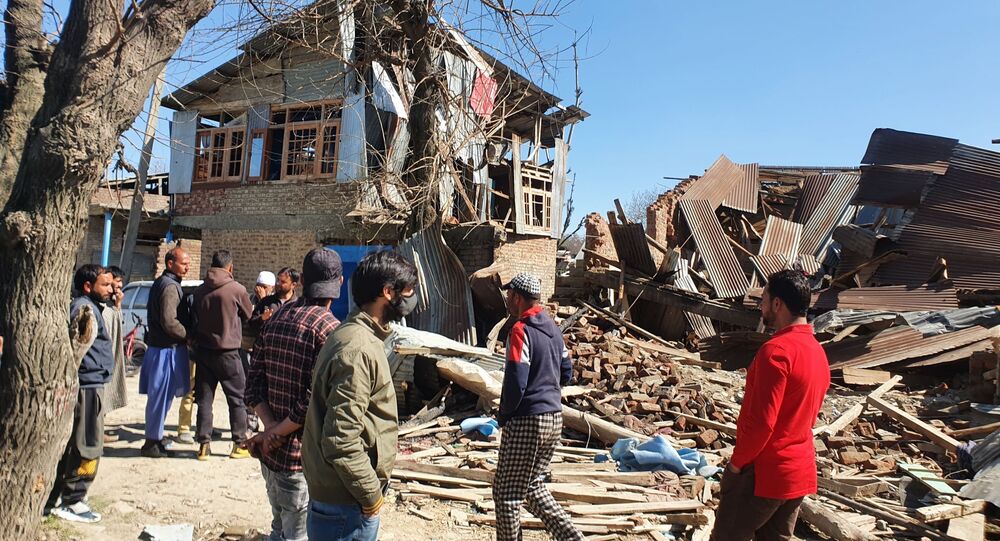 Public anger against New Delhi in the Kashmir Valley, disputed by India and Pakistan, has been brewing since the two nations' armies agreed to uphold the ceasefire agreement in February.

Twenty-five-year-old Jawed was one of several Kashmiris who threw stones at Indian security forces on 1 April when they raided a home where terrorists linked to Pakistani group Lashkar-e-Taiba (LeT) had been hiding for several days.

“The militant killed was a local. He was from south Kashmir. After the encounter got over in the morning, almost all the youth from our village rushed outside and started pelting stones. That is the only way we could express our anger,” Jawad told Sputnik.

Three terrorists were killed in the encounter in Kakpora, in southern Kashmir's Pulwama district. After the raid, local residents clashed with the Indian security forces.

As the crowd mourned the deaths of the “local boys,” who had orchestrated attacks on Indian forces, local shopkeepers downed their shutters in protest against the authorities. They said they didn’t care about losing business and that expressing solidarity with the local militants was “far more important."

© Sputnik /
Businesses in Kakapore, a village in south Kashmir's Pulwama district, were shut down in protest against Indian security forces' raid against terrorists from Pakistan-backed Lashkar-e-Toiba on 2 April. Locals say that the gunned militants were local youth

Ashraf, a student from the Islamic University of Science and Technology, was also among the crowd of locals who pelted the government forces with stones.

“They [the Indian government] say that they want to normalise things in Kashmir and bring in on path of development, That’s how they justified the decision to abrogate the special status of Jammu and Kashmir in August 2019. But how could there be development when they are ordering these operations on a regular basis?” he said.

According to statistics, only two encounters took place between Indian forces and angry locals between 1 January and 25 February, the day the Indian and Pakistani militaries agreed to the ceasefire. However, eight such encounters were recorded in the four weeks after 25 February.

“The stone pelters injured by pellets employed by security forces often don’t go to the hospital fearing retaliation by the state. In many instances, even stone pelting is not reported in the media,” Gulzar Bhat, a Srinagar-based journalist who has been covering the Kashmir conflict for more than five years, told Sputnik.

The police in Jammu and Kashmir claimed last year that there was an 87.13 percent drop in incidents of stone pelting in 2020, when stacked up against 2019's figures.

© REUTERS / DANISH ISMAIL
A man gestures after he was detained by Indian policemen during a protest near the site of a gun battle between Indian security forces and suspected militants, in Srinagar, October 12, 2020

However, local observers say that the anger against New Delhi over its commitment to the ceasefire can't be “suppressed for long,” no matter how much force is used by the government.

Dr Shahnawaz Ahmed, a Kashmir-based political analyst, says that there is a sense of anger against both India and Pakistan after the joint decision in February to uphold the ceasefire agreement.

“Kashmiris believe that if there could be a ceasefire between India and Pakistan, why couldn’t there be a similar arrangement between Indian forces and the local militants,” says Dr Shahnawaz Ahmed, a Kashmir-based political analyst.

“I squarely link these rising instances of stone pelting to a sense of betrayal being experienced by Kashmiris. They now believe that even Pakistan no longer considers the abrogation of Article 370 by India as an important matter. Kashmiris have been of the view that the dispute is a bilateral one and needs cooperation from both Islamabad and New Delhi,” adds Ahmed.

He continued that the decision to abrogate the constitutional status of the territory was never “going to be accepted” by locals.

“Article 370 was part of Kashmiri identity. It was a precondition for Kashmir’s accession to India after Independence. New Delhi may have integrated Kashmir physically with the rest of India by annulling Article 370, but they will never be able to integrate Kashmiris emotionally to the idea of the Indian state,” he says.

The dispute over Jammu and Kashmir has been ongoing since 1947. New Delhi claims sovereignty over the entirety of the region, currently divided by the LoC between India and Pakistan.