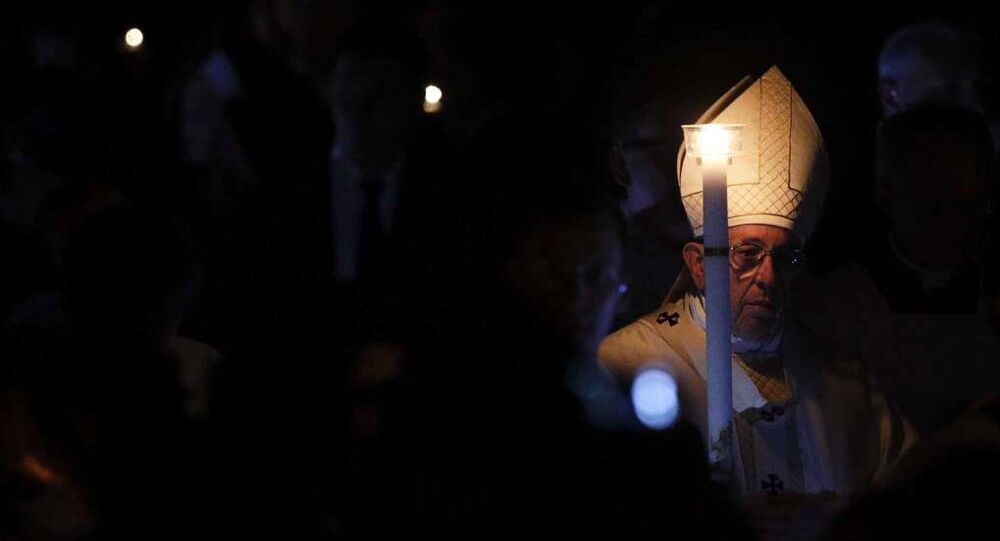 Amid what is being called the “second wave” of Covid-19, festival celebrations in India have become a relatively dull affair. After Holi, Indians are observing the festival of Easter with the Christian community. Usually, the churches and grottos around the country would flood with people, but this year the festivities have remained quiet.

© REUTERS / AMIT DAVE
Indian Prime Minister Modi: Good Friday Reminds Us About Struggles and Sacrifices of Jesus Christ
In the times of social distancing, Easter celebrations are colouring up the digital space in India, which is brimming with festive spirit. Along with several people extending Easter wishes on Twitter, Prime Minister Narendra Modi and Indian President Ram Nath Kovind also offered their “greetings on Easter” to their fellow countrymen.

In their wishes, PM Modi and President Kovind reminded people that the Biblical story of Christ's resurrection is a symbol of hope for the world amid the ongoing pandemic.

Easter greetings to all! The resurrection of Jesus Christ, celebrated across the world, gives us hope and happiness; reaffirms our faith in innate goodness of humanity. May the teachings of Jesus Christ strengthen the bonds of love, affection and harmony in our society!

On this day, we remember the pious teachings of Jesus Christ. His emphasis on social empowerment inspires millions across the world.

​This year, the traditional giving of baskets full of Easter Eggs to friends and family in India remains subdued as several cities are observing day-long curfews on Sundays to restrict public movement amid rising COVID cases in the country.

While many churches are conducting special Easter masses via virtual means, visuals of some people gathered for the midnight Easter mass in churches have appeared on social media. Unlike the usual crowded scene, the visuals showed just a few people reaching the church to offer prayers and attend masses – keeping the social distancing protocol in mind.

​His Holiness Pope Francis was among the first people to offer Easter greetings on social media with three messages.

​People from around India are also marking the festival of Jesus’ resurrection on Twitter by sending close friends and family virtual hugs and digital Easter eggs.

​According to tradition, Thomas the Apostle brought Christianity to India in the first century AD, but despite gaining followers in modern-day Kerala state, the religion failed to become widespread in the country until interaction with European missionaries increased; today Christianity is India's third most-popular religion after Hinduism and Islam, with over 30 million adherents.

Coronavirus cases are once again surging in India – despite the drive to vaccinate everybody above age 45 in the county. India's total tally of COVID-19 cases surged to 12,485,509 with 93,249 new infections. The death count in India has increased to 164,623, with 513 new fatalities, according to Union Health Ministry data updated on Sunday. The total number of recoveries in India stand at 11,629,289.