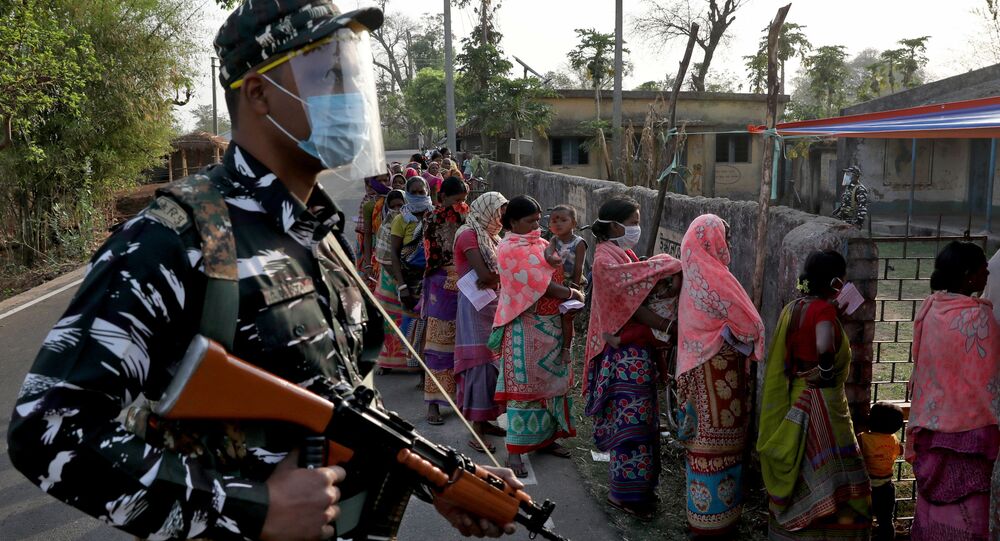 On Thursday, the second round of voting was held in the Indian state of West Bengal. So far, polling in 60 assembly constituencies has been completed. The final round of voting is scheduled for 29 April. The result for all the state's 294 seats will be announced on 2 May.

A parliamentarian from Trinamool Congress, the ruling party in West Bengal which is in the middle of state elections, has urged the district magistrate of East Midnapore to take "every precaution in advance," expressing concerns that "existing communal harmony may be blatantly disrupted."

Trinamool Congress (TMC) leader Dibyendu Adhikari’s letter came a day after leaders of his party and the opposition Bharatiya Janata Party (BJP) accused each other of booth capturing, especially at Nandigram area, from where State chief Mamata Banerjee is contesting the polls.

In the letter, the TMC leader said: "Considering the present political situation in the area, I personally apprehend that existing communal harmony may be blatantly disrupted... I request you to take precautionary measures in advance."

However, the Election Commission of India (ECI) has dismissed all the charges.

On Thursday, during the second phase of polling in the state, several incidents of clashes were reported between BJP and TMC workers.

Soon after the complaint of booth-rigging reached state chief Banerjee, she visited a few polling booths of her Nandigram constituency.

Banerjee, who is wheelchair-bound because of injuries to her her leg, got stuck at one of the polling booths, as rival crowds of TMC and BJP gathered outside and started shouting slogans against each other.

She was only able to leave the booth once a group of central forces and police personnel arrived at the site.

Later in the day, an agitated Banerjee criticised the Election Commission and alleged that the BJP had terrorised voters.

On Thursday TMC filed 63 complaints with the Election Commission regarding booth rigging and violence in the district.