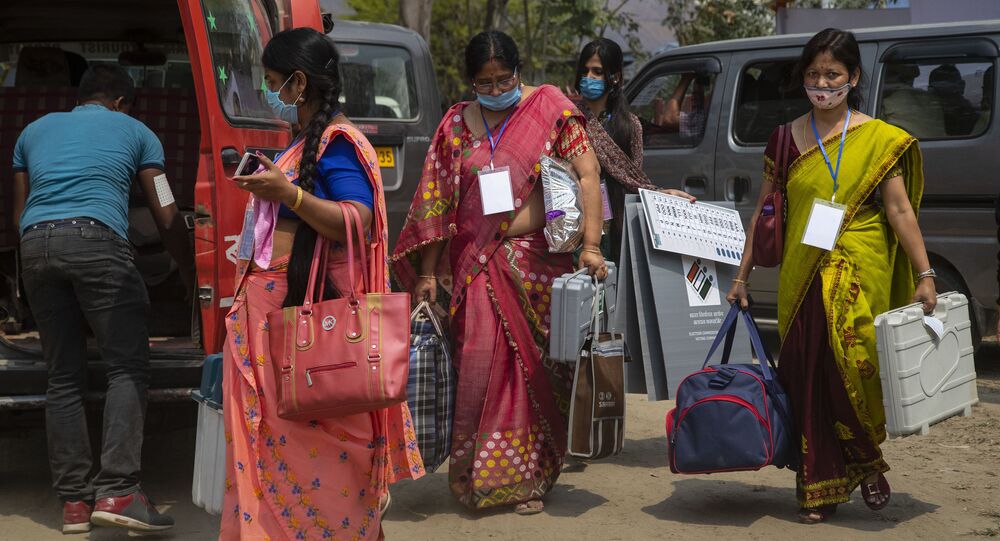 Voting in the Indian state of Assam, scheduled to be held in three phases, commenced on 27 March. People cast their votes in the second phase of voting on 1 April and the final phase will be held on 6 April. In two-phased assembly elections in 2016, the Bharatiya Janata Party and its allies won 86 of 126 seats.

The Election Commission of India (ECI) on Friday ordered a re-vote at a poling station in the state of Assam after political outrage erupted over a gross security lapse involving an active Electronic Voting Machine (EVM).

Hours after the second phase of voting concluded in Assam on Thursday, a private car thought to belong to a BJP leader was found carrying an EVM after votes were cast through the day at a polling station for the Ratabari seat in Assam's Karimganj.

Officers responsible for the transportation of EVMs belonging to the polling station have also been suspended by the Election Commission (EC).

The incident came to light after a video surfaced on social media last evening, showing an EVM in a car allegedly belonging to Patharkandi BJP candidate Krishnendu Paul.

The police reportedly had to fire into the air to disperse a mob that had surrounded the BJP leader's alleged car last night.

Many people are questioning the Election Commission of India for the major security lapse regarding the EVM.

Security protocols involving the transport of EVMs mandates strict vigilance of the machines that are kept in a double lock security system. Also, no unauthorised person can get access to the EVMs at any point of time.

Senior Congress party leader and General Secretary Priyanka Gandhi Vadra said the Election Commission needs to "act decisively in these complaints and a serious re-evaluation of the use of EVMs needs to be carried out by all national parties".

Every time there is an election videos of private vehicles caught transporting EVM’s show up. Unsurprisingly they have the following things in common:

1. The vehicles usually belong to BJP candidates or their associates. ....

2. The videos are taken as one off incidents and dismissed as aberrations

3. The BJP uses its media machinery to accuse those who exposed the videos as sore losers.

The fact is that too many such incidents are being reported and nothing is being done about them. 2/3

This is the only way the BJP can win Assam: by looting EVMs. EVM capturing, like there used to be booth capturing. All under the nose of the Election Commission. Sad day for democracy. #EVM_theft_Assam #AssamAssemblyElection2021 https://t.co/5dmlu67Uui

This is profoundly shocking. Even critics of the slide in India’s democratic culture have said our elections at least are free&fair but we have become an “electoral autocracy”. If EVMs become suspect then what is left? The Election Commission must investigate urgently &openly! https://t.co/FPMlZVXgMt

​Many netizens are also taking a dig at the BJP and the Election Commission over the incident.

Whenever polling officials vehicle breaks down, vehicle of BJP candidate is always there to give lift.#EVM_theft_Assam #EVMTheftbyBJP https://t.co/WnwZ39JotV

If you still believe that @ECISVEEP is conducting free and fair election in India, then you're a fool!
The country has literally gone to the dogs!
Shame on you @ECISVEEP!
Shame on you @BJP4India!#EVMचोरभाजपा #EVM_theft_Assam #BJPdestroysDemocracy pic.twitter.com/Srvp1SHnjF