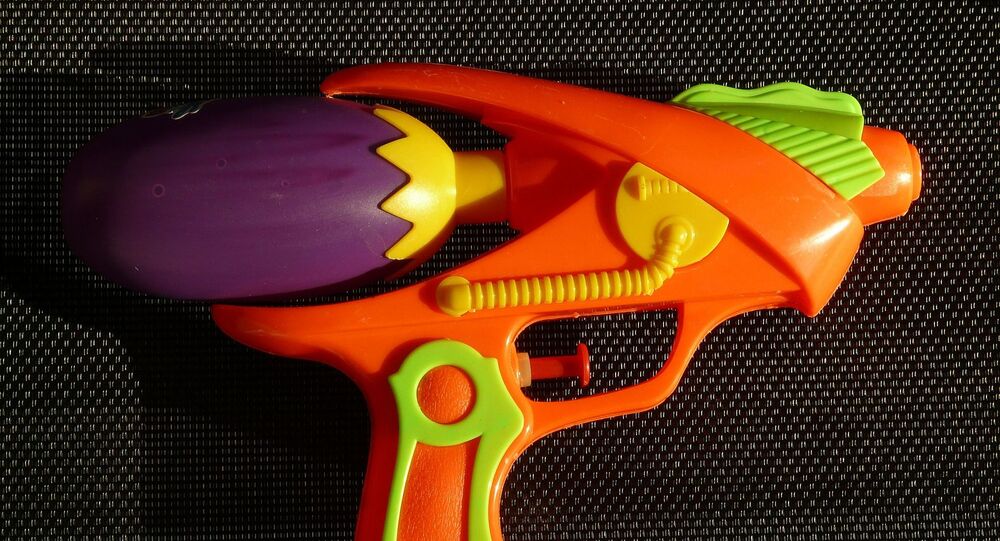 Videos posted on social media show that India's streets are a hotbed of robberies, heists and bag-snatching. However, an investigation found that a large number of such crimes were carried out with dummy firearms.

On 5 March, a 25-year-old man looted $5,200 from a hosiery businessman and his wife in Gwalior, a large city in the Indian state of Madhya Pradesh. An investigation revealed that the man robbed the house with the help of a toy gun.

In another incident, Oshiwara Police arrested a 23-year-old gym trainer in January for stealing an iPhone from a shop owner while pointing a gun at him in Mumbai, considered the city of gangsters. However, police found that the crime was carried out with a toy gun bought by the suspect at a local market.

Speaking to Sputnik, a senior Delhi police officer revealed - on condition of anonymity - that the easily available toy guns are not uncommon weapons in the hands of criminals. In Delhi, investigating officers have found at least 14 recorded instances of dummy firearms being used in bank robberies, street crimes, snatching, and extortion.

"In two of the last four bank robberies reported in Delhi this year, the miscreants used toy guns – in one instance it served as the lone weapon and in the other as a back-up weapon," the officer said.

He also said that in January, there were three separate crime incidents involving toy guns seized by the Delhi Police.

"In one of those cases, the gun was used for extortion [when the perpetrator] posed as a crime branch inspector. He used the fake gun to extort 'fines' from people not wearing a mask in the Govindpuri area in Delhi. In another, a toy gun was used to steal a mobile phone from a cab driver," the officer added.

In none of the 14 known instances did the victim suspect that gun was anything but real.

According to data accessed by Sputnik, incidents of snatching in Delhi have steadily increased in the past two years: 7,965 cases were registered in 2020, sharply up on the 6,266 cases recorded in 2019.

Similarly, Uttar Pradesh state police officials also told Sputnik that cases are piling up in their records and that most of the cases are carried out with the help of fake firearms.

Police officials from different states have said that an offence cannot be deemed trivial just because a toy gun was used, and there are a number of reasons criminals will choose fake weapons.

“First, the criminals are now aware that if they use a toy gun, they won’t be able to kill someone, even if the situation turns ugly. So that rules out the possibility of being tried under the Arms Act", Prakash Singh, a  former police chief from Uttar Pradesh, said, adding that although police do not apply the Arms Act, a case of robbery stands, and the charges stand the scrutiny of the court.

Indian laws do not forbid people to own a toy gun, and they are easily available in shops and online. However, the government has prohibited carrying fake guns at places such as metro stations and airports because they are able to inspire the same kind of fear real guns do, police said.

"Toy guns are really cheap and are only a fraction of the price of a genuine weapon. These [toys] can be purchased from normal toy shops, online shopping platforms, sold as Diwali fireworks and even in the form of cigarette lighters. Some look quite realistic and there is no ban on them”, says Singh.

However, the Delhi Police spokesman, Chinmoy Biswal, says the reason criminals are falling back on toy guns is because real ones are so hard to come by.

“In 2020, while looking for proclaimed offenders, we managed to nab 93 percent of the accused who didn't have a previous crime record,” the officer said.

Inexperienced criminals may also find it easier to use a toy gun rather than a real one, Biswal said. Out of the 6,496 people arrested for snatching in 2020, 5,243 were first-time offenders in Delhi. He added that toy gun mysteries are solved only after the suspect is overpowered and the gun is examined.

Bus Hijacker 'With Toy Gun': What is Known So Far About Hostage Situation in Brazil