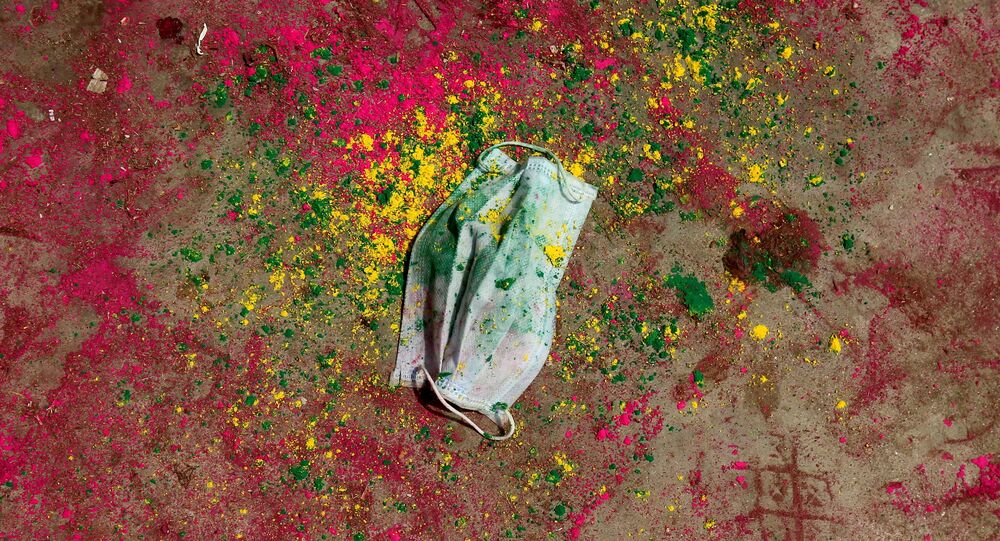 The streets are usually alive with dancing, bold colours, and laughter during Holi, but not this year. People are celebrating at home as COVID cases rise in India.

This year, Holi celebrations kicked off later than usual due to India's surging COVID cases. Usually a vibrant festival bursting with crowds and colour, this year's parties have been subdued with social distancing restrictions in place.

Most people therefore have had no choice but to honour Holi indoors quietly with just a handful of family and friends, while reminiscing about the craziness of years gone by. On 9 March 2020, streets up and down the country were filled with dancing, bold colours (people usually paint each other), and high spirits. Nostalgia, it seems, is the theme of 2021's Holi.

Huge speakers usually set up around Indian cities to pump up the party atmosphere were replaced by radios in people's homes blaring Bollywood classics this year in a bid to keep spirits high amid the gloom of the pandemic.

Vendors selling water guns, wigs, face masks, and coloured powder to throw at people say sales are down by more than 50 percent this year. Indians are taking to social media to remember the good old days, when COVID restrictions and curfews were unthinkable.

i wanna uplaod my last year holi pictures bc i wont be able to play this year :(

#HoliMadness
Missing Pre covid Holi. Earlier used to play Holi with
My friends in the society. From the 4th floor so it's possible to peep through my balcony. I watched everybody throwing gulal (colours) and water balloons on each other.
#HoliWithIDP #HoliMoments #PreCovid pic.twitter.com/ByC6Ph5vTJ

There are several myths about how Holi started in India around in the fourth century – one of the most famous tales is that of Hindu god Krishna, who was trying to befriend the love of his life goddess Radhika in the city of Mathura-Vrindavan.

​Legend has it that Lord Krishna was concerned about his dusky complexion and thought that beautiful and milky-skinned Radhika would never like him. Krishna’s mother Yashoda, according to Hindu religious scriptures, said her mischievous son should paint Radhika to make her skin darker so they would be more alike. This is why people smear coloured powder on each other during Holi.

Throwing powder over each other also has another meaning; it's a way of forgetting about appearances, differences, and contrasting religious beliefs as people are covered in bright tones to celebrate love, equality, and acceptance.

There is a Hindi tagline for Holi – “Bura Na Maano, Holi Hai” – which translates as “Don’t be offended, it's Holi.” It's chanted across the nation because on a normal day it might seem a little rude if someone chucks a load of bright powder on you in the street, but during the celebrations people are encouraged to do it, just for fun.

Not this year though – the streets are eerily empty.

#nightcurfew in #Maharashtra from Sunday amid coronavirus surge

Amid rise in coronavirus infections, Maharashtra administration announced a night curfew in the state from Sunday night to prevent the spread of the virus & to avoid large gatherings.#Holi2021#Holitension 😯 pic.twitter.com/uRKJyIxuET

#holifestival
Happy Holi everyone !! Stay safe, stay indoors.. Hopefully this will be the last Holi we celebrate indoors!! 💓😊😘 pic.twitter.com/02tmFdPLtx

​Instead of purchasing the traditional Holi sweets like gujiya, people are making desserts at home.

It’s not holi w/o homemade gujiyas....Pure talent, lots of patience and love... for so many years now, Ma doesn’t let go of this tradition and makes the best gujiyas.... ❤️
Lo aa gayi Holi 😃 #Holi2021 pic.twitter.com/cpM5Vp1XBO