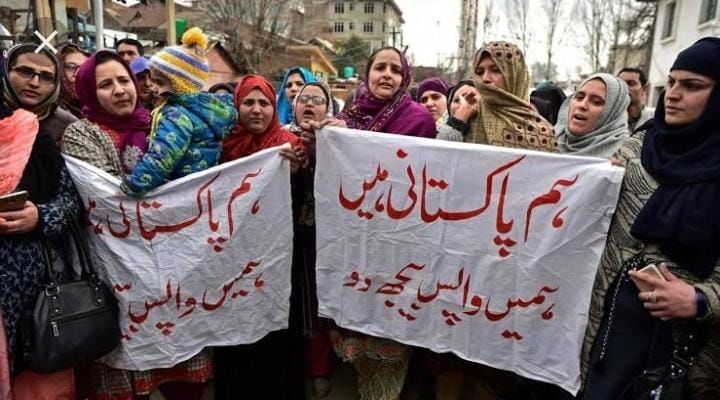 After failing to receive the proper citizenship documents from the Indian government, more than 350 women who claim to be married to Indian Kashmiris are now protesting every month demanding that the authorities send them home.

Hundreds of women who claim to be Pakistanis married to Kashmiris in India say they want to return to their home country.

One of them is Saira Javid, 43, who says her biggest regret in life is that she could not attend the funeral of her father Abdul Latif who died in September 2019 in Karachi, Pakistan. As tears well up in her eyes, Saira says she wished she'd never married an Indian Kashmiri.

She explains that moved from Karachi to the highly militarised town of Kupwara in 2011. She was abandoned by her husband Javid Ahmad a few years after getting hitched and having four children – life has since become like a prison. She claims her constant pleas to the Indian authorities to be sent back to Pakistan fall on deaf ears. Her only respite from the misery is the occasional glimpse of her hometown via stutteringly slow internet video calls with relatives in Karachi.

"I married Javid Ahmad Dar of the Indian side of Jammu and Kashmir in 2001. My husband crossed the Line of Control for arms training but gave it up to live peacefully. We had two children, and we were living peacefully in Karachi," she told Sputnik.

Kashmir has been a bone of contention between India and Pakistan since 1947 when Pakistan was established. Since the early 1990s, thousands of young people like her husband Javid crossed illegally into Pakistan to receive armed training to support the anti-Indian insurgency in Jammu and Kashmir. While in Pakistan, several married Pakistani girls.

In 2010, India announced a "rehabilitation policy" for the militants/terrorists who had fled Kashmir for Pakistan during 1989-2009.

The state government promised to prepare documents for returnees as well as their wives and children and establish counselling centres where they would reside for up to three months while all legal procedures were supposed to be wrapped up.

At the time, Saira says her husband insisted on returning to his homeland – Jammu and Kashmir – to benefit from the policy announced by the government. They returned to India through Nepal, a route that was never officially approved by authorities.

"When the Omar Abdullah government announced the rehabilitation policy, my husband, children, and I moved to Kashmir in 2011. When we returned, we were arrested and were put in Central Jail in the Indian side of Jammu and Kashmir for six months," Javid explained.

In 2017, the Jammu and Kashmir government said that 377 former terrorists and 864 family members had returned from Pakistan via Nepal and Bangladesh.

Along with their husbands, most of these women entered India through Nepal without a visa after travelling to Kathmandu on Pakistani passports.

However, most of these families, as claimed by them, destroyed their passports and other documents in order to avoid getting caught by Indian authorities before entering the country.

After arriving on the Indian side of Jammu and Kashmir, they never got the proper documents to confirm their status as the citizen of India. On the contrary, most of them were accused of illegal entry.

Meanwhile, the rehabilitation policy was scrapped in 2016 as the central government was worried that that terrorists could misuse it. The militants and their wives therefore found themselves branded illegal migrants.

Noor Begum, a widow who arrived in the village of Deebagh, Shopian in 2012 said the Indian government will not give her family citizenship or rights.

"Why are they not deporting us to Pakistan? According to the Muslim religion, a widow cannot continue to stay in her husband's home. I want to go back to my parents' house in Pakistan," Begum told Sputnik.

She also said that she's in constant touch with the Pakistani Embassy, but the government of India has not responded.

"We are a citizen of nowhere," Begum says. “Either give us proper citizenship of India or send back us to Pakistan,” she adds.

© Photo : Saira Javid
Pakistan origin-women holding a protest in Srinagar demanding from Indian authorities to deport them to Pakistan.

According to the local media, one such bride – Saira Begum – committed suicide in 2014 after her husband, a former militant, Syed Bashir Bukhari set himself on fire in the village square of Kreeri in North Kashmir.

​Bukhari’s family had struggled to obtain Indian citizenship for his Pakistani wife and schools had refused to admit their son.

On International Women's Day in 2021, former Chief of Jammu and Kashmir Dr Farooq Abdullah said the Indian government should deport migrants and refugees on humanitarian grounds.

'Welcome Developments in Jammu and Kashmir': US Indicates Taking up Kashmir Issue With India