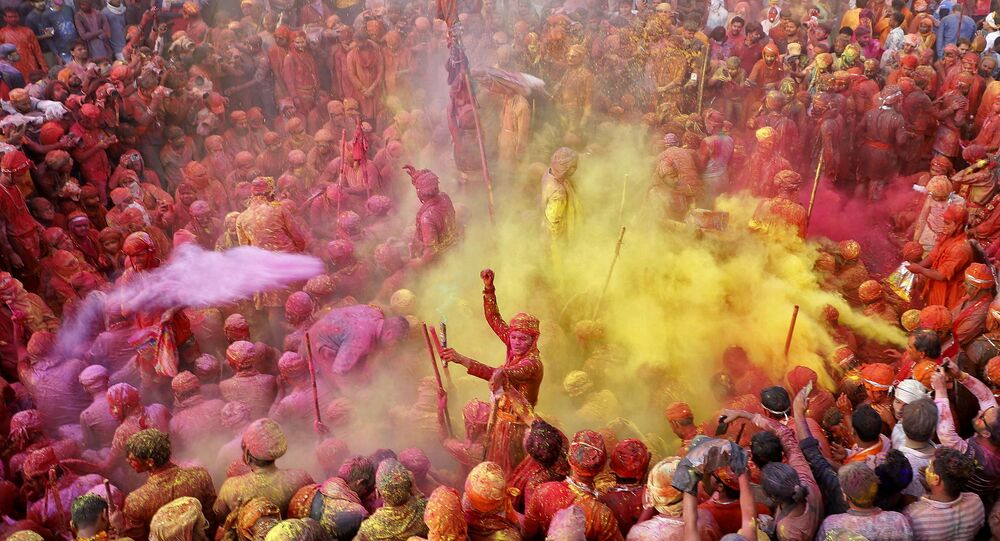 Bhanged up: Indian Celebs Share Funny Stories of Getting High on Weed Drink During Holi Parties

Holi, a popular ancient Hindu festival of colours, is celebrated with much fanfare in India. People paint gulaal (powdered colours) on each other, splash water, sing, dance, and eat traditional delicacies such as thandai (a milk-based drink) and pakoras (fried snacks).

The usually heady Holi celebrations in India have been curtailed by the pandemic this year as many people, including celebrities, have been forced to celebrate at home with family.

Several famous faces spoke to Sputnik about their past Holi parties, when it was possible to mix with lots of other people – the good old days, if you will.

For many, the Holi celebration is incomplete without “bhang,” a type of cannabis served in a traditional sweet milk-based drink called "Thandaai." Necking bhang in large quantities can lead to hallucinations and make people do bizarre things.

Actor Aamir Ali, who had bhang for the first time last year, says it made him dance non-stop.

“I didn’t realise that the milkshake that I was having had bhang in it. It hit me and I remember dancing for over two hours non-stop. People who knew me noticed that something has happened to me. It was a bhang effect,”  he told Sputnik, adding, “this Holi, I don’t want to take chances. I’ll just chill and meet a couple of friends at home.”

Gaurav Gera: ‘Ceiling fan looked like an umbrella moving on top of my head’

Actor Gaurav Gera, who had bhang for the first time seven or eight years ago, says that “it wasn’t easy to deal with."

“I remember when I lied down, I could see the ceiling fan was moving. But after some time, it felt like an umbrella was rotating on top of my head. I was getting up and going back to sleep, and again getting up. It was really funny. After that experience, I never tried bhang again,” Gaurav tells Sputnik.

Like Aamir, Gaurav also has plans “to go to a friend’s house for a small get-together.”

Chetan Hansraj: ‘I was driving my car in loop all day long’

For actor Chetan Hansraj, Holi is incomplete without bhang.

Sharing one of his funniest experiences, Chetan tells Sputnik: “Once I was at my friend's place and after having bhang, I drove my car in the same locality for hours, stopped at my friend's place to eat sweets and snacks, and again went back to driving my car. I did this in a loop for seven-eight times throughout that afternoon.”

Keeping up the festive spirits, Chetan is planning to “attend a Holi event in Goa.”

Shama Sikander: ‘It got me cracked up and I couldn’t stop eating’

Just to experience the effect of bhang, actress Shama Sikander tried it once – it cracked her up and gave her a serious appetite.

"I remember I felt so hungry that I ate so much. I just couldn’t stop eating and I couldn’t stop laughing for hours. All my friends and I were cracking up. I don’t know how we even reached home,” Shama tells Sputnik.

Like Shama, actor Hiten Tejwani got the bhang giggles.

“I was laughing non-stop and very hungry. I ate a lot and then crashed and slept throughout the day and got up in the evening and ate and slept through the night. The next day, I could feel the bhang hangover,” Hiten tells Sputnik.

Manish Goel: ‘Friend thought something happened to me and dragged me to hospital’

It turned out to be a crazy first bhang experience for actor Manish Goel as well...especially because he was unaware his drink had bhang in it.

“I was dancing, doing crazy stuff, laughing but when I sat still on the chair, within a few mins, I fell and was unconscious for a few seconds. Everyone freaked out and they decided to take me to the hospital. On the way, when I realised that I was being taken to the hospital, I started acting up and told them that I don’t want to go there. I am fine, nothing happened. It was a hell of a day,” he tells Sputnik.

This article does not promote or endorse the usage of cannabis and other recreational drugs. This piece is purely for information.

'Maha Shivratri': Shiva Worship Illuminates One of the Year's Darkest Nights in India, Here's Why