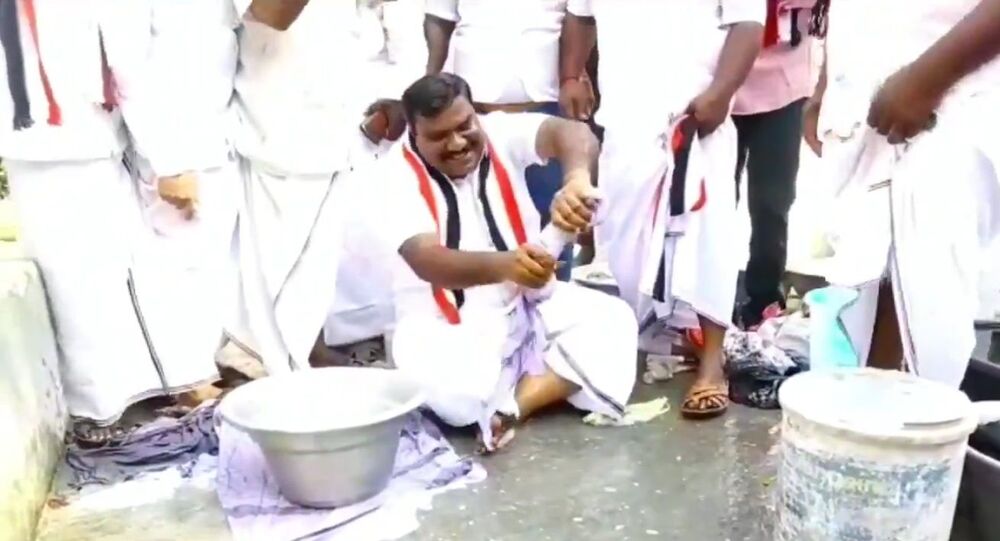 Last month, Congress leader Rahul Gandhi experimented with unconventional campaigning styles when he opted to swim with fishermen off the coast of Kollam in the Indian state of Kerala. He also cooked and ate the rice dish Kaalan while visiting another state, Tamil Nadu.

Elections are times when political leaders in India don't mind going the extra mile to woo the electorate and personally connect with them. Some of their well-known methods include reaching out to the voters via electoral rallies, local public meetings, and door-to-door campaigning.

In the Indian state of Tamil Nadu, one can find a few political candidates using out-of-the-box methods to boost their electoral campaign and ensure that they stand out, leaving an impression in voters' minds.

These included selling vegetables, washing people's clothes, cooking food, and even "begging" to draw attention and solicit votes in the upcoming elections.

Tamil Nadu's ruling party All India Anna Dravida Munnetra Kazhagam (AIADMK) candidate Thanga Kathiravan has been seen washing clothes in the middle of a road in his political constituency Nagapattinam.

He says his unique election promotion is to tell everyone that poor families need no longer suffer to do household chores, as they can now get washing machines - a poll promise in AIADMK's manifesto.

Tamil actor and independent political candidate Mansoor Ali Khan recently did a quirky campaign gig near a Hindu Temple in his constituency — Thondamuthur. He was seen squatting on the roadside near a garbage dump. He played with a street dog and asked passers-by to vote for him.

​Another candidate from the southern constituency Madurai, a city in Tamil Nadu, was seen wearing a torn undershirt and "Veshti" (white unstitched cloth wrap for the lower body). He took to the streets and begged for votes and funds.

He was holding a yellow placard with the words "Give your vote as a donation. This place will become better", written in the Tamil language.

To target a specific section of voters, K.R. Jairam, another state ruling party candidate from the Singanalloor constituency, was seen selling vegetables.

In the photos, he is seen sitting on the roadside with other vegetable vendors.

​​D. Jayakumar, State Fisheries Minister, and a candidate from Royapuram played Kabaddi and campaigned at an indoor stadium.

​Elections for the 234 assembly seats in Tamil Nadu will be held on 6 April.