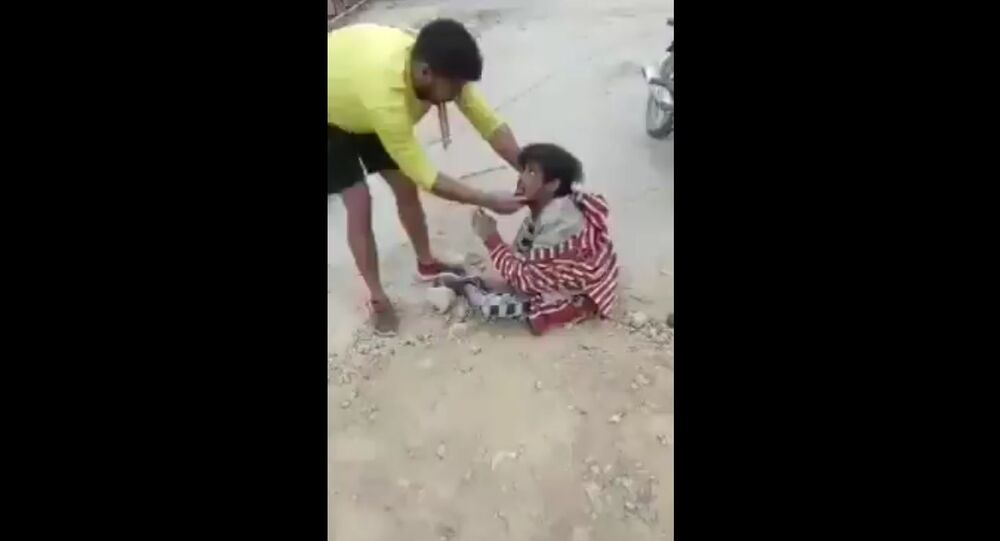 Last week, a Muslim boy named Asif was ruthlessly beaten by a Hindu man, Shiring Yadav, for drinking water from a temple hand pump in Ghaziabad, Uttar Pradesh. A video of the incident has since gone viral on social media, with netizens expressing concerns about the rising cases of Islamophobia being reported in India.

A man in tattered clothes has been brutally assaulted in Delhi by a Hindu man named Ajay Pandit.

While beating and pushing the man, whose name remains undisclosed, to the ground, Pandit and his friends can be seen asking him to chant "Hindustan Zindabad (long live India)" and "Pakistan Murdabad (death to Pakistan)".

A video purportedly depicting the incident has surfaced on social media in India, outraging netizens.

While there is no official information about the victim's religion, speculations floating around on social media suggest he is a Muslim man.

The attacker identified as Ajay pandit who was arrested in Delhi riots case too.
pic.twitter.com/7XZoMlUmbc

The beating goon is said to be Ajay Pandit, a resident of the old village Garhi Mendu, a boy of milk. And the incident is also near Khajuri Chowk.
@CPDelhi @DCPNEastDelhi
Please take into consideration.
@ndtvindia @aajtak @CNNnews18

This video is claimed to be from Khajuri Chowk, NE Delhi.

A poor guy is brutally beaten up and was forced to chant "Hindustan Zindabad, Pakistan Murdabad, @asadowaisi Murdabad".

​Pandit, who is the main accused in this case was also named in the 2020 Delhi Riots that resulted in the deaths of over 50 people, several of them Muslims, against the backdrop of amendments to India's Citizenship Act. He was arrested and later released on bail.

Updating people about the status of the case, Deputy Commissioner of Police (northeast) Sanjay Kumar Sain tweeted that Pandit has been arrested for assaulting the other man.

A video of Khajoori Khas incident is in circulation on social media. Cognizance of the incident has been taken and a criminal case has been registered. The accused has been arrested and investigation of the case is in progress.@CPDelhi @cp_delhi

​Police officials investigating the case have also revealed to the media that the victim in the video has also allegedly been involved in cases of murder and robbery, the details of which remain blurry to the public as of now.

UPDATE: Delhi Police says that that victim in the video was allegedly involved in cases of murder and robbery. In the above incident, a FIR has been registered under IPC section of assault and theft.