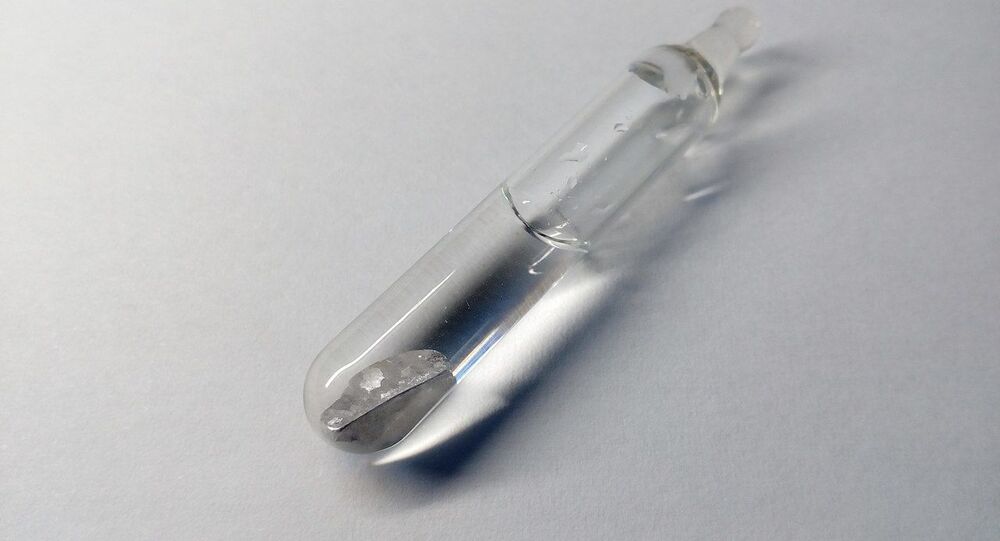 On 21 March, Devendra Mohan Sharma, 62, informed police about the death of his wife Anita Sharma at a Delhi hospital. He suspected his son-in-law of murdering her. Sharma is a manufacturer of homeopathic medicines.

A 37-year-old man has been arrested for allegedly trying to kill his in-laws and wife in Delhi by using the chemical element thallium, the police said on Thursday.

According to the police, the accused, identified as Varun Arora, was inspired by the ideas of former Iraqi President Saddam Hussein and his intelligence agencies who purportedly used thallium to eliminate political opponents.

In his complaint, Sharma alleged that in January, his son-in-law cooked fish laced with thallium and served it to his family members.

"Arora didn't eat it himself, neither did he feed the same to his twin children", a senior police official said, adding that Arora's wife has been in a coma since February while his sister-in-law died around the same time.

Speaking to Sputnik, a senior Delhi Police official revealed that following the complaint, a medical test was conducted on Mohan Sharma, and they found elevated levels of thallium in his blood.

"Similarly, a post-mortem and a forensic examination of his wife, Anita Sharma's body was conducted. We found that even Anita had high thallium levels. A case of murder under Section 302 of the Indian Penal Code was registered", the officer said.

Later, the police also conducted a medical examination of Sharma's daughter, who has been in a coma since February, and found that thallium levels were high in her case too.

"Arora was called for questioning but he didn't confess to the crime. On Tuesday evening, we conducted raid at his house and seized his electronic devices. On scanning his laptop, we found web pages related to thallium in his browsing history and many others on Saddam Hussein employing the toxin to eliminate his rivals", the officer said.

A detailed investigation revealed that Arora had ordered thallium through an online pharmacist after claiming that he and his father-in-law were making a homeopathic medicine for coronavirus. The person, who delivered the package and was traced by the police, identified Arora.

"During sustained interrogation, Arora broke down and revealed that he wanted to get revenge from his wife and in-laws over an incident that happened around half a decade ago".

"Arora's father had died around that time and soon after, his wife got pregnant. He believed the child would be his father's reincarnation, but due to some complications the foetus had to be aborted on the doctor's advice".