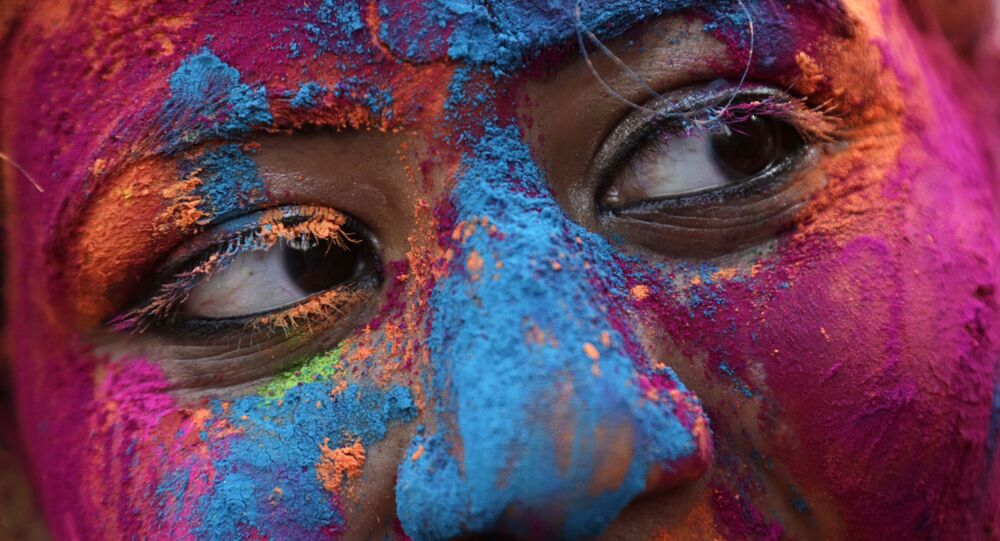 ‘Laddu Maar Holi’, or the Ceremony for Throwing Sweets is part of Hindu culture and is celebrated days ahead of the main festival of colours Holi. Celebrated in Uttar Pradesh state's Mathura area, devotees gather at temples, sing, dance and throw laddus (sweets) at each other which are then eaten as sacred offerings made to the God.

Amid a surge in COVID-19 cases in India, the appearance of thousands of devotees celebrating traditional 'Laddu Maar' Holi (Ceremony of Throwing Sweets) in Mathura district of Uttar Pradesh state without covering their face with masks, has left many netizens stunned.

The worshippers were participating in the annual celebrations at India's famous Shree Radha Rani Temple in the District's Barsana Town, to which thousands of Hindus flock at this time of year. The temple is dedicated to Goddess Radha, the consort of Lord Krishna.

Several videos are doing the rounds on the internet where devotees of Lord Krishna can be seen gathered in large numbers at the temple. and catching laddus (sweets) thrown at them by the temple workers.

However, looking at the scenes from the temple that have gone viral on social media, a section of netizens are criticising the temple authorities and devotees for acting irresponsibly during religious celebrations and risking others' lives.

Some are calling them “super-spreaders” and others are incandescent with rage over their behaviour and demanding the police and authorities book them and take strict action against the organisers and devotees.

@narendramodi @PMOIndia @drharshvardhan @DrHVoffice @ndtv isn't this a super-spreader event? How will you control Corona? UP & Uttarakhand soon to be super-spreader states https://t.co/7H1hlEeYlE

What's wrong with people? Are we not having a second wave ? Why was this allowed? @Uppolice #barsana #UttarPradesh #COVID19 https://t.co/eqpZIbyQFq

Criminal cases should be launched against each and every one of them. It isn’t about religion or beliefs, responsibilities should also be fixed. From police to administration, anyone and everyone who approved of this kind of gathering should be booked. https://t.co/tMukHqiwp6

Some netizens are also comparing the incident with the last year's Tablighi Jamaat movement where a large number of Muslims gathering at a mosque in Delhi were targeted for flouting COVID-19 restrictions by alleging that it led to a rise in Coronavirus cases in India.

Social distancing rules are only for Tablighi jamaat? https://t.co/0hwuuWbrhS

Hey @rahulkanwal @IndiaToday lets do a debate on how this 'Tablighi Bhakt' spreading corona https://t.co/GPofmbl28q

Some are having a jibe at them for pretending to be COVID-free and being reckless about contracting the coronavirus.

No mass hysteria here. No need to call them “super spreaders”. They won’t cause Corona. They have super powers. https://t.co/asT9i3jB27

In north India's Mathura region, Holi celebrations last for a week. It includes 'Laddu Maar Holi' celebrations, organised before the famous 'Lath Maar' Holi in which women hit men with sticks as they try to shield themselves as part of tradition.

The festival of colour is celebrated with much fanfare in different parts of the country and people colour each other, splash water, sing, dance and eat traditional delicacies such as Gujiya (sweet), Thandai (a milk-based drink), and Pakoras (fried snacks) among others.