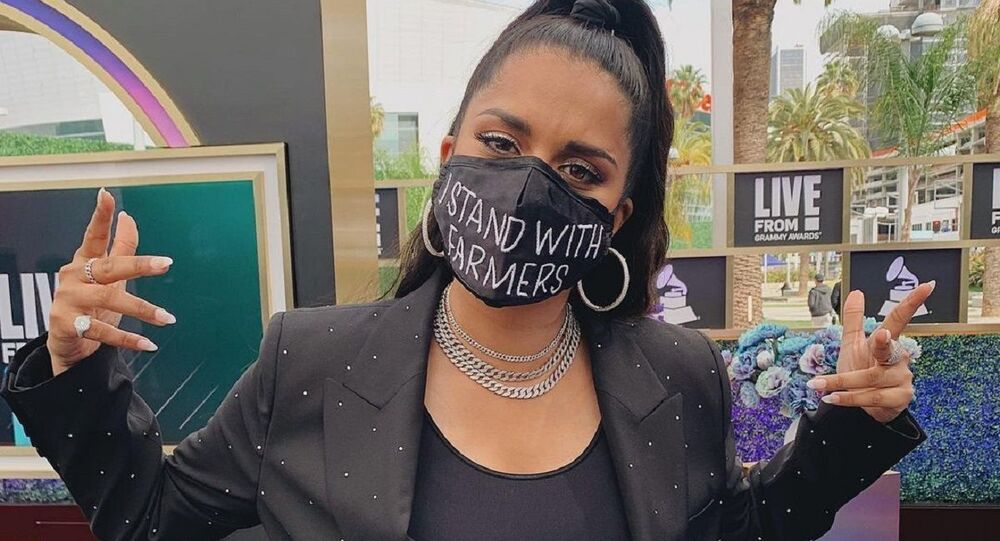 For over 100 days, thousands of Indian farmers have been camping on Delhi's borders, demanding that the Modi government repeal three new agricultural laws passed in September 2020. Several rounds of talks have taken place between the government and farmers, but the issue has not been resolved yet.

Indian-Canadian YouTuber and content creator Lilly Singh's appearance at the 2021 Grammy Awards wearing an #IStandWithFarmers mask on the red carpet hasn’t gone down well with a section of people on social media.

While some are praising her for her brave move for taking the farmers’ protests to the Grammys and making a strong statement of support, she is receiving a lot of criticism for allegedly doing this for attention and turning the #IStandWithFarmers into a fashion show.

Literally #IStandWithFarmers is now nothing but a fashion show 😉 https://t.co/JlJMFdZij2

Wearing a mask doesn’t mean standing along with them. If you seriously mean then come to india spend some time between Farmers and Government. Try to understand both side and then this show off really mean.

Wants to take full perks of capitalism, built her (now dead) career on YouTube (who are set to tax foreign creators in a while btw), stands at the evidently biased and racist Grammy awards. This is embarrassing, stop fishing for attention. https://t.co/MIGj2qqCez

You might wanna switch back to "Standing against Fascism" only if you wanna stay relevant any more given how The Farmer's Protest is nothing more than a joke now.
Dumb clown. https://t.co/HslKp8M5AE

​​One user asked her how much she was paid to make the post.

How much have they paid her? :P https://t.co/CqA1SfJE5M

Netizens have accused her of not being aware of the main issue about the farm laws and how it would be a disadvantage for the farmers.

Your message makes no sense. You’re not standing with farmers. You’re standing with rightwing wealthy upper-caste landlords who are anti-environment and want a medieval Khalistani theocracy. The real farmers are the labor they exploit.
Why do you back a reactionary movement?

​Many netizens lauded her for extending her support to farmers and drawing global attention by taking the matter to the Grammy Awards.

Lilly is not the only international celebrity who has come out in support of the farmers' protests. Earlier, international pop icon Rihanna, former adult movie star Mia Khalifa, climate activist Greta Thunberg, and many other celebs sparked a massive controversy for expressing their solidarity with the protesting farmers.