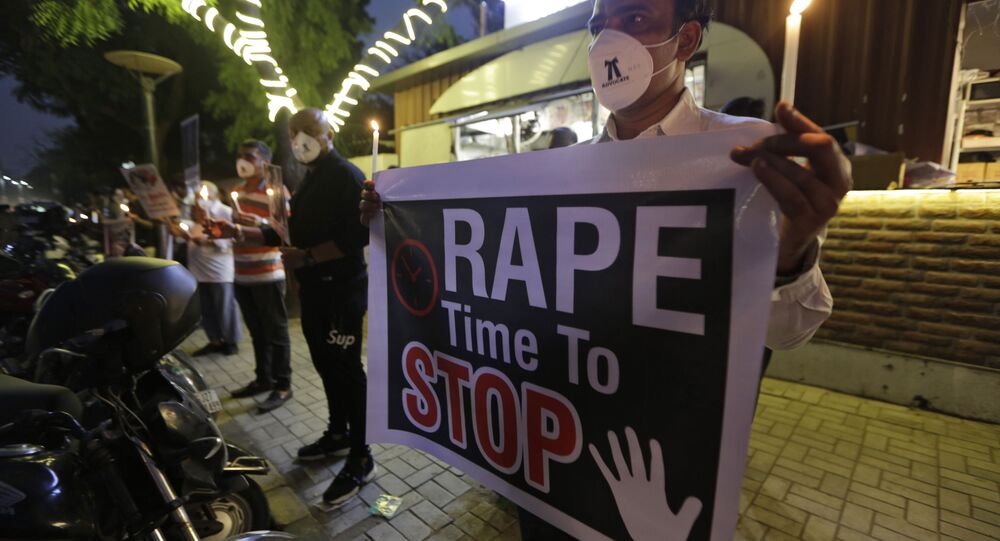 Just three months into 2021 several horrific rape cases have already made it to the headlines in India. In 2020, the National Crime Records Bureau (NCRB) released statistics that India recorded an average of 88 rape cases per day in 2019. Many rapes are not even registered in the country to protect victims from societal scrutiny.

In the desert state of Rajasthan in India, a 30-year-old woman was gang-raped by five men in front of her husband in a field near the Baran-Atru State Highway over the weekend.

© Photo : Hathras Police
Sex Offender on Bail Kills Victim's Father in India's Hathras, Video of Wailing Daughter Goes Viral
Without revealing the name of the victim, Vineet Kumar Bansal, Superintendent of Police, stationed in Rajasthan said the woman was returning home from a temple with her husband, when their motorbike was stopped on the highway by the five alleged rapists.

The accused tied up the husband so he could not fight back, as they took turns raping the woman.

The police have told Indian media that the woman had been married before but had separated from her former spouse. One of the five suspects is the brother of her former husband and the others are his friends, as per the victim.

Once the accused raped and left the victim and her new husband in the field, the couple managed to reach a nearby police station to lodge a complaint.

Talking about the victim, who was sent to a hospital for a medical checkup, the police officials also revealed that her family was not on good terms with the family of her ex-husband. Both families have previously lodged legal cases against each other.

At present, the police have not been able to nab the alleged rapists.

Netizens have expressed horror about this latest incident on social media.

Even Lucifer in hell may b shivering to hear these crimes on women!
Then what about d condition of gods who r worshipped&in whose names votes r garnered,oaths taken,govts formed&country is run!
OMG!
"Father,ForgiveThem..They Don'tKnowWhatTheyAre Doing.."
WordsofJesusfromCross!

Mind numbing to even think.of this.
What has our country come to. https://t.co/ua8ofsmdwK

​The news comes just days after 53-year-old Kailash Bohra, an Assistant Commissioner of Police (ACP) posted in Rajasthan's Jaipur was caught asking for sexual favours from a rape victim in exchange for a speedy probe into her case.

Bohra was caught by the Anti-Corruption Bureau (ACB) team that is still investigating the case.

According to the NCRB's 2019 statistics, Rajasthan reported the highest number of rapes among Indian states.

In India, rapists are punished with jail terms, life imprisonment, or capital punishment depending on the magnitude of their heinous act.