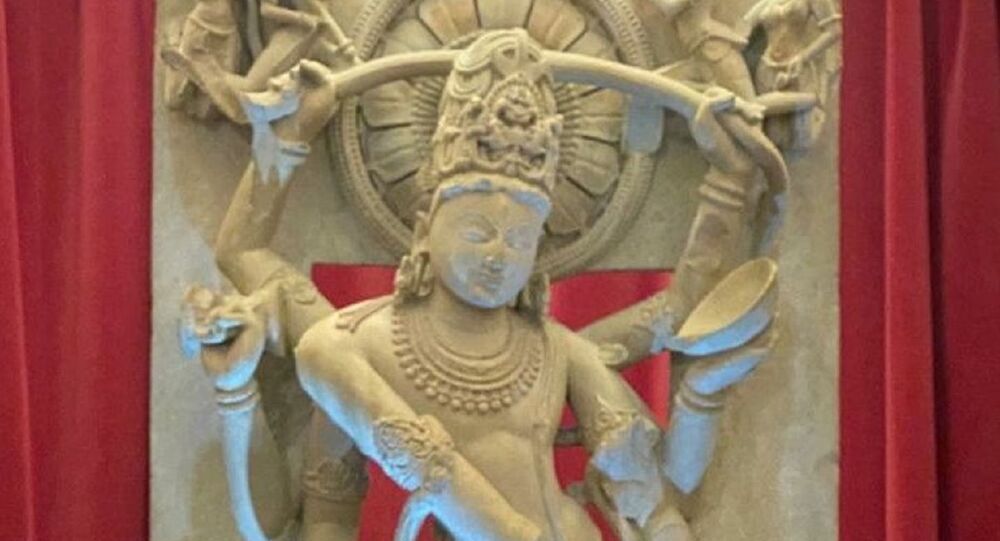 'Maha Shivratri': Shiva Worship Illuminates One of the Year's Darkest Nights in India, Here's Why

Hindus are polytheists who worship 33 million gods and goddesses. The “god of destruction” Shiva is worshipped as “Mahadev” or the “ultimate god”. Hindus believe that Shiva innocently grants all the wishes to his devotees and so festivals related to Shiva are of supreme importance.

Every year at the beginning of the summer season, Hindus celebrate one of the most auspicious festivals in India – “Maha Shivratri” which from Hindi literally translates as “the grand night of Shiva” in English.

© CC BY-SA 4.0 / RAJA SUGANTHI / Thillai Nataraja temple
Chanting Rises Higher at India's Thillai Nataraja Temple After 'God Gives a Sign'
The festival falls on one of the darkest nights of the year and devout Hindus spend the night awake, chanting hymns in praise of Lord Shiva for spiritual awakening. It is believed that observance of Shiva Ratri cleanses negativity and helps Shiva worshippers overcome darkness.

There are three mythological stories around this night, the first and the most popular concerning Shiva’s wedding to the eternal love of his life, Goddess Parvati. Another legend states that Maha Shivratri is around the time the stars aligned in a particular constellation, when Shiva, also known as lord of the dance, had performed “Tandav” – the cosmic dance of destruction, for the first time. Yet a third legend has it that on this night, Shiva came into being.

​So for Hindus, Maha Shivratri marks the existence and power of “Shiva-Shakti” – or the energy of the deity who is believed to reside on the Tibetan mountain Kailash in the Himalayas, which is off-limits to climbers.

In Hindu households, the day begins early in the morning with the sunrise. After bathing and offering prayers to Shiva at home, devotees flock to Shiva temples around them to offer the diety flowers, milk, holy leaves, fruits, sandalwood and cannabis (bhang), among many other things. Devotees also observe a day-long fast on this day.

Amid Sanskrit chants of “Om Namah Shivay”,  Shiva idols are washed with milk, honey and curd from head to toe as part of the elaborate prayer rituals. Devotees perform special traditional dances, also as part of their prayers.

Shiva, who wears a snake as a necklace, is the only Hindu god who is believed to accept everything that is otherwise rejected in nature as an outcast - like poisonous flowers, reptiles and spirits. In his most natural self, Shiva is known to use the ash of cremated dead bodies as a body powder - because he is the abode of everybody and everything that does not belong anywhere else.

Hinduism designates Shiva as a timeless source of energy that exists in flesh and bones, taking care of the universe as we know it. For over 21,000 years, Mount Kailash, which is 2,134 meters shorter than that the tallest peak in the world, Mount Everest, still stands un-climbed because Shiva is believed to be sitting there in meditation, holding the world together.