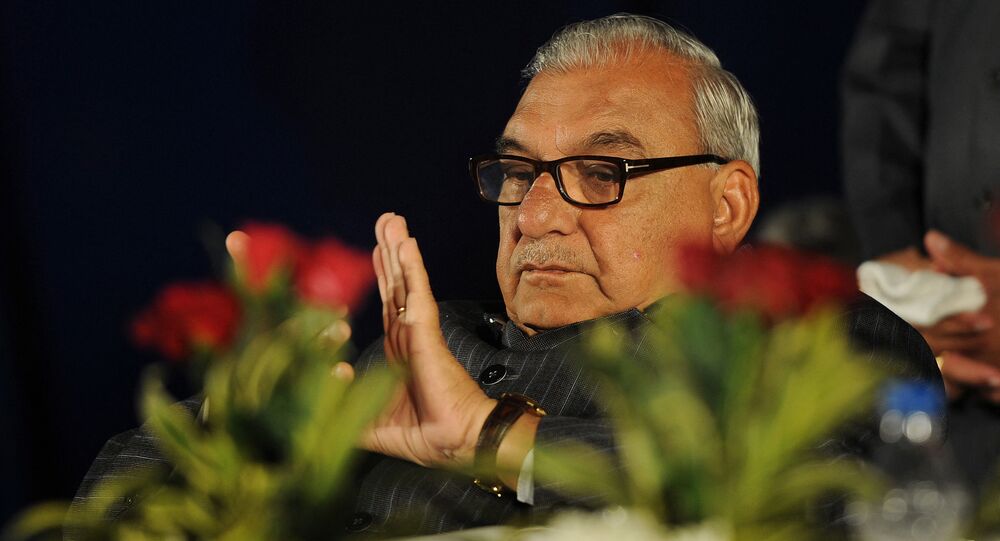 'When Rome Was Burning, Nero Was Fiddling': Ex-State Chief of Haryana Takes a Dig at Ruling BJP

Farmers from the country's food bowl, Haryana state, are at the forefront of ongoing protests against the new farm laws ushered in by the Modi-led government. Members of Opposition party said that the no-trust motion will bring clarity to the farmers about which members are not supporting them in their struggle to get the laws repealed.

Amid ongoing protests by thousands of farmers across the state of Haryana, the Bharatiya Janata Party-led government in the region has survived vote of no-confidence proposed by opposition Congress leader and ex-state chief Bhupinder Singh Hooda on Wednesday.

© AP Photo / Anupam Nath
Tractor-Driving Rahul Gandhi Protests Against Farm Laws in India's Kerala - Photo, Video
As many as 32 Members of the Legislative Assembly (MLA) supported the vote of no confidence and 55 members opposed it. The Assembly consists of 88 members and needs 45 votes to stay in power. BJP and its allies have a comfortable majority of 50 seats in the state along with support from certain independent members.

After the vote of no confidence was defeated, Hooda said he had asked the Assembly Speaker, Gian Chand Gupta, to allow a secret ballot but his request was denied.

"Had that been permitted the number of members supporting the vote of no confidence would have increased and the result would have been different," said Hooda.

Speaking in the state assembly, Bhupinder Singh Hooda had a dig at state chief Manohar Lal Khattar drawing a parallel with Nero in Rome.

"There is no precedent in the history of the state where  the state chief's helicopter is not allowed to land by people in the villages. Manohar Lal could not even unfurl the national flag in Panipat city on India's Republic Day on 26 January because of farmers' protests. He had to unfurl it in Panchkula city a few kilometres away from his residence. Yet he has his eyes closed. His condition is like Nero who was playing the fiddle when Rome was burning," Hooda said while speaking during the two-hour debate which preceded the vote of no confidence in the state assembly.

Meanwhile, on Wednesday, both Houses of Parliament were adjourned over the farm laws.

The newly introduced farm laws have led to massive protests by farmers with thousands camping on the outskirts of Delhi demanding the laws be repealed.

Both the Rajya Sabha and Lok Sabha have been adjourned until 15 March after repeated disruptions by the Opposition over the contentious farm laws introduced by the Modi government in September last year.