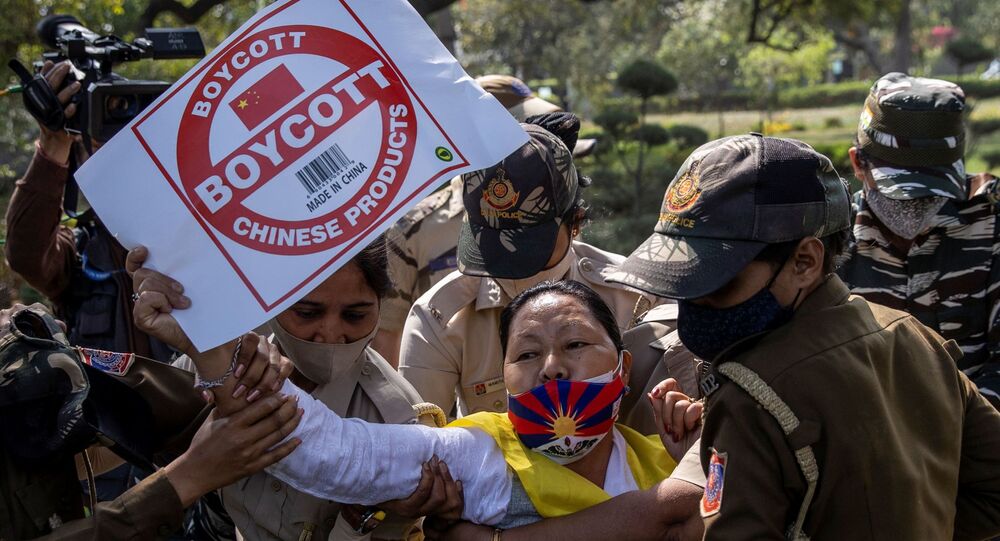 Since 1951, the mostly Buddhist land of Tibet has been governed as an autonomous region of China. Beijing claims sovereignty over the region, which because of its great altitude is also called the “roof of the world”.

Barricades and heavy security were deployed outside the Chinese Embassy in the Indian capital of New Delhi as a group of Tibetan Youth Congress members staged a protest, marking the 62nd anniversary of the Tibetan National Uprising on Wednesday.

​Observed on 10 March each year, the day commemorates the 1959 Tibetan uprising against the presence of the People's Republic of China. At the time, the armed rebellion failed against China and resulted in a crackdown on Tibetan independence movements.

#TibetanUprisingDay, observed on 10th March, commemorates the 1959 Tibetan uprising against the Chinese Communists in #Tibet. After the failure The Dalai Lama could escape to India. The world remembers the '1959 Tibetan uprising' and those who bravely fought for the #DalaiLama. pic.twitter.com/0hwzcw3HB9

Videos of protesters chanting pro-Tibet slogans in the town of Udhagamandalam (also known as Ooty, a resort in the western Ghats mountains in Tamil Nadu state, right down in the south of India) have also surfaced online. Ooty houses one of the most famous Tibetan markets in India.

Tibetans in Ooty commemorating the 10th March Uprising day. Covid protocols were followed with everyone wearing masks. Here the Tibetans all gathered at the parking ground of the Tibetan Market with chants of solidarity for Tibet #TibetanUprisingDay #tibetansofooty pic.twitter.com/U3WIyNXv96

​Hundreds of protesters also flocked the streets of Taiwan’s capital Taipei to mark the 62nd Tibet Uprising day against mainland China. Slogans such as "Free Tibet, China out", "Tibet belongs to Tibetans" and "Long live the Dalai Lama!" echoed in Taipei.

Tibetans took on the street to memorize the 310 uprising on Mar, 7, Taipei. Chanting “Let Dalai Lama go home” and “Tibet belongs to Tibetans.”
62 years, Tibetans in exile are still striving to return to their homeland. pic.twitter.com/A1LZXepA5e