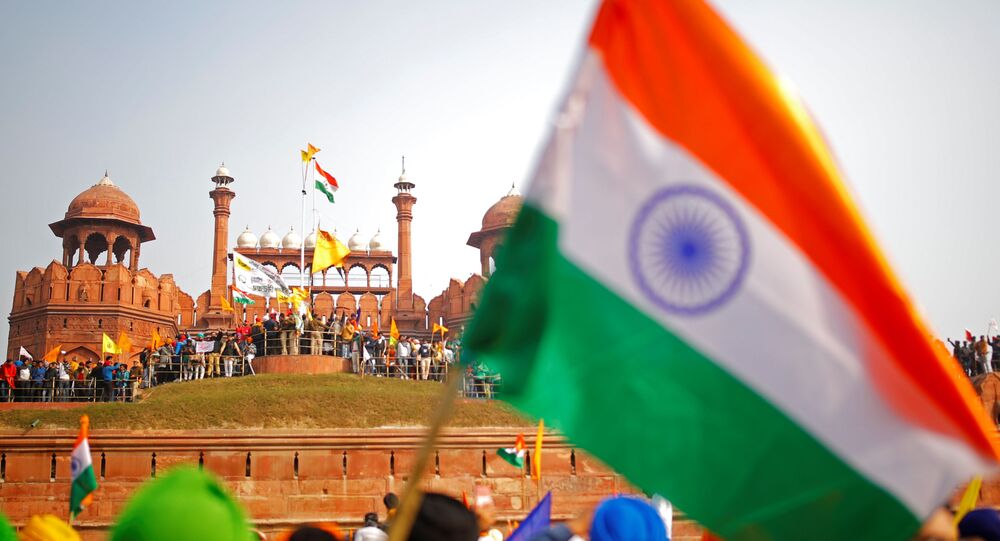 On 26 January, India's capital witnessed mayhem and violence at the iconic Red Fort on the country's 72nd Republic Day. During a tractor rally in Delhi protesting farmers and police clashed, leaving around 400 law enforcement personnel injured.

Two people, including a Dutch national, have been arrested in connection with the Red Fort violence on 26 January, India's Republic Day, officials said on Wednesday.

According to the police, accused Maninderjit Singh, a Dutch national living in the UK, is a habitual criminal and was arrested at the Delhi Airport when he was trying to flee on forged travel documents. The second accused, Khempreet Singh, had assaulted police personnel on duty inside the Red Fort with a spear.

"We found video footage of Maninderjit involved in [the] Red Fort violence. He was also a part of the riotous mob and took [an] active part in it. He was trying to flee from India, from Indira Gandhi International Airport [using] forged travel documents...", Monika Bhardwaj, Deputy Commissioner of Police (Crime Branch), said.

The police said that a Look Out Corner notice had also been issued against Maninderjit to ensure that he does not flee the country. As per his plan and arrangements, he was to fly from Delhi to Nepal and then to the UK.

"With the help of local informers and technical surveillance, Khempreet was arrested from Delhi. During the investigation Khempreet disclosed that on 26 January, he along with his associates joined the unruly mob (tractor rally) and reached the Red Fort after breaching the police barricades at several places", Bhardwaj added.

So far, the Delhi Police have registered 44 cases and arrested over 150 people including actor Deep Sidhu.

On 26 January, protesting farmers did not follow the prearranged route by Delhi Police and broke barricades to enter the Indian capital. The protesters clashed with police, and vandalised property in several parts of Delhi during the farmers' tractor rally. They also entered the iconic Red Fort and unfurled their flags from its ramparts.

The farmers had arranged a tractor rally on India's Republic Day to reaffirm their stance on the Prime Minister Narendra Modi-led government's farm reforms that they demand be repealed.