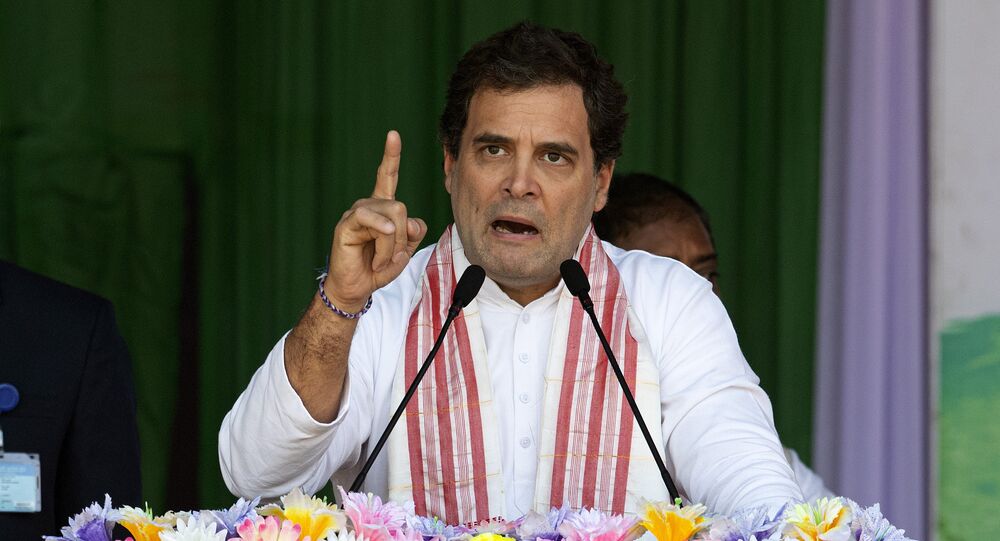 Rahul Gandhi is the first member of the Gandhi family who has publicly described the Emergency period as "wrong". While campaigning for the national elections in 2019, he apologised for the Emergency period, imposed between 1975 and 1977 by his late grandmother Indira Gandhi, who was Indian prime minister from 1966 to 1977 and 1980 to 1984.

Congress's ally, the Nationalist Congress Party (NCP), has praised Rahul Gandhi for owning up to the party’s past mistake of Emergency and calling it “wrong”.

An Indian court found Indira Gandhi guilty of misuse of government machinery while fighting the 1971 national elections. She had won this election with a large majority. However, the Uttar Pradesh court cancelled the election and barred her from fighting elections for six years. The court's decision meant Indira Gandhi would have had to leave the post of Prime Minister. So, she imposed the 21-month-long Emergency in the country from 1975 to 1977, stating that the move was vital to control "internal disturbance".

During this time, anyone who voiced opposition to Indira Gandhi's government was imprisoned. Media reports state 111,000 people were arrested, including civil rights activists, writers, journalists and opposition leaders. The press was censored too.

Now political analysts question the timing of Rahul Gandhi's remark and consider it a means to woo voters as elections in four states and one union territory are scheduled to begin later this month in India.

On Tuesday, Rahul Gandhi said the imposition of Emergency by the Congress government led by his grandmother and former prime minister Indira Gandhi was a "mistake".

​"I think that was a mistake. Absolutely, that was a mistake. And my grandmother said as much. [But] the Congress at no point attempted to capture India's institutional framework. It does not even have that capability," Rahul Gandhi said in a virtual interview with renowned economist Kaushik Basu who is a professor at Cornell University.

Applauding Congress leader Rahul Gandhi, Doraisamy Raja, general secretary of the Communist Party of India (CPI), told Sputnik: “Emergency was a mistake. CPI supported the Emergency when it was imposed. But, later we too accepted that it was a mistake to support Congress in imposing Emergency.”

Raja said: “Rahul Gandhi is showing his political maturity by apologising for Emergency,” while questioning whether "Bharatiya Janata Party (BJP) and Indian Prime Minister Narendra Modi will apologise for the 2002 riots."

The 2002 riots in the Indian state of Gujarat left more than 1,000 people, mostly Muslims, dead. They broke out after 58 Hindu pilgrims were charred to death when their train coach was set on fire at the Godhra railway station on 27 February 2002. The cause of the fire on the train coach still remains unknown. The incident occurred when the present prime minister, Narendra Modi, was state chief.

Congress ally, the Nationalist Congress Party (NCP) in the state of Maharashtra agreed with the CPI leader. A spokesman and minister for NCP, Nawab Malik, told Sputnik: "The Congress leader has owned up that the 21-month-long Emergency imposed in 1975 was a mistake. Now, will Prime Minister Modi and the BJP also admit that the 2002 Gujarat riots were a blunder?”

Condemning Congress Party for imposing Emergency, the BJP minister in the Indian state of Haryana, Anil Vij tweeted: "It is not enough for Rahul Gandhi to accept that the Emergency imposed by his grandmother in 1975 was a mistake, since anti-democratic and dictatorial thinking is still alive in Congress".

"Indira Gandhi may not be here, but the rest of the leaders who supported the Emergency are still active in the Congress," Vij posted on his Twitter handle.

Kidwai, who has written books on the Congress party and its leaders, added: "The timing of the apology is crucial for Congress - as well as for Rahul Gandhi. He needs to spin his public image. He needs a win and that will speak for him."

Elections in West Bengal, Tamil Nadu, Kerala, Assam and Puducherry are scheduled from 27 March and Congress is not a ruling party in any of these four states or union territory.

Since last week, Rahul Gandhi has been on the campaign trail in the southern states of Kerala and Tamil Nadu to woo voters. He was also elected to the lower house of parliament from Wayanad district in Kerala.

On 24 January 1978, while addressing a rally in the Indian state of Maharashtra, Indira Gandhi apologised for the iniquities of the Emergency period she had imposed in 1975.

It takes a great leader courage and humility to acknowledge one's mistakes and learn from them. pic.twitter.com/agkcYOBFci