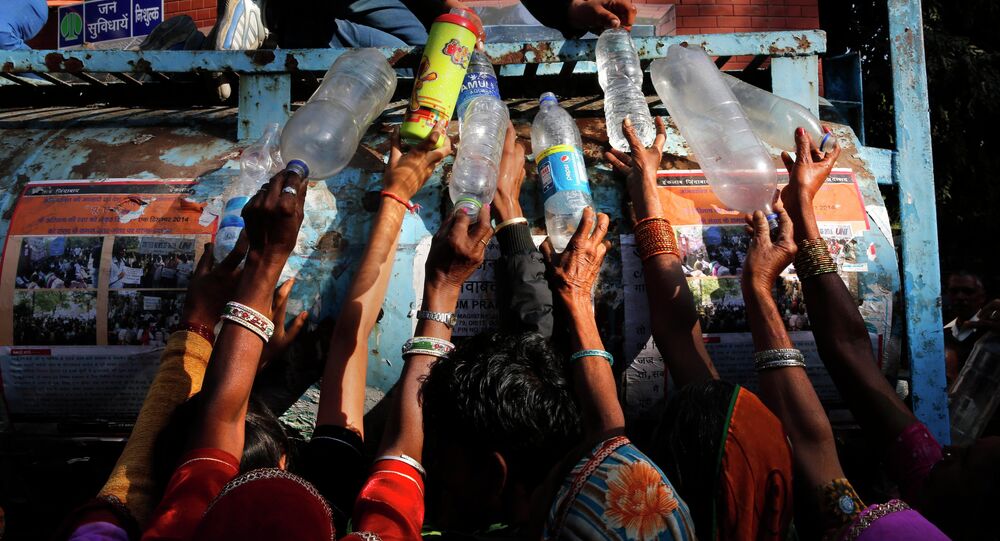 Dying of Thirst? India's Capital Delhi May Run Out of Water This Summer

Since the Bhakra Beas Management Board (BBMB) central government water agency plans to shut down the Nangal Hydel water channel from 25 March to 24 April, it would cut off 232 million gallons per day of water that the city gets from the Ravi and the Beas rivers, according to Delhi water board vice-chairman and AAP leader, Raghav Chadha.

With a population of about 20 million, different parts of Delhi are generally found struggling for adequate water supplies, especially during summer.

Usually, the city government-administered Delhi Jal Board supplies water in the morning and evening. In view of the city’s water problems, the government also keeps appealing for water conservation measures.

The city gets its water from the Himalayan rivers of Ravi and Beas, as well as the Yamuna and Ganges rivers. The water of Ravi, Beas, and Yamuna is provided through the Nangal Hydel channel and Munak Canal.

This year, residents of Delhi appear to be facing a major crisis following an announcement that the Nangal Hydel channel may be closed for almost a month.

Since this represents around one-fourth of the total water supply for the region, the channel’s proposed closure is likely to lead to an unprecedented water crisis in the city.

The ruling Aam Aadmi Party (AAP) leader and senior water board official, Raghav Chadha, raised concerns on Thursday over the channel’s closure, suggesting that the city may not be able to cope with the fallout.

Talking to Sputnik, Chadha said the situation "could lead to an unprecedented water crisis and even law and order situation".

He also said that the state government had written to the central government, the Haryana government and the Bhakra Beas Management Board (BBMB) to request postponing the repair of the Nangal Hydel channel.

The BBMB is a central government agency that controls the supply of water and power from Bhakra Nangal and Beas projects to the states of Punjab, Haryana, Rajasthan, Himachal Pradesh, and union territories of Delhi and Chandigarh.

Speaking to Sputnik on the water supply system in Delhi, Bhim Singh Rawat, associate coordinator of the South Asia Network on Dams, Rivers and People (SANDRP), said, "The closure of Nangal (Bhakra water) Hydel channel would certainly fuel the water crisis in Delhi."

SANDRP is an NGO working on rivers, large-scale water infrastructure and social impacts, performance, and issues related to the governance of rivers and dams.

Stating that "the national capital is entirely dependent on other north Indian states for water supply," Rawat said: "Every month, Delhi is facing some water crisis. [Due to] Glacier flood in Uttarakhand state, water connection in Delhi got disrupted," he said.

Earlier in February, water supplies in parts of the south, east and north-east of Delhi were affected after silt and debris from flash floods in Uttarakhand state's Chamoli district increased turbidity in the Ganges river, causing the Delhi water agency to operate at a reduced capacity.

"Similarly, during winters, ammonia levels in Yamuna river rise and the water supply in Delhi is affected," Rawat said.

The Nangal Hydel channel supplies approximately 232 million MGD to Delhi, a city of about 20 million.

"No such major closure has happened at least in the last five years. Minor closures keep happening but nothing that can have such a significant impact on the water supply," says Rawat.

Rawat, who has been raising the issue of water disruptions in Delhi and pollution in the Yamuna river, stated that Delhi needs a long-term water plan.

According to Rawat, the level of Delhi’s groundwater aquifer has been consistently dropping over the last two decades, leading to 90 percent of the city categorised as semi-critical or critical.

"The city can't be self-sufficient due to its geographical location. It is dependent on other north Indian states, but, if planned wisely, it can surely create a water bank for itself."

Rawat said the Delhi government has many policies on rainwater harvesting, but implementation remains problematic.

The city receives about 600 millimetres of rainfall annually, primarily during the monsoon season (July to September).

"This water can be used to recharge water bodies and recharge the groundwater level. But, sadly, everything is only there on paper. When will it be achieved 100 percent on the ground? We have to wait and watch for it," he suggested.

'I'll Do it Again': BJP Leader Slammed for 'No Regrets' Over Speech That Escalated 2020 Delhi Riots

A Year After Delhi Riots Residents Still Live in Fear