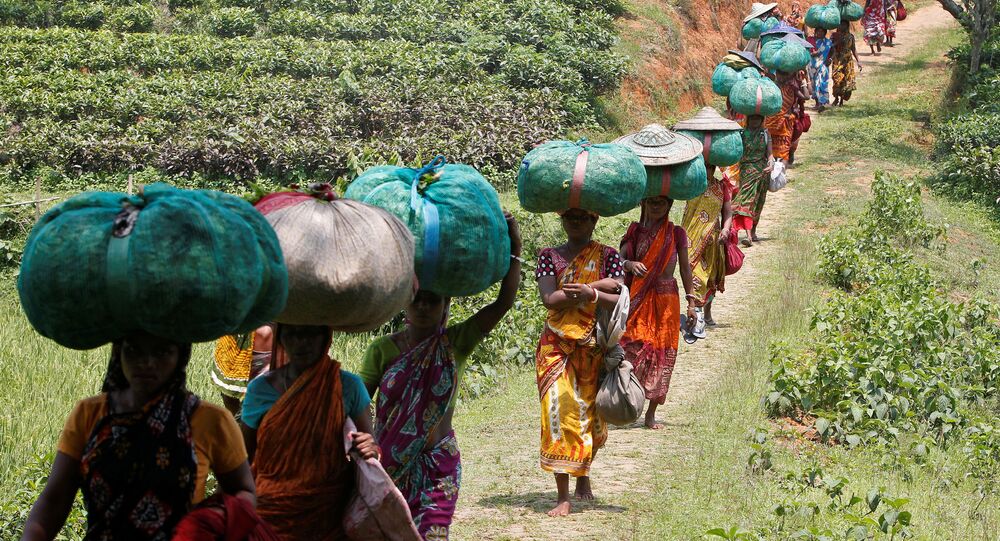 A complaint by the activist group Legal Rights Observatory (LRO) alleges that Oxfam has been acting at the behest of competitors of Indian tea producers to affect the country's image on foreign markets. In 2019, Oxfam alleged that Indian tea workers face long working hours for measly pay and suffer deplorable living conditions.

Global anti-poverty non-profit organisation Oxfam is currently being investigated by authorities in the Indian state of Assam for running a "motivated campaign" against tea plantations in the northeastern state, Sputnik has learned.

The investigation against the United Kingdom-founded and Nairobi-headquartered NGO kicked off in February of last year. It started after a complaint by the activist group Legal Rights Observatory (LRO), who had written to the federal Home Ministry to probe the "conspiracy" against Assam's tea industry following Oxfam's damning investigation deploring the rights of tea workers in the state, as it urged other countries to stop purchasing tea grown in Assam's gardens.

LRO's complaint, which has been seen by Sputnik, alleges a "sinister plot" by Oxfam and other allied NGOs to "destroy the reputation of Assam's tea".

It warned of a "massive digital campaign" by the NGO to malign India's image, adding that the Indian government would be faced with an uphill task in correcting the perceptual bias against Assam's tea in other countries if Oxfam was not stopped from carrying out its campaign.

"The Indian government is now faced with the task to defend its own tea industry because thousands of stories pertaining to the so-called pathetic state of Assam tea workers have already made their way to international media and human rights groups", states the complaint, referring to the #TruthAboutTea hashtag that has been actively promoted by Oxfam over the last two years.

In the FAQs section of the #TruthAboutTea website, Oxfam urges consumers across the world, particularly in India, to use their "influence" to end the suffering of tea workers.

The LRO complaint alleges that Oxfam's charges against the tea plantations have severely affected India's "business image" in the eyes of other countries.

The complaint was referred to Assam's chief secretary in February of last year, following which an investigation against the Oxfam "campaign" was ordered at the local level.

Currently, the authorities in Assam are in the middle of ascertaining whether Oxfam was "influenced" by foreign competitors of the Indian tea industry.

Assam has often been described as the largest tea producing region in the world by the Indian Tea Association (ITA), an apex body comprising the country's tea growers.

India is number two in terms of tea production, second only to China.

As part of its global campaign to raise awareness about Assam's tea workers, Oxfam and India's Tata Institute of Social Sciences (TISS) carried out a study involving 510 workers working at 50 different tea plantations in the state.

The study's findings, which have raised hackles among the ITA and Assam government alike, point to 13-hour work days, poor sanitary conditions, and inadequate housing facilities for tea plantation workers.

"It is predominantly women who carry out the labour-intensive job of harvesting tea and end up being concentrated in these low-paid jobs. Women tea workers, including unpaid domestic work, undertake up to 13 hours of physical labour per day after just six hours rest. Despite their large numbers, they remain underrepresented in trade unions", the finding says, as per notes available with Oxfam.

The Oxfam investigation also revealed that most of the revenues earned from tea production is pocketed by corporations, leaving the workers with 2-3 percent of the overall profit between them.

"A 200 gram packet of branded Assam tea is sold in India for INR 68 (less than one dollar). Of this, less than INR 5 is left for workers (using plucking costs as a proxy indicator) while tea brands and supermarkets retain around INR 40", the Oxfam investigation found.

Oxfam India CEO Amitabh Behar has been reached out to for a comment on the ongoing government probe against the group's "digital campaign". The article will be updated once he gets back with a response.