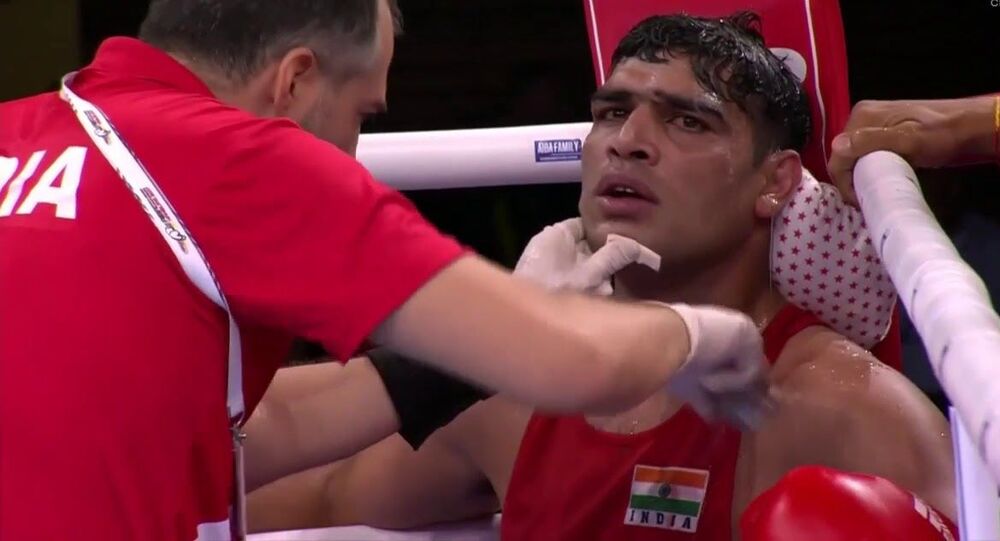 'I Want to Return Home With a Medal': Indian Heavyweight Boxer Satish Kumar on His 'Olympic Dream'

Indian boxer Satish Kumar comes from a small town in the Indian state of Uttar Pradesh. Following in the footsteps of his elder brother, Satish joined the Indian Army, where his two coaches made him take up boxing as a sport. Now he has medals from the Asian Games, Asian Championships and the Commonwealth Games.

Indian boxer Satish Kumar has his eyes set on an Olympic medal in the 91kg+ category. The 30-year-old boxer was the first Indian to book a berth for the Tokyo Olympics. He shares with Sputnik how he once had no idea about the sport; today he dominates India's super-heavyweight scene.

Sputnik: How was the Indian Army instrumental in evolving you as an amateur boxer?

Satish Kumar: My journey of boxing began with me joining the Indian Army. The coaches in the Indian Army spotted the talent in me, trained me, gave me the opportunity and made me a fine boxer. They were impressed with my height (6 feet 2 inches) and build.

The whole and sole credit for me taking up this sport goes to the Indian Army. I had no idea about this sport before I joined the forces. I was put in the 91+ kg category that I still continue to play in.

​Sputnik: After playing matches in the domestic circuit, did you ever feel you would get to play in the international arena?

Satish Kumar: I got my first national medal when I participated in the National Games, which were held in the Indian state of Tamil Nadu in 2011. However, before this, I had already started participating in several boxing championships which were organised by the Indian armed forces. In my category, I was beating all the boxers who came from different units of the forces – be it Indian Navy, Air Force or any other unit. Known as the "Services Platform”, it was a big stage that took me places and has brought me huge honour.

I had no experience playing with international players or fighting with Indian players who had international exposure. In 2011, I had thrashed strong contenders like Paramjit Samota, who was established and was a Commonwealth Games gold medallist.

In 2011, I never knew I would represent India one day in the Olympics.

Sputnik: Were you ever nervous seeing your well-established contemporaries whom you were competing against?

Satish Kumar: The moment I used to descend the ring, it never occurred to me that my opponent was more established than me. I only focused on playing the sport well.

What worked for me was my love for the game, following all the advice of my coaches; I kept training and made the most of the opportunities that I got. This led to constant improvement of my game and I kept moving up the ladder.

Sputnik: How does it feel to be the first ever Indian to book an Olympic berth in the 91kg+ super-heavyweight category?

Satish Kumar: This is my first chance to participate in the Olympics and I am the first Indian boxer ever to have qualified in this 91 kg+ weight category from India. I am very happy and looking forward to the tournament.

However, the journey to reach the Olympics has been a little long. When I started competing in the domestic circuit, I had no idea that I might be able to play the sport at an international podium. By the time I started competing I realised, most opponents whom I was fighting with were already established players.

Not only did I represent India, I won medals at the Asian Games, Asian Championships and the Commonwealth Games and finally booked a berth in the Olympics.

I made a place for myself by beating boys who were much ahead of me in rankings.

Sputnik: You recently mentioned that the qualifier match for Olympics 2021 was just a trailer, and that the world will see the picture at the Tokyo Olympics?

Satish Kumar: I believe in a lot of hard work and I do all that my coaches tell me. I want blessings from all my fans and fellow citizens so that I give a tough fight and come back home with a medal.

I eat, sleep and drink boxing and I have been following this schedule for the last decade or so, and now time has come to make the Olympic dream a reality. I will give my 1000% to win the medal.

Apart from the credit to the Indian Army, and my dedication to the sport, my family has also sacrificed a lot for me to be where I am today.

Sputnik: Is there any player in your category from whom you feel threatened

Satish Kumar: The reigning World No. 1 from Uzbekistan, Bakhodir Jalolov, is a tough opponent. I had a bout with him in the India Open in 2018. I find him threatening.

Sputnik: Have you ever thought of becoming a professional boxer?

Satish Kumar: To date the thought of turning into a professional boxer has not crossed my mind. My only focus is a medal for my country from the Olympics.